The Characters of Castlevania

There have been a lot of characters in the Castlevania series. Although the series original started out as the adventures of Simon Belmont against the forces of Dracula (one hero, six bosses), with the second game reusing a few of those same bosses (adding in one new one: Carmilla), the series quickly got out of control, adding in a different Belmont, Trevor, and three other heroes -- Grant, Sypha, and Alucard -- plus a bunch of new bosses all within the third console title for the series.

From there it just went off the rails -- each new game seemed to feature a new Belmont (or some other related kin) and newer and more different bosses were thrown in just to keep things "fresh".

That's where we come in. We at the Inverted Dungeon feel it's our duty to try and make sense of the convoluted continuity, and we'll do our best here to give context for every hero and villain, talking about their personal stories, what games they were playable in, and where you, the gamer, should go for your best fix of heroic vampire slaying goodness. Heroes are presented in alphabetical order by clan (with their first chronological game in parenthesis):

(Note: Where possible we will also include any historical, mythological, and/or pop-culture context we can for the origination of these characters.)

Leaders of the charge against Dracula, the Belmonts have been the primary hero of the series since 1094 AD (or 1450 AD, or 1046 AD, depending on the continuity you go with). They are the first, last, and best line of defense against Dracula and the forces of evil under the demon prince's command.

Due to the questionable story of Castlevania: The Arcade, we're not sure if the whip-wielder in that game is a Belmont or not, or even what his story may be.

The magical counterpoint to the Belmont's whip-wielding clan of warriors, the Belnades is a clan of witches who use their magical abilities to battle Dracula and keep the lands of Wallachia safe from the demons and devils that regularly appear.

One additional playable sorceress is included (as a secret character) in Castlevania: The Arcade. While the character, the Little Witch, does use the Belnades spells, there's just not enough story available for us to know who she really is.

Additionally, Camilla Fernandez, a minor villain in Castlevania for the Nintendo 64, was technically a member of the Belnadez caln, at least before she was turned into a vampire by the evil Actrise.

Introduced in Castlevania: The Belmont Legacy, this clan acts as protectors of the Vampire Killer during the time of Christopher Belmont... and possibly beyond.

Keepers of the Whip

After 1800, the Vampire Killer passes hands among many of the Belmont kin (and other powerful heroes). These are the Keepers of the Whip, the few mighty warriors entrusted to protect Wallachia in the absence of the Belmont clan.

Alongside the Belmont and Belnades clans (along with the other clans that have been entrusted to carry on the legacy of the Vampire Killer) there have been a selection of notable heroes that have taken up the charge of defeating Dracula and ridding the world of his foul curse.

A female hero is also available in Castlevania: The Arcade. Called the Lady Gunner, very little is known about her (beyond the fact that she uses a gun).

And if you're interested in see how all these heroes stack up, we have a look at the various bonus character modes from throughout the Castlevania series. 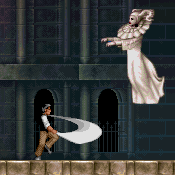 Along with the playable characters of the series, additional heroes have cropped up who have done their part to try and fight the forces of darkness. Weapon in hand, their attempts have helped to bring down the minions of evil.

And then we have a selection of aides, allies, and non-player characters who influence the quests of the heroes and serve to further the plot and adventures.

Standing opposed to the Belmonts (and other heroes) are Dracula and his forces of darkness. These leaders of darkness hope to further Dracula's agenda, growing his power to one day take over the world.

Aiding Dracula is a motley assemblage of villains and tricksters, beasts and beings of great power and evil intent who seek to further Dracula's nasty plots and schemes.

And then there are the lesser foes, recurring villains and one-off monstrosities who populate the castles of darkness and seek to destroy the heroes to secure the rule of evil across Wallachia... and the world.