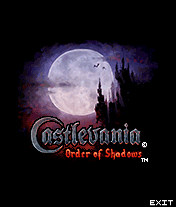 In the modern world we live in we take it for granted that many games will come out on the various devices we use. Classic games get ported from older systems to our hand-held game platforms (such as the Nintendo storefronts like DSiWare, or into the various cellphone "Play" stores), modern games come out on the cutting-edge home consoles, and even some games get ported over to phones and tablets (or have weird little side-iterations, such as Castlevania Puzzle: Encore of the Night). The Castlevania series has seen its fair share of these ports with various entries in the series (such as the original Castlevania, Aria of Sorrow, and Dawn of Sorrow) seeing mobile-friendly ports for cellphones (some to varying levels of success).

Completely new games for phones, though, are rare for the Castlevania series. The one completely new game for the series on phones, Castlevania: Order of Shadows, didn't exactly set the world on fire when it was released, and for many readers, this may be the first time you've even heard of the game at all. Developed and published by Konami, the game was released only on cellphones (albeit for all the major carriers), and only in the U.S., limiting its worldwide reach and general accessibility for all players.

Handled by Konami's Mobile branch, Order of Shadows follows the adventure of yet another new Belmont, Desmond, as he battles against the titular Order to save the lands of Romania. Desmond does this through a simplified Metroidvania game -- collecting items, doing a modicum of leveling up, and exploring the fortress of the Order all to stop the evil cult leader, Rohan Krause, from resurrecting Dracula and plunging the land into darkness.

While conceptually a Metroidvania game on mobile phones could work (as we noted, both Aria and Dawn had marginally successful ports), Order of Shadows is a rather flawed title. The game was too simple, too easy for modern fans' tastes, and the graphics and sound weren't up to par for even the more current modern, portable titles. These were odd flaws as other comparable games for the era (the aforementioned mobile Aria and Dawn, which came out in the next two years) look much better than this title. The game seems like it's trying to Game Boy Advance-levels of graphics, but the phones either didn't have the processing power to match the GBA's capabilities, or simply Konami Mobile wasn't up to the task building this title the right way.

Certainly Konami had the right idea in trying to make a new Castlevania game for phones. That said, Order of Shadows was simply not their best effort. It's slow, it's plodding, its muddy looking, and it lacks the thrill of the mainline series. Konami seems to have understood this as, after the release of Order of Shadows, Konami took the franchise away from their internal Mobile group and passed the reins off to Glu Mobile, Inc. for development of the two Sorrow titles.

The Story of Order of Shadows:

Nearly 100 years after Dracula's first defeat at the hands of Christopher Belmont, an order of his followers arose dedicated to the mission of resurrecting their lord, Dracula once more. Led by cult leader Rohan Krause, this Order of Shadows wanted to cover the lands in darkness, letting the Dark Prince bring about the promised dominion of humanity.