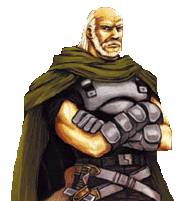 The Castlevania storyline is really a tale told in four eras: the rise of Dracula (who may not have even been Dracula in the beginning), the era of war between Dracula and the Belmont clan, then a time when the Belmonts weren't around and others had to take over the famed clan whip, the Vampire Killer, followed by the future after the final death of Dracula. Taking place in 1830 AD, the first entry on the Game Boy Advance, Castlevania: Circle of the Moon is set specifically in the "Era with Belmonts" (not to be confused with the Year Without a Santa Claus), and the clan of hunter that keep the whip safe.

Well, maybe... Certainly the clan, the Baldwins, have a whip which they call the "Hunter Whip", and it has the power to defeat vampires (Dracula included). But depending on who you talk to, the whip may not be the Vampire Killer (this despite it being able, through magic, to take on the flame and thorn properties of Simon Belmont's version of the whip). It could very well be a magical whip created by the Morris clan after the Belmonts, and their famed whip, go missing.

There's actually a lot we don't know about this version of the era, specifically because Konami, under the leadership of IGA, removed Circle of the Moon from continuity. While it slots in nicely in the Era without Belmonts, keeping to the story tropes that were to follow as IGA explored this specific era, Circle itself never had further sequels or exploration to define its larger story. It's a pity, too, as there were interesting characters, Morris Baldwin included, who would have benefited for exploration of their history. Certainly, at a minimum, there was a tale to tell about the whip (Hunter or otherwise) with it was controlled by Morris on his adventure against Dracula. Sadly, especially not with the way Konami treats the franchise, we're unlikely to ever see that story. 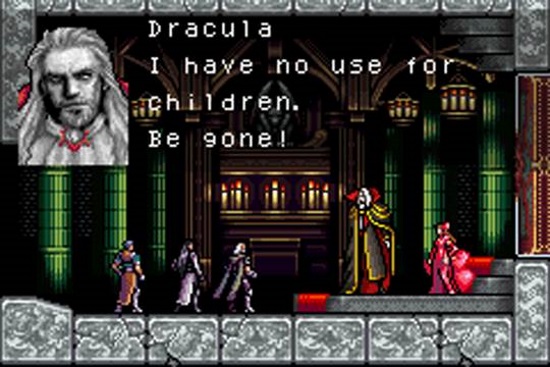 Ten years before the events of Circle of the Moon (circa 1820 AD), Morris Baldwin went to Dracula's newly arisen castle to take on the Prince of Darkness and stop his evil from spreading across the land. In his effort, wielding the Hunter Whip with extreme prejudice, Morris did defeat Dracula. However, the two vampire hunters that joined him on the quest, the parents of Nathan Graves, were killed in the battle leaving the young boy an orphan. Knowing what his friends would have wanted, Morris took Nathan under his wing, treating the boy as a son and giving his own son, Hugh, a brother of a sort.

Together these two boys trained, under Morris's tutelage, in the ways of hunting vampires. As they matured, Morris had to admit that Nathan was the better, more skilled of the two hunters. So, when it came time to pass off the prized whip, Morris gave it to Nathan. This angered his own son as Hugh viewed it as a birthright to claim the powerful whip (shades of the Vampire Killer, of course), and it left Hugh resenting Nathan.

Ten years after Dracula was defeated, one of his lieutenants, Carmilla, performed the dark rituals to resurrect Dracula. Morris, through his connections, caught wind of this evil scheme and, backed by Nathan and Hugh, charged to the castle to stop the ritual before it could bring back the Prince of Darkness. Unfortunately the heroes arrived at Carmilla's castle (Castle Karnstein?) too late to stop the resurrection. Dracula was back, and he was pissed.

Sensing weakness in the elder Baldwin, Dracula easily captured the hero while sending his two apprentices tumbling into the catacombs below where, he assumed, they would surely die. Then Dracula and Carmilla set about the final ritual where He would feed on the life force of Morris and regain his full strength once more. The ceremony, however, took time to build, and that was time enough for Nathan to fight his way through the castle, eventually making it back to the keep at the center where he could face off against Dracula, much to the master vampire's surprise. This led to a fierce battle between demon and hero. Nathan proved himself to be every bit the hero Morris had expected, leaving Dracula defeated and sent, once more back to his grave.

Master saved, Nathan and Hugh carried their father-figure out of the castle, safe in the knowledge that, for at least a time, Dracula was defeated and the areas around his evil realm would once more be safe to grow and prosper.

As noted, the main story of Circle of the Moon is set in 1830, but it alludes to an adventure set ten years before between Morris and Dracula. This parallels a late hinted at adventure, the sealing of Dracula in an eclipse circa 1999 AD, another tale left untold. It would be nice to see Morris fighting vampires in his prime, but that adventure is unlikely to ever get made (at least by Konami).

Some have observed that Morris's first name is the same as the last name as other heroes in the series, John and Johnathan Morris, both of whom derive their name from one of the heroes in Bram Stoker's Dracula, Quincey Morris. It's entirely possible that Morris was meant to be an ancestor of the clan, that his name was inverted in translation (either internally at Konami of Japan, or after) and never corrected. In Asia, many cultures put their surname first, instead of last as we do in the West, which could mean his name, Morris Baldwin, was meant to be Westernized as Baldwin Morris and might further cement the history of that clan.