Although the Castlevania series often pulls its monsters from a few of likely sources -- ancient Greek and Roman mythology (such as Medusa, or Judeo-Christian text, like Adrammelech, along with, of course, classic horror cinema -- the series has pulled from other mythological sources upon occasion. One such creature, the Dullahan, appeared fairly early in the series's run (Castlevania Dracula X: Rondo of Blood, to be exact) and has stuck around ever since.

The Dullahan (also called the Durahan, Dullaghan, or Gan Ceann, meaning headless) is an undead warrior from Irish mythology, a creature attributed to the fairies (as many other Celtic monster often were). The monster, a headless warrior who carried his own head in his arm, would ride around the countryside, collecting the souls of victims, pulling them from a living body by calling out the person's name. With a whip made from a human spine, and a wagon made of bones, this terror reaped souls wherever it traveled, making it a truly fearsome creature.

That said, most of the mythology of the creature didn't make its way into the Castlevania series (especially in his later appearances). Although the Dullahan was not classically depicted as wearing armor, when the creature shows up in the video game series (and, it's worth noting, in many other Japanese video games as well), he's often depicted as wearing full plate armor while carrying a giant lance. In fact, about the only thing that ties this version of Dullahan to his source material is that he'll travel around with his own severed head. 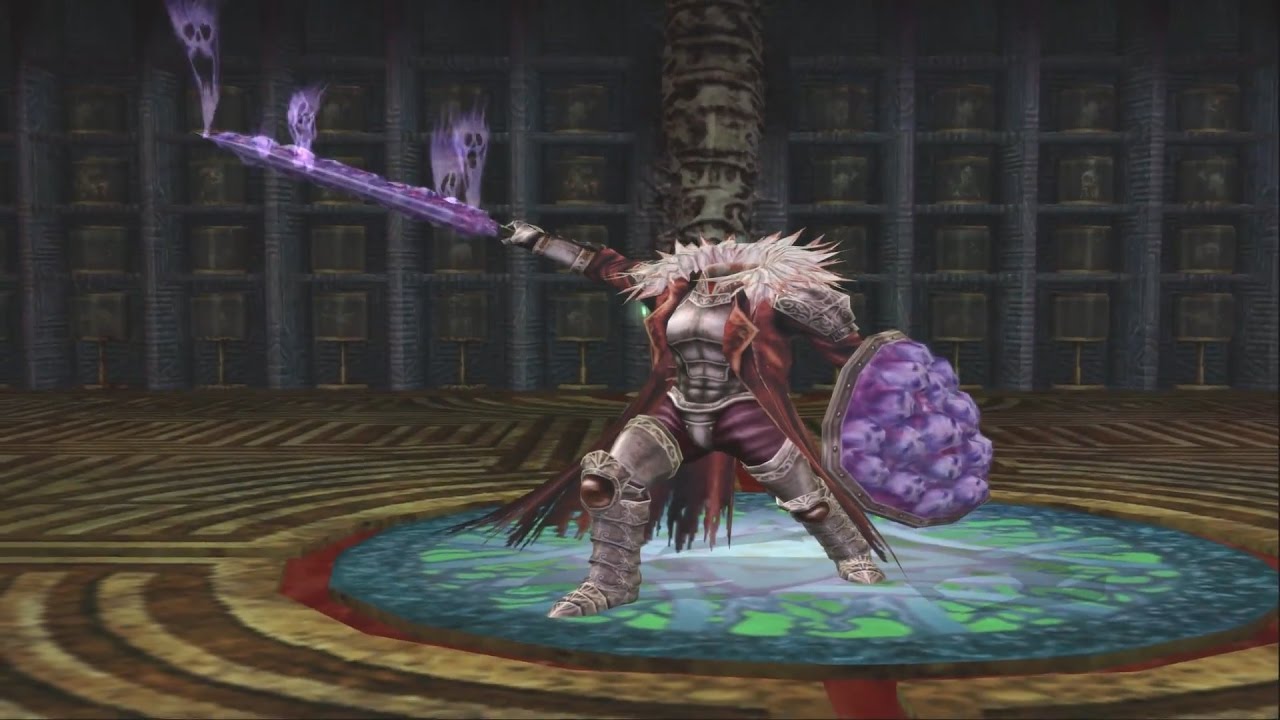 In the creature's early appearances, the Dullahan was just a minor enemy, a ragged undead thing that carried its own head (or skull) around in its arm while attacking with a rapier. It would patrol its area and then attack with a vicious lunging strike which, if the enemy was positioned near a pit, could easily send the hero hurtling into the depths of a pit. This version first appeared in Castlevania III: Dracula's Curse, and then was reused (with updated graphics) for not only Super Castlevania IV but also Castlevania: Symphony of the Night and, much later, Castlevania: Order of Ecclesia, although the later games also gave him the ability to charge up a lightning bolt that that could hurl at the heroes.

Dullahan became a proper boss in Castlevania Dracula X: Rondo of Blood. This is where he received his lance along with his plate armor. In this version, the monster would have three attacks: he could lunge at the player with his lance, he could raise it up above his head and then leap across the screen to plunge the lance into the ground, and he could raise it up and then plunge it down in front of him causing a wave of ice spears to rise from the ground. Once the beast was below half health he would bring out two new attacks, both using his head: the head could be charged with flames and then it would fly at where the hero was at before flying back to the armored body, or it could fly up in the air and summon a rain of stones to fall down on the stage. The boss isn't hard when you can recognize his tells, but he can easily destroy you if you get greedy with the number of attacks you layer on.

This same basic fight is reused, naturally enough, in the Castlevania: The Dracula X Chronicles version of the fight, although with a couple of minor differences. First, the head can make two passes at the hero when it's charged up. And second, the boss will launch a desperation attack as it dies, sending up its head to throw five fireballs, in an arc, at the ground. Otherwise, the same rules apply for this version of the battle. Also of note, this same fight also appears in the SNES "remake" of the game, although the boss feels slower, with longer pauses as he telegraphs his moves. He does have the desperation attack, though, so be wary of that.

A different minor enemy goes by the name of Dullahan in Castlevania: Circle of the Moon. This one rides the front half of an undead horse, charging back and forth across the screen, patrolling his area. This version of the monster would lead to the Dead Warriors in later games that would also ride a ghastly horse, patrolling set sections of an area.

Another enemy version of the beast would then appear in Castlevania: Lament of Innocence. Here the hulking, headless around would appear with a greatsword and a giant shield (with a face on it), and would attack the player either by swinging the sword or having the shield breathe fire at the hero. It's a big enemy, that can soak some decent damage, but as it wasn't a boss it wasn't as worrisome to deal with. 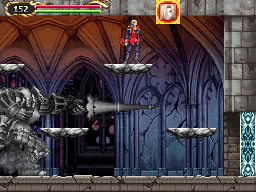 No, that would come in the next 3D game, Castlevania: Curse of Darkness, when the hulking armor with sword and shield (now decorated with a melange of ghostly souls) appeared as a boss. Dullahan primarily attacks with his sword in his first phase, performing a couple of different sword combos (slashes, whirls, and stabs) at the hero, generally after a short pause each time (so the hero can lay on some damage). He could also string in jumps into the air to perform ground pounds (that send shock waves along the ground), or he could pause, charge up his sword, and create a much more impressive magical wave attack that would radiate from his body like a tower of souls. And he could charge up his sword and perform a spinning beam attack, shooting a ray out from the tip of his sword while pirouetting in place. Meanwhile, his second phase seems to add on only a shield bash her could perform as well, dashing at the hero to deal damage, making this one of the less impressive second forms of any boss in the game.

Dullahan returns as a boss in Castlevania: Portrait of Ruin where, mechanically, he's not that different from his appearance in Dracula X. He can lunge forward with his lance, or he can pause and then do a leap across a portion of the screen, pounding his lance into the ground. The key difference comes from the head, which flies around the room; when Dullahan summon the head to his body, he'll place it atop his armor whereupon it will spew five souls out towards where the player is standing (so move back and forth to avoid them). Then it will throw the head out, and little souls will spray out in a pattern; just move a few steps back to a consistent safe spot in the pattern and you can avoid damage every time. He's the first boss of the game, an easy to dispose of, so this version of Dullahan should not prove to be a stopping point for your adventure.

A version of Dullahan not dissimilar to the Portrait of Ruin boss shows up in Castlevania: Harmony of Despair, although this time as a regular (if hulking) enemy. The one key note here is that instead of his body being his weak point (as in basically every other appearance of the boss) his floating head is the only part of him that can be damaged. And when the boss appears at the end of the first stage of Castlevania: Grimoire of Souls he's in a much bigger, and far more hulking form, although in basic design and function he's similar to how he works in Portrait, so just know your strategies and you'll be good to go.

Boss strategies for the arcade "light gun" game Castlevania: The Arcade are very different from any other title in the series. Here, Dullahan appears as the boss of the second stage, the Cathedral, and he's really not that hard to take care of so long as you know his moves. There's no dodging or moving yourself in the game, as it's an "on-rails shooter", so instead you have to recognize his slashing, bash, and leap attacks and swipe at him as he telegraphs them briefly. If you do that you'll stun him out of his attacks and can layer on the damage. Fail, though, and you'll be the one walloped by the hulking armor with his greatsword.

Other Appearances of Dullahan 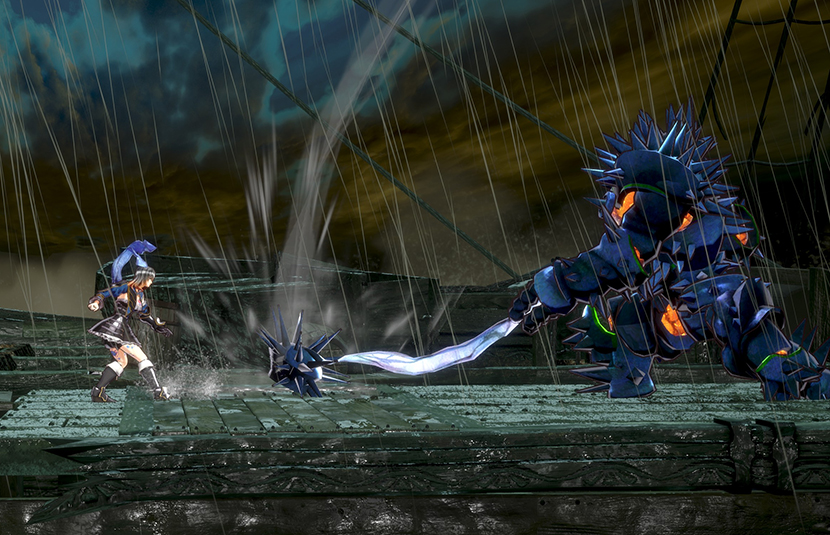 The Dullahan was originally supposed to appear in Castlevania: Order of Shadows, and concept art was released for the monster. However, the boss never appeared in the final game, making just another idea for Castlevania's cutting room floor.

In the Bloodstained series a similar creature exists: the Dullahammer. This enemy is depicted as a hulking beast without a head, and will often attack with one specific weapon -- sometimes a hammer, ball-and-chain, or other melee weapon. He even appeared as a boss in the Bloodstained: Ritual of the Night Classic Mode, in an even bigger form, to terrorize the player at the end of the Chapel Tower. It's also worth noting that the dullahammer head is its own enemy, a little monster that will appear in swarms and fly across the screen, taking the place of the similarly used Medusa Heads from the main Castlevania series.

And, of course, the Dullahan has appeared in a ton of other Japanese media (Monster Musume, Overlord, Konosuba, to name only a few, along with countless video games) such that the monster is something of a mainstay now.