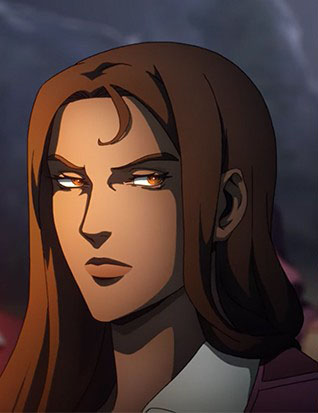 When the Castlevania anime debuted, the one complaint many fans had was that it was lacking a character very specific to Castlevania III: Dracula's Curse: Grant DaNasty. As the series was (loosely) based on that game (at least for its first two seasons), fans wondered why Grant was the only character not included in the series. The three other heroes -- Trevor, Sypha, Alucard -- were there, but not poor Grant. What happened to the guy?

Well, whether intentional or not (and the series producers swear it wasn't intended), the series did eventually get a kind of Grant DaNasty analogue: Greta of Danesti. A warrioress, and village leader in the town of Danesti, Greta becomes the fourth hero of the group in the final season of the anime. And as much as the producers swear she's not meant to be Grant, the parallels are pretty obvious. She wears green, she fights with a swashbuckling style, and she is an equal warrior to the other three members of the team. Even if she's not meant to be Grant, she's the closest the show ever got to having that hero represented.

Whatever you may think about her origins there's no denying that Greta is a great addition to the series. She's a solid hero, and her attitude towards Alucard (respect tinged with anger that he spent so long not helping the people around him, all of which grows into affection over time) gives her depth of character and a strong arc on the show. Whether or not she ever appears in the larger Netflix Castlevania run, her inclusion in season four helped to give the team, and the series, much need balance. 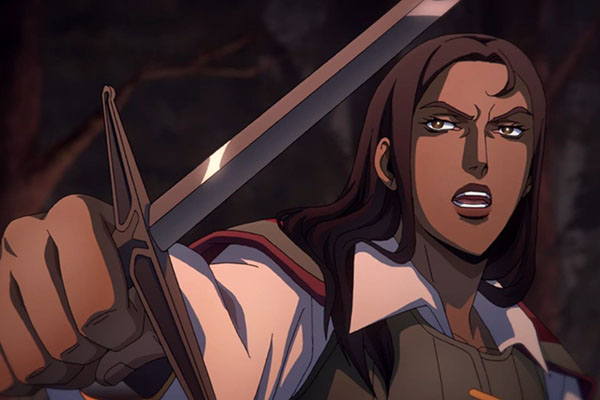 As the appointed leader, and the best warrior, in the town of Danesti, the job of defending the town from the growing armies of Night Creatures fell on Greta. She had to stay at the town, night after night, fighting off the fiends of Hell as she slowly watched her people get attacked and carried off (presumably to be eaten... or worse). What she needed was help, so she sent a rider off to the ruins of Castle Dracula, which sat above the ruins of the Belmont keep, to ask for assistance from the one hero in the region: Alucard.

Although he'd spent the previous six weeks trying to chase people away from the ruins, even going so far as erecting pikes with bodies impaled on them as visual warnings, Alucard realized he couldn't ignore a plea for help. When the rider showed up at the castle, dead but still slumped over his horse with a note pinned to his body, Alucard went charging off to the town to help the people of Danesti. He came just in time to fight off one horde of the damned, but he quickly realized that Danesti was too hard to defend, with walls that would never survive a prolonged assault. Against his better judgment Alucard agreed to take the people of Danesti back to the castle where the thick walls, and defenses, would protect them.

What Alucard and Greta didn't realize was this whole operation, from luring Alucard in to having him take the people back to his fortress, was all part of a larger plan by the forces of Death. Under the guise of resurrecting Dracula, Death needed all those people to be near the place where Dracula had died. There they would all die and their souls would be committed to an incantation that would open a gate to Hell and suck Dracula, and his wife Lisa, back into the world of the living, shoving both their souls into a single body, a rebis, which would twist and tear at their souls, driving the undead thing crazy.

As the Night Creatures attacked the castle, tearing at the fortress's defenses, Death's chosen magician, Saint Germain, snuck into the high ramparts of the castle to the room where Dracula had died. He erected a protective barrier and began his work. As the townspeople of Danesti died, despite the best efforts of Alucard and Greta, their souls were pulled into the spell, working the magic to open the portal.

Alucard and Greta battled fiercely but they could feel the tide of battle turning. Thankfully for them Trevor and Sypha soon arrived, traveling on a magical transport spell. They'd been chasing a vampire, Varney (who, as they would soon learn, was actually Death in disguise), but when they saw their friend Alucard and the battle he was engaged in, they changed their target and came to help. With the four heroes united they were easily able to beat back the minions of Hell and save those townspeople still alive. Greta then went to work to aid her people while the other heroes went up into the castle to stop Varney and the dark magics at play.

Due to the actions of those heroes the plan to resurrect Dracula was thwarted and the rebis was destroyed. Varney then revealed himself to be Death and, in a one-on-one fight Trevor was forced to battle the undead super-vampire while the other heroes were stuck on the sidelines, helpless to assist. It seemed that Trevor wouldn't be able to defeat Death but he gave the fight his all, pulling out every trick and willing sacrificing all his power to the fight. It seemed, in the last strike, that both Death and Trevor were defeated at once, a blast of magic wiping them both out, leaving the other heroes forlorn over the death of their friend.

The next day, Alucard and Greta started the process of rebuilding the castle. With Greta's encouragement Alucard agreed to let the townspeople stay on the grounds, building a new town in and around the ruins. Sypha initially elects to leave, saddened at the loss of her lover, Trevor, simply wishing to go find he people, the Speakers, and reunite with them as she grieved. However, as she prepared to leave up rode Trevor. Apparently, in the blast he'd been transported away (thanks to a dying Saint Germain who had a change of heart in his last moments), saving the hero even as the evil super-vampire died. It had taken him time to ride back to the castle, but he made it, bruised and lightly injured from the whole affair.

Reunited, all four planned for the future of the castle and the town that would come.

As noted, Greta likely isn't meant to be a one-to-one analogue for Grant. She does, however, fit nicely into the space left by that hero, taking up his style while being just different enough to flesh out the story in her own way.