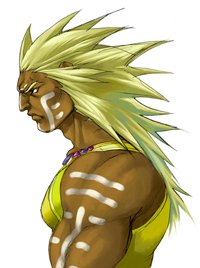 There is a tendency in fantasy storylines to give a hero a villain who matches them in strength and special powers, such as Ant-Man and Yellow Jacket or Superman and Zod. The villains serves as a dark reflection of a the hero, a path the hero could have taken if they had just made a simple choice to stray from righteousness. The Castlevania series has it's own share of mirrored relationships, such as Soma Cruz and Graham Jones, Nathan Graves and Hugh Baldwin, or, in the case of Castlevania: Legacy of Darkness, Cornell and Ortega.

Cornell, being a werewolf, already has one foot in the darkness. And yet Legacy provides the lycnathrope hero with a rival, one who explored his own darkness and, instead of rejecting it for the light, dived deeper and deeper until he eventually became a willing subject of Dracula's darkness. You can't stray much farther from the light than that, really.

Growing up in the same village of man-beasts (lycanthropes in the common parlance), Ortega and Cornell were best friends since childhood. Playing and training together, the two brought out the best in each other, pushing themselves to each prove they could keep up with one another. However, in most cases Cornell usually proved to be the victor. Over time, this constant losing streak wore on Ortega, causing a tide of jealous to well up within him. When Cornell went off to train by himself, Ortega went in search of the kinds of power he could use to gain the uppoer hand over his supposed friend.

This search led him to Dracula's castle. There, the minions of the Dark Lord promised Ortega all of the power he could ever dream of, but first he had to aid them. They needed Cornell, and the power within the werewolf, and it was Ortega's job to lure the heroic werewolf to Dracula's castle by whatever means were necessary. So Ortega went back to his home village, set it ablaze, and kidnapped Cornell's adopted sister, Ada.

Seeing his village aflame and finding his sister kidnapped, Cornell understandably chased after the man he thought a friend. This brought Cornell to the castle, just as Ortega planned. Within the demonic terrain, Cornell faced many dangers, not the least of which was Ortega. Three times the one-time-friends met up, and each time Ortega lured Cornell further into the trap. In their first encounter outside the castle proper, Ortega boasted of what he'd done and his hand in Dracula's plans. Cornell, shocked at this turn, watches as Ortega flees towards the castle, leaving the werewolf to follow.

Deeper within, Ortega once again confronts Cornell. This time, Cornell is lured right into a trap, locked into a huge cage with a hulk werebeast. Cornell is forced to fight for his life while Ortega watched. However, the beast was unable to kill Cornell and the werewolf broke free only to find that Ortega had already legged it deeper into the castle.

Their final confrontation was near the top of the castle. In a battleground on the open parapets, Ortega threw down his gauntlet, unleashing all his hate an jealousy upon Cornell. He transformed, using the powers of darkness to become a hulk were-chimera before attacking Cornell. This final confrontation between the two one-time-friends was bloody, but it ended not with Cornell's death and Ortega finally winning, but with the rival's last, brutal defeat. Dying at the feet of his friend, Ortega apologizes for his actions, saying that attacking his town was too much. He let Cornell know where Ada was hidden in the castle before throwing himself off the tower, exploding in the air as his power overloaded. 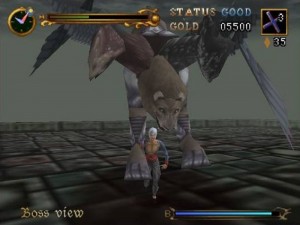 Ortega only appears in Cornell's plotline, which makes sense since Cornell's plotline technically happens before any of the other heroes in the game (or it's semi-sequel, Castlevania 64. He is the only villain in the N64 games to not cameo in the other plotlines from those games.

Once Ortega transforms into a chimera (after a lengthy cutscene), Cornell will need to dodge around the arena quickly. The chimera will charge, leap, and pounce at Cornell in an attempt to knock him down. Any time Cornell is then in range, the beast will claw at Cornell with its forepaws. Watch out as one of the heads will spray out an acid fog early in the round. Just stay back and waiti it out. The chimera can also leap into the air and fly up, shooting out expanding rings of force for the hero to avoid. Attacking the various heads enough times will damage them, stopping their attacks.

Eventually enough damage will be laid in that the lion head will breathe out a gout of flames that will linger on the ground. Keep back, and mind your space so as not to get pinned. On the whole, though, the battle is pretty easy so long as you dodge enough and don't let the beast get in too close.