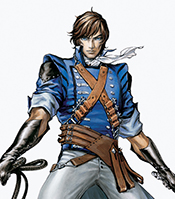 During the span of the Castlevania series leading up to Dracula X there had been a number of Belmonts: Christopher, Simon, and Trevor. Among them, Simon was often credited as being the most powerful vampire hunter (aided in no small part by his popularity among fans). However, with a set timeline in place the series would eventually have to move on from just those three Belmont. Thus came Richter Belmont and his adventures set 100 years after the era of Simon.

Certainly, though, Richter has secured quite a legacy in the Castlevania series. The fact that he featured in one of the most popular Castlevania games of all time (Symphony) and was one of the two heroes (with Maria) in what is often credited as the best old-school game in the series (Rondo of Blood) didn't hurt at all. In fact, his exclusion from many of the last games in the series -- no appearance in Castlevania: Judgment and no reference in the Lords of Shadow series -- seems partiularly shocking. After Simon and Alucard, Richter is one of the most famous heroes in the series.

Still, with four games where he's featured as a playable character (usually as a hidden mode) plus two remakes of his most famous adventure, Richter's legacy is safe. 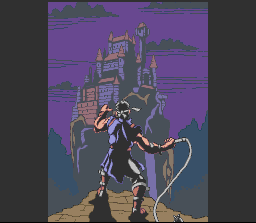 100 years after Dracula's final defeat at the hands of Simon Belmont (give or take), Dracula was resurrected once again. Aided by the dark priest Shaft, Dracula demanded women for a blood sacrifice to give him power. Sending their minions out, four girls were taken from the local village: Annette (Richter's fiancee), Iris, Terra, and Maria Renard. These girls were brought to Castle Dracula and imprisoned there to await their fates.

However, Richter Belmont, sworn protector of the land and vampire hunter, found out about Dracula's actions. Swearing to rescue his kidnaped love as well as the other girls, Richter ventured out into the land to gain access to the castle and defeat the dark lord.

Along the way, Richter freed Maria, a local girl and vampire hunter in her own right. Rumored to be distantly related to the Belmont clan, the girl showed great power. Richter took her along on his quest, and the two aided each other in combat, exploring the ever shifting castle.

Eventually, having freed the other girls, Annette included, Richter and Maria reached Dracula's throne room. Through a vicious battle, Richter bested the dark lord and rid the land of his evil... or so he thought.

Officially, Rondo of Blood is the 1792 AD entry on the Castlevania timeline. However, it did have two remakes which each adjusted the continuity slightly. Firstly there was Castlevania: Dracula X (commonly referred to as Dracula XX or simply DXX), a SNES remake/reimagining of the game. While most of the story was the same (omitting two of the girls and removing Maria as a playable character), the game did tweak one detail: Maria Renard became Annette's sister (which is why Annette is often referred to as "Annette Renard"). This wasn't included in the original game, but became official continuity when Maria called Annette "my big sister" in Symphony of the Night.

Eventually continuity was adjusted by a later remake, Castlevania: the Dracula X Chronicles. In that game it's explained that Maria was eventually adopted into the Belmont clan after the events of the game. In that case, Annette would be her sister-in-law (if Richter was her adopted brother and Richter and Annette got married), so Annette would fill the role of "big sister" at that point. It's worth noting that the translation to English from the original Japanese can support Anette being a sister-in-law and a big sister by graces of language differences.

Five years after Dracula's defeat at the hands of Richter Belmont (which is glimpsed again at the start of this game), evil fell over the land once again. Awoken from his slumber, Alucard (one of the heroes of Castlevania III and son of Dracula) ventured out into the countryside only to see Dracula's castle once again atop the Borgo Pass. Exploring in, Alucard is confronted by a mystery: the local protector, Richter Belmont, went missing right around the time Dracula's castle appeared. Getting this news from a vampire huntress (and sister of Richter Belmont), Maria Renard, Alucard swears to search the castle and find out what happened to Richter.

It doesn't take long, though, for Alucard to be confronted by distressing news: Richter Belmont went mad and evil and proclaimed himself lord of the castle. Alucard feared the worst for the vampire hunter, but Maria soothed him, telling him that Richter wouldn't truly go evil so obviously something had to have happened. With her aid, Alucard is able to see the dark magic behind Richter actions -- the vampire hunter was being controlled by the dark priest, Shaft. Fighting the secretly hidden Shaft, Alucard freed the Belmont. With Maria's aid, Richter fled the castle to recover, leaving Alucard to find Dracula and end the dark lord's reign of terror once again. Together, Richter and Maria watch from afar as the castle crumbles. Alucard says his goodbyes, saying that the dark magic within him had to be put to sleep once again. Richter then told Maria to go after the vampire for he could see she had feelings for Alucard.

It's worth pointing out that while Richter's main part in the adventure ends halfway into the game (when he leaves the castle with Maria), he actually had his own playable mode. Although non-continuity, players could still take the vampire hunter through both sides of the castle (regular and inverted). This mode was incredibly difficult, though -- Richter, while supremely overpowered offensively, could take about as much damage as a wet tissue. Finishing the game in "Richter Mode", then, was a test for experienced gamers.

Richter Mode made a reappearance in the Japanese Saturn remake, Nocturne in the Moonlight. There, though, the players could also activate an alternate costume for Richter, dressing him up in his evil garb. The graphics for this version, though, were not very good so most players chose to avoid it.

And, of course, Richter showed up as a playable character in the later remake of Symphony packaged as a bonus feature in the Dracula X Chronicles. As before, he was strong but weak, since this version of the game didn't feature any major changes for the vampire hunter.

Also of note is that fact that Symphony received an audio drama sequel, Castlevania: Nocturne of Recollection. That that audio play, Richter aids Mari and Alucard in dealing with a pair of self-proclaimed vampire hunters -- hunters, to note, who are after Alucard. The evil in the land is revealed to be a demon, Magnus, and with Richter's aid, Alucard is able to kill the demon and clear his name. That said, this adventure a Japanese-only radio release, one that was never brought, in official form, to western shores. While it may hold a place in official continuity, we at the Inverted Dungeon don't consider it official canon, mostly because we can't understand it (as we don't speak Japanese).

Although Symphony of the Night was the first official sequel to Rondo of Blood, originally a different game in the series was intended to fill that slot. Called Castlevania: The Bloodletting, this game would have seen Richter and Maria team up on a new adventure against the forces of darkness. Both characters were redesigned for the new game, featuring new sprites in a slightly different style from Rondo of Blood. However, the intended platform for the game, the Sega Genesis 32X add-on, was quickly scrubbed from existence due to poor sales, and The Bloodletting was quietly cancelled.

That wasn't the end of Richter's sprites from this failed game, though -- it's thought that this new art was re-purposed for Zombie Trevor's sprites in Symphony of the Night. Fans noticed that the sprites seem to line up pretty well between the two characters, lending some credence to this theory. Sadly, the character name and bio given to Richter's new look by the Inverted Dungeon -- we took to calling him "Roberto" -- name never seemed to stick with the rest of the fan community (unlike with the horrible things we've done to Hanz Belmont, aka the Rival).

Richter makes a non-continuity appearance in Harmony of Despair as a downloadable character (alongside young Maria, of course). Of course, this whole game is a flight-of-fancy, non-continuity adventure, so nothing that happened in the game actually had any effect on the greater continuity.

Although Richter initially seems like just another basic Belmont -- a step down, even, from Simon in his Super Castlevania IV form) -- that initial appearance is deceiving. While it's true that Richter cannot whip in multiple directions (unlike later-Simon or John Morris), he does retain the the ability to control his jumps, shifting in air as well as jumping onto and off of stairs. He also gained a backflip in his first game, giving him a bit more maneuverability.

What's special about Richter is his aility to overpower his main attacks, called "item crashes". With these attacks he can throw out hundreds (thousands) of daggers, spinning vortexes of crosses, and storms of holy water. Even without an item, he can still "crash" his whip, creating a flame whip not unlike John Morris's final whip upgrade. Amusingly, he can even attempt to crash keys when he collects them, but this just makes him confused, causing little question marks to appear above his head.

Once Richter moved on to Symphony of the Night he picked up a whole fleet of tricks, gaining a variety of martial arts moves, from multi-kicks to air dashes, making him a formiddable foe. Of course, insitially Richter has to be fought (or, at least, avoided when Shaft is actually fought), so these special powers of his can prove deadly to the unprepared. Thankfully, once you earn the right to play as Richter, you can pwerform all his nifty skills and attacks -- masting these abilities will be necessary for anyone hoping to complete Richter's quest in the game.

Richter appears as both a boss and a bonus unlockable character in Portrait of Ruin, and there he plays much like his Rondo of Blood version. As a boss, Richter is an incredibly tough fight. He has full access to his complete compliment of sub-weapons, including the Grand Cross item crash, and he weild's a fully powered Vampire Killer which can kill Johnathan in just four hits. Again, though, the player gets the same access to his skills and powers (although he lacks the martial arts available in Symphony) meaning the players can have fun using this over-powered vampire hunter.

Finally, Richter plays in a kind of hybrid-form of his various appearances for his role in Harmony of Despair. While he still lacks item crashes, he can perform Dual Crush attacks with other players, giving him a variant of these traditional attacks. He's also able to use his martial arts attacks again, combined with a decent selection of sub-weapons (although not nearly as many as Johnathan Morris can use). He's a fast, powerful fighter who works as a good fit for more skilled players.