Events as Hinted in Other Games

Prior to the events of Castlevania Legends, Matthias Cronqvist ran around Romania (and, really, most of eastern Europe) doing very evil things... the details of which aren't well known and are mostly open to speculation. What is known is that, at some point (after he took the mantle of "Vlad Dracula", although historically this is sketchy at best) Dracula met a woman whom he fell in love with, Lisa. She was a healer in a local town, and the two struck up a romance. Lisa reminded Matthias of his first wife, Elisabetha, and he thought she might actually be his first love reborn.

Dracula and Lisa had a child, Adrian Fahrenheit Tepes (a name we feel falls somewhere closer towards "ridiculous" than "sane and normal for a child; thankfully he chose to call himself "Alucard"), and, probably, there was a time where the three of them were happy together. Certainly (as suggested in Castlevania: Symphony of the Night) Alucard loved his mother, so there had to be some period of happiness in there for that familial bond to form and grow.

Whatever happened specifically, eventually the villagers of the town decided to burn Lisa at the stake for being a witch, her healing powers being too "witchy" for the inbred yokels as well as the Church. Probably the fact that she was married to a vampire, one called the "Prince of Darkness", didn't help help her case either. This, of course, made Dracula very angry. He went even more evil than before (which feels like a very nuanced scale to begin with) and elected to wage war on all of humanity. Alucard, upon seeing his father's fury (which, since he was the son of an evil vampire, he should have been prepared for), elected to fight against his father instead of with him.

Needless to say, there have been better father-son relationships in literature and the arts. It makes the relationship between Luke Skywalker and Darth Vader seem positively amicable (and if you're interested in Star Wars, we'll point you to the archive on the topic over on Asteroid G). 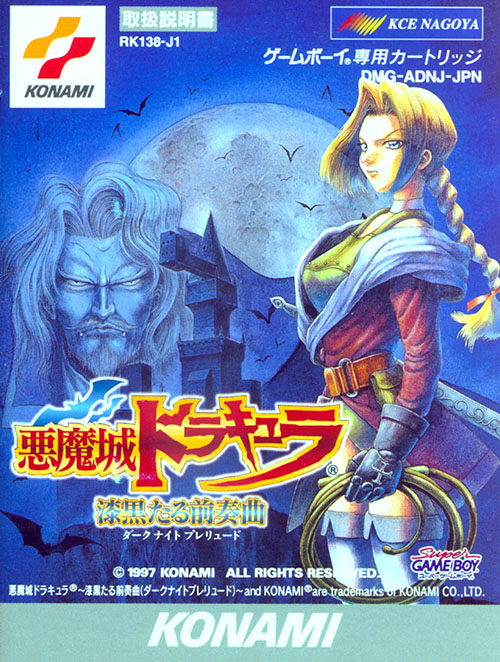 As Castlevania: Legends picks up, almost 400 years since passed since Leon Belmont defeated Walter Bernhard and established the Belmont clan as the go-to heroes for vampire slaying. The vampire Dracula had risen to power (potentially now Matthias in disguise), and while known as an evil tyrant in life, he became only worse as one of the undead, rightly earning the title of the "Prince of Darkness".

Thankfully, a girl with her own power rose to the occasion. Sonia, of the Belmont clan and wielder of the clan's magic whip, the Vampire Killer, stepped forward to do her best against Dracula and his newly raised army of the undead. Although she was but one hero, and her clan hadn't faced a threat of this magnitude in several centuries (at least, not that we know of), she still knew what her duty was to Romania, humanity, and the world.

But Sonia was not entirely alone in her quest. At the castle she encountered Alucard, a man she knew from before her quest to destroy Dracula (Alucard, the sly dog, did love the ladies, especially the blonds). When the two met in the castle, Alucard elected to test Sonia to make sure she had the power to defeat Dracula. When she showed that her skill and strength was greater than even Alucard's, he let the girl through to deeper in the castle. It was a tough and perilous journey, but one that Sonia had been training for her whole life and she felt ready to take on the evil that lay ahead.

The battle itself was difficult, with the young woman taking on a centuries-old evil for the fate of humanity. But then she had the power of her clan behind her, and all the skill those centuries had bestowed upon her family. Dracula was soon defeated by our heroine, sent, for the first time, to a grave he would come out of a surprising number of times in the future. Sadly the townspeople weren't so pleased with Sonia. While the countryside was (temporarily) safe from vampires, Sonia had proven too powerful, too strong in her family's magic. Fearing her, the townspeople exiled the Belmonts from the land, including the child Sonia soon realized she was carrying inside her.

Sonia did vow, though, that so long as evil is in the land, the Belmonts would stand against it. She left the country but she knew, deep down, her family would have more evil to fight in the coming years (and beyond).

Firstly, it is worth noting that this game is no longer in the formal Castlevania continuity. It is, officially, the only game to have absolutely no place in continuity as even other games first removed from the timeline have been quietly re-added eventually. This is, probably, due to the major plot errors this game has when you take Castlevania: Lament of Innocence into account.

As mentioned in the Lament of Innocence article, it is implied that the vampire Matthias eventually becomes the Dracula we all know from the series. Legends, though, posits the vampire as recently turned (with just enough time afterward to sire a half-vampire son). Clearly, without some liberal interpretations of history and the greater Castlevania story, Dracula couldn't both be a 300 year old vampire and a just turned vampire (let alone also a human waging war against the Turks, as actual history so rudely dictates). We at the Inverted Dungeon could, of course, come up with an interpretation that could work, but we're saving it for our fanfics.

Taking into account the fact that Dracula would have had to be born (1431 AD, to be exact), get old enough that Matthias could then steal his identity convincingly, marry a woman, and have a kid, doing all that before 1450 AD stretches all credulity. Removing this title, though, at least clears that part up. While the timeline for Dracula's own life is still suspect, if Matthias simply kills the man and takes over his name (renaming his whole clan in the process), that at least works a little bit better. There are still historical issues, but the continuity isn't as hard to massage as it is when Legends is also in the pool.

With this game removed from continuity, Sonia is no longer the originator of the clan (the implication from the end of this game). The game ends with Sonia having a child, which fans are left to assume is Trevor Belmont (the hero of the next game, chronologically, in the series, Castlevania III: Dracula's Curse); without Sonia, Trevor's mother was just some unnamed woman. Additionally, this game's removal also means there's no confusion as to if Alucard is also Trevor's father (again, the implied relationship between Alucard and Sonia made this fact ambiguous at best). Now, of course, with this game's removal, Trevor is just another Belmont with absolutely nothing special about him (except for, you know, that pesky whip and a penchant for leather kilts).

Launched in July 2017, Netflix began airing a Castlevania animated series. While much of the series follows Trevor Belmont around, the first episode deals with Dracula -- namely, his falling in love with Lisa and then, later, her death at the hands of the Church. Alucard makes a brief appearance in this early section, and then we are quickly shoved on towards Trevor. No mention is ever made of Sonia (because of course not, not with her place in current continuity) and, in fact, Trevor only ever mentions his father, the previous heir to the Belmont legacy.

It's also worth noting that in this version of events, Dracula has only just turned bad after a a couple of decades of relative peace (in which time he and Lisa had Alucard). Based on that, there would be no way to even bring Sonia in to this series without drastically changing her story greatly. Thus, anyone hoping for a reinstatement of Sonia to proper status would have to look elsewhere, sadly.