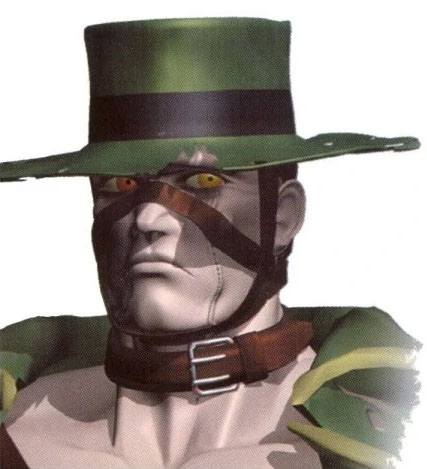 The development of Castlevania for the Nintendo 64 was long and arduous. The game came out after the phenomenal Castlevania: Symphony of the Night, and while that PlayStation game was well received by critics, it didn't set the world on fire (reportedly selling less than the magic number of One Million units). As such, Konami went in multiple directions to find a new game to pick up the Castlevania mantle and craft the "next big thing".

One of their solutions was to setup a new team focused on the Nintendo 64 hardware. Their job was to transition Castlevania into the third dimension and do it with style! The team came up with an ambitious adventure featuring four characters each with their own path through the castle, all of which would converge on Dracula's final keep where the last battle would be fought. Those four characters were a Belmont-like hero (who eventually became Reinhardt Schneider), a witch (who would evolve into Carrie Fernandez), a werewolf (Cornell, cut from the game but eventually included in the director's cut, Legacy of Darkness), and a shotgun and chainsaw wielding monster, Coller.

If that character sounds at all familiar its not because he was playable in the final game. Instead his game play mechanics were re-purposed into Henry Oldrey in Legacy of Darkness. Meanwhile, his basic model -- that of Frankenstein's Monster but with a chainsaw -- became the Gardener in Castlevania 64, a seemingly immortal mid-boss for the Villa. Coller himself, and whatever plans were made for him, were ditched in development (but not before the character had been announced in the first materials for the game, including in Nintendo Power).

So while Coller never truly got his time to shine, we at the Inverted Dungeon love to give canceled characters their due. As such, enjoy this bio for Coller that we completely made up: 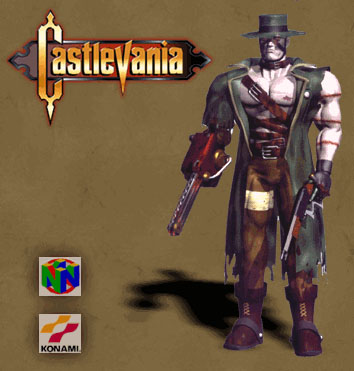 Although the connection between Dracula and the mad scientist Dr. Frankenstein isn't well known, the two did meet on more than one occasion. That's what happens when one of the two is a monster who lives in a horrible castle surrounded by the dead and the other is Dracula. Seeing a like-minded spirit in that of the doctor, Dracula invited the scientist to take up residence on the outskirts of the Borgo Pass. There he could set up shop and continue his work into life, death, and cheating the one away from the other.

When the mad doctor died (as history records it, due to the angry application of torches and pitchforks), his lab was left empty, just waiting for someone to come along. As the lab was on Dracula's grounds, the vampire lord took it upon himself to loot the lab of all the good and monstrous creations he could find. That's how Frankenstein's Monster ended up living and working in Castle Dracula. However, that creature (commonly called "Frankie") wasn't the only lab-created beast Dracula pillaged away. Another creation, a general upgrade in all respects, was also found. Named "Coller2", this was the final beast the doctor made before he died. And she was also a follow up to a beast the doctor considered a much less successful endeavor.

You see, unlike Frankie, the first Coller had something approximating a proper soul and with that also came a conscience. Coller saw the evil ways the mad doctor had twisted himself up and could stand it. The doctor got tired of being high-roaded by his own creation and put the beast to sleep medically. Coller's reprieve, though, was short lived as the dose the doctor gave him wasn't powerful enough to permanently knock him out. Eventually Coller awoke again, escaped, and fled to the nearby town, telling stories of what the doctor was up to. The villagers banded together and stormed the lab, doing what scared and crazed villagers do. Coller fled, his father dead but the evil he had wrought finished. Or so Coller thought.

Of course, once he learned that Dracula had gotten his hands not only on Frankie but also the more powerful and more dangerous, Coller2, the first version picked up his weapons and went back to the Borgo Pass. His goal was simple: to kill his siblings, especially his sister, and stop Dracula's evil once and for all. He battled through many dangers, meeting other heroes along the way who were on their own quest to kill Dracula. It all lead to a final confrontation, between Coller and his sister, at the top of the Tower of Science.

There, flesh golem fought flesh golem as the two battled furiously back and forth. Despite being the upgraded model, though, Coller2 was no match for her brother and ended up on the scrap heap. As she breathed her last, she begged her brother for forgiveness, asking only that the automaton go to the top of the castle and finish off Dracula's evil. He made that vow, heading off to the top of the keep where he did, indeed, battle the nefarious Prince of Darkness, sending that demon's soul back to the pits of Hell once again.

Obviously, as Coller never showed up in a proper game there's no way to actually play as him. However, we can glean some information from Henry's quest in Legacy and from what we've seen of the other characters and how they play. Coller would have come with two weapons: his primary, a shotgun, which would have had decent range and could have been upgraded, alongside his chainsaw, a powerful but close-range weapon. He would have used these two implements, plus a selection of sub-weapons, to clear out the monsters and defeat Dracula.

As others have noted, Coller, which his shotgun and chainsaw, feels distinctly like a riff on Ash Williams, the hero of the Evil Dead series. Whether that was intention or not is up for debate, but it would have been kind of cool to have an Ash analogue running around in a Castlevania game. It's a pity we never got to play that version of Castlevania 64.