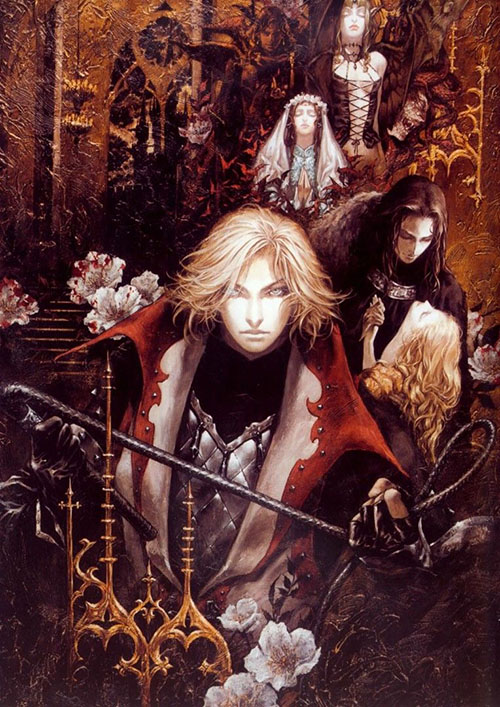 Chronologically, this game comes first in the "main" series (as opposed to the Lords of Shadow reboot continuity) and concerns itself with explaining the rise of the Belmont clan. Leon Belmont, hero of the Crusades (the game conveniently ignores the fact that the West never really won any of the Crusades, at least not for very long) came back home to the woman he loved, Sara Trantoul, with every intent of marrying her and starting their life together now that the wars were over.

Sadly, things didn't go well for Leon and his best laid plans. He arrived home to discover that his woman had been taken by the vampire lord Walter Bernhard. Informed of what happened by his old friend, Matthias Cronqvist, Leon knew he had to accept Walter's "invitation" to come play at the vampire's demon castle. Leon stormed off to Bernhard Castle to defeat the beast and save his beloved before it was too late. In the process he enlisted the aid of an alchemist who lived on the edge of the forests surrounding the castle. This weapon-crafter and magical scientist, Rinaldo Gandolfi, provided aid and information to our hero, but also a dire warning of the potential dangers that awaiting Leon in the castle's halls.

During his exploration of the castle, crossing back and forth through the halls to find the key items he needed to progress further into the demon fortress, Leon did eventually find his beloved. Unfortunately she had already been bitten by the evil vampire, and with his magic in her veins she was on the brink of becoming another horrible undead thing. Taking her back to Rinaldo's hunt, the two men tended for the woman but she was already slipping away. In her last act on the world, Sara gave up her life (and unlife) to send her soul (and its magic) into Leon's weapon, the whip he'd been carrying this whole time. This super-charged the whip, turning it into a "vampire killer" that could be used against the Lord of the castle.

Magical weapon in hand, Leon finally had an implement that could deal real damage against the foul vampire. Stalking into the final keep, Leon faced off against Walter, battling fiercely. Beating the vampire to his knees, though, it wasn't Leon but Death (arriving out of nowhere) who dealt the killing blow to the demon lord. Death served a different master, and that was when the real evil was revealed. It was Matthias all along who had been controlling the strings of these events, all so he could steal Walter's power when the vampire was at his weakest. Fleeing before Leon could fight him, Matthias disappeared, leaving Death behind to clean things up. But instead of putting an end to the Belmont line, Death was instead bested by Leon; the rage the hero felt was too much, and he took down the Grim Reaper handily.

Leaving the now-empty demon abode, Leon knew there was still a evil lurking in the world. One day, he or one of his ancestors would have to face off against Matthias and his ilk, and so Leon swore that whenever that came to pass, the Belmont clan would be there, ready to fight the vampires and other evils of the world, the last line of defense for humanity against the undead.

It's important to note that Dracula never actually appears in this game. Walter has a move-set very similar to Dracula, bestowed upon him by the Ebony Stone (a magical McGuffin mentioned only this once in the series and never seen again), but Walter isn't Dracula. This is the first, and so far only, game in the series where some version of Dracula doesn't appear in any form.

That said, it so happens that Matthias Cronqvist is likely out Dracula. Matthias, in his own researches, had discovered the Crimson Stone (a counterpart to the Ebony Stone, and stealing Walter's artifact gave Matthias all the power he needed to become the most power vampire lord in the land. This last bit is important as the implication is that Matthias, by way of the Ebony and Crimson stones, becomes the vampire we eventually know as Dracula.

At least, that's the seeming intent of the game via series producer Koji "IGA" Igarashi. In its setup, Castlevania: Lament of Innocence isn't just an origin story for the Belmont Clan but also for Dracula himself. One helps fuel the creation of the other, and back, leading to a legacy that would come to define both families.

While we at The Inverted Dungeon would never tell Konami how to write their games (at least not to their faces, as they refuse to accept our meeting requests), we will point out that the likelihood of this Matthias Cronqvist actually being Dracula is absurdly remote. Dracula, as so many of us know, is based on a real person (Vlad Dracula, aka Vlad Tepes). He is one of the most well known, well researched figures in history, and for someone else to just "be" him (that he lived long before recorded history of the man, and somehow then was suddenly documented much later in life) is so unlikely as to be considered completely impossible and truly absurd.

The only explanation is that Matthias, who lived for hundreds of years at this point, was out in the world and ran into Vlad Dracula. Somehow he was able to steal Vlad's identity (presumably killing the real Vlad Dracula) and eventually became "Dracula", all without anyone who actually knew Dracula asking anything about it. How else could someone that was alive for 300 years at that point become someone that had, at that point, only been alive for a mere few decades?

It's even less likely that he just took the moniker "Vlad Dracula" without there ever actually being a real Vlad Dracula to begin with. Among all the other reasons we could come up with, the one that stands out most of all is that Vlad Dracula is the son of Vlad Dracul. It's in his name as Dracula means, literally, "Son of Dracul", the "a" at the end implying "son of". If he wanted to become "Vlad Dracul" and use that as his name (Dracul meaning "The Dragon", which is a pretty awesome moniker to take, we will admit) that would make more sense than him just spontaneously becoming Dracula. "And who was your father, then?" everyone would ask him, over and over.

To note, Matthias actually is also based on a real person: Matyas Corvinus, who did actually have political dealings with Dracula. Trying to reconcile all these weird histories and facts together is difficult (did we already say impossible?). Allegedly Konami was, at one point, working on a game that would explain this better, but that never came to be. Presumably they threw their hands up in the air and stormed off once they realized what a mess the continuity was when it was placed up against actual history. Better we just try to move on, then.