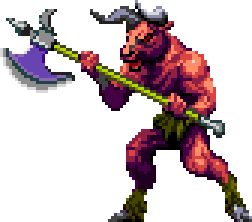 The Minotaur was a beast from Greek legend and, traditionally, there was only one. Named after its sort-of-father, King Minos of Crete, the Minotaur was the spawn of the King's wife, Queen Pasiphae, and a gorgeous white bull. As the tale went, Minos prayed to Poseidon and asked for a gorgeous white bull as a sign of the god's favor, which was sent, but in return Minos was supposed to sacrifice the bull, which he didn't. Instead he substituted a different cow and Poseidon was none too pleased. he forced the Queen to fall in love with the bull, she then had a wooden cow made that she could climb inside, and then she got the bull to, well, you know. The half-man, Half-bull Minotaur was the result.

Ashamed at this child, Minos had the creature put into the center of a great labyrinth. Minos then sacrifices (collected from conquered lands) sent to his kingdom so he could send them into the labyrinth to feed his monstrous cow-man. One of these "sacrifices", Theseus, was then able to navigate the labyrinth successfully. He slew the beast and escaped, being the only man to come out of the maze alive. This ended the tale of the Minotaur, but the legend of the beast lived on.

As far as the Castlevania series is concerned, the only aspect of the beast that carries over is its looks. None of the mythology behind the creature was of importance to the series -- this is the tale of Dracula, not some Greek King -- and so the other aspects, such as the maze, were dropped. It's sad, because what the series really needed was some hot wooden cow action. (Editor's Note: No, no it did not.) 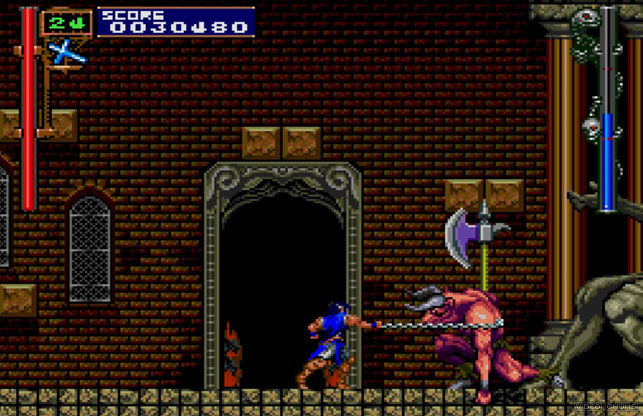 The Minotaur first appeared in Castlevania Dracula X: Rondo of Blood as the boss of both Stage 3 and 3' (depending on the route the player took thought the game). In both appearances the boss behaves the same way with a few attacks he can perform. Armed with an axe he could quickly stab at the hero with the head of the axe, high jump across the screen while swinging the axe down, spit out a stoning fluid (that temporarily freezes the hero), rip up parts of the floor to chuck at the heroes, and perform a bull charge. This last attack can be jumped over (with a back-flip ideally) and it also provides the best opportunity to deal damage to the boss. If the hero avoid the charge, the Minotaur will get its horns stuck in the wall and be held there for a time, so the heroes can easily layer on the damage at this point. Just be careful as, once his health is depleted, the bull will perform a flaming uppercut as his desperation move to cap the battle.

In his next appearance the Minotaur was reduced to a basic enemy in the Atlantis and Leaning Tower levels. These little minotaurs will attack the heroes with a variety of weapons, from swords to polearms and bits of columns they rip off the stages. They don't have a lot of health, though, so it's more important to avoid their weapons (and bull charges) than to worry about dealing a substantial amount of damage. These are enemies, not bosses, so treat them accordingly.

The Minotaur next appears in the series paired with the Werewolf (for shades of Slogra and Gaibon). The two are summoned together in the Colosseum by the mind-controlled Richter Belmont and the hero will have to defeat both of them to win the day. The minotaur functions similarly to how he did in his Rondo of Blood appearance, attacking with stabs and slashes from his axe as well as performing bull charges. Although taking on both enemies at once can be difficult, neither of them are very strong so they can both be taken out pretty quickly. It's best to focus on one enemy to open up the fight and make the other easier to deal with. Also note that these two enemies will appear again in the Reverse Colosseum in harder (and more plentiful) versions populating the halls of this area.

The Minotaur is back, in a form, as a lesser enemy in his next two encounters. He first appeared in Castlevania: Legends as the "Jumping Demon", a human body with a bull head who would, naturally, jump around at the heroine. This was then followed by Castlevania: Circle of the Moon where the Minotaur was upgraded slightly but still considered a minor enemy. Here he had his axe, and could swing it at the ground to cause a shockwave that would travel for a distance along the earth. A pack of seven of these guys (with more health) even appeared in a room of the Arena, making for a potentially very nasty encounter. 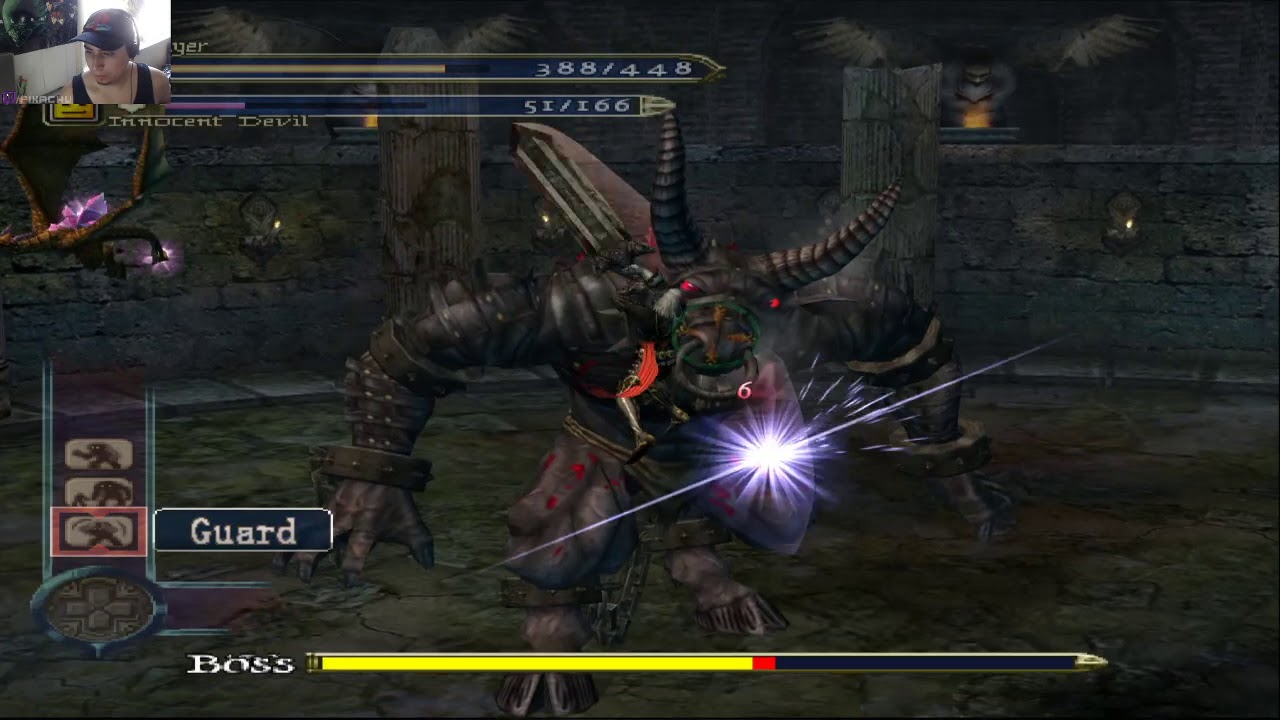 The Minotaur pulled double duty when next he arrived on the scene in Castlevania: Harmony of Dissonance. The first was a traditional Minotaur fight where the beast came armed with his axe and will swing it at the hero. It was the Minotaur v2 (the beast's actual name) that proved more interesting. This version of the monster had a morningstar-style ball-and-chain which he would wing at the hero at varying rates. Still, both bosses could be taken out with good use of sub-weapons and, like most enemies in Harmony, they were more "design" than actual fight.

For Castlevania: Aria of Sorrow the Minotaur returned as a normal enemy, this time in two forms. Both come equipped with their axe, which they'll swing at the hero. The Minotaur soul would grant a +8 Strength bonus when used while the Red Minotaur found later in the game would give the hero a bullet soul that would swing a massive (and quite damaging), screen-filling axe. That soul is very useful against the final boss of the game.

In Castlevania: Curse of Darkness, the Minotaur (aka Minotaurus) appears in a massive (and possibly undead) form. Here this giant, hulking beasts wanders around his arena carrying a column which he will swing at the hero. These attacks include smashing the pillar against the ground (which, after three strikes, will break the pillar completely, forcing the Minotaur to grab another from around the room); swiping the column at the player (once or twice in combination); throwing the column at the player; using the pillar to swing around the room; and jumping high in the air and blasting the room with a shockwave when he lands. This is a harder fight, and the attacks from the Minotaur can be hard to dodge without good timing.

Finally, in Castlevania: Judgment, the Minotaur reappears in a similar form to his Curse of Darkness boss fight. He appears in both Story Mode and Castle Mode, and here he has but two attacks: swiping the column at the player or doing his jumping attack.

Other Appearances of the Minotaur:

Although not an enemy in the SNES title Castlevania: Dracula X, the Minotaur does at least make a cameo appearance in the "remake". Here, he can be found in the dungeon of Stage 4, trapped behind bars. The player can't interact with him but this is a nice cameo in reference to his appearance in the previous version of this game.

The Minotaur's next cameo was a tad more substantial. In Castlevania: Lament of Innocence there are statues of minotaurs in two rooms of the Ghostly Theater. The first room has boulders that are flung at the hero, Leon Belmont, and to unlock the doors of the room Leon had to lure the boulders in front of the statues, breaking them. The next room then featured colors statues, red and blue, and for these all the statues of the same colors had to be destroyed to unlock the room. the Minotaur, though, was never an actual enemy in this game. 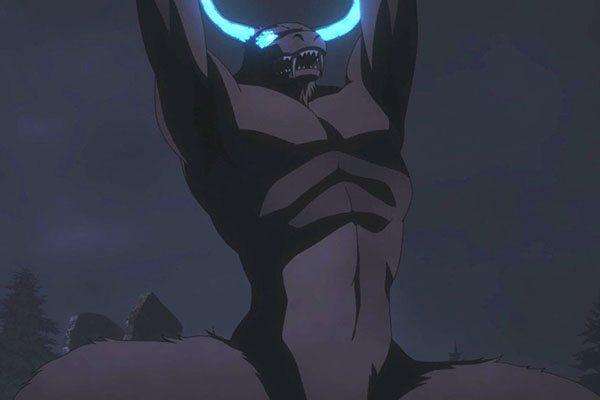 Two different Minotaur-like Night Creatures show up in the Netflix Castlevania Anime. The first appears in season two at the Belmont estate. Our heroes -- Trevor, Sypha, and Alucard -- were deep in the manor's old hold, studying the books and magical items held within, when a band of Night Creatures, with a Minotaur included, raid the estate and attempt to break the seal binding the crypt closed. The Minotaur, black of color with glowing blue eyes and horns (thus implying he was made by Hector), smashed against the seal over and over, channeling magic and growing in size as the assault went on. This beast was eventually felled by Trevor in the following attack once it had smashed through the seal and opened the deepest hold.

Meanwhile, in season three, Trevor and Sypha came upon a band of Night Creatures as they traveled across the land. This band included a Minotaur-like creature (although its horns were more elk-like in appearance) who wandered around with an axe clutched in its hands, along with a werewolf-like beast (further connecting these two monsters). This beast, too, was killed by the heroes in short order.