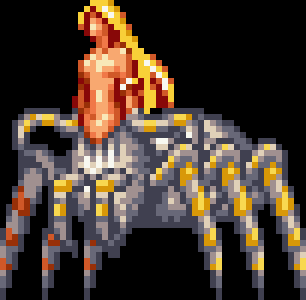 While the halls of Castlevania are haunted and dusty, what's surprising is how few of the games in the series feature any kind of spider. Some of the earlier titles, like Castlevania II: Simon's Quest, Castlevania III: Dracula's Curse, and Castlevania II: Belmont's Revenge did feature the eight-legged critters, but as the series wore on the ubiquitous arachnids feel off in their appearances. Other creatures, like the various beasts of mythology that became prevalent, took up the slack, leaving only the common Bats and Mermen to pick up the slack. The halls of Dracula's Castle may have been musty and abandoned by the living, but spiders apparently were exterminated back out of the castle.

Of course, for the later adventures a similar creature did appear to add their eight-legged freakishness to the collective: the Arachne. Original introduces as the "Spider Centaur" in their first appearance for Castlevania N64, these spider-women became a regular monster through much of the later parts of the series. They had similar function to the original spiders, crawling around and spewing webs at the heroes, meaning that normal spiders weren't really needed in the series anymore.

And you can understand why, really. Normal spiders are gross but spider-creatures are grotesque. They up the horror and, end of the day, Castlevania is a series of games built on the ideas of classic horror. The Arachne felt in line with the art style of the later games. She's evil, she's brash, and she's there to spit webs. A take no prisoners (or, really take them so you can eat them) kind of woman for the future of the series. It works. 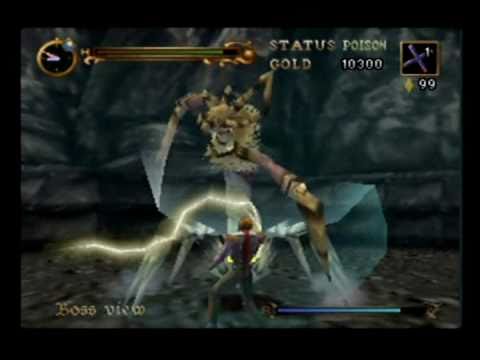 Canonically, the first true appearance of the arachne would be in Castlevania: Circle of the Moon (if you consider that game to be "in canon", of course), appearing as regular enemies in the later parts of the game. But the first time we have an arachne as a boss was in Castlevania: Legacy of Darkness. Here the hero of the game, Cornell, found himself in the land of the spider-women when he dropped into the cavernous Tunnels deep beneath Castle Dracula. The hero had to battle against the spider creatures while finding a safe route through the sprawling tunnels and it's intricate suspended cart system.

It was only at the end of the Tunnel, though, that Cornell came across the spider-women's leader, Queen Algenie (a mistranslation of Arachne), guarding her birthing chamber. The spider queen guarded the exit from the Tunnels, forcing Cornell to battle the spider-woman to escape. It was a drawn out battle that saw the queen detach herself from her egg pod, crawling around to take on the hero. But, once defeated, the way was clear and Cornell was able to progress much deeper into the castle proper.

Of note, the Queen Algenie fight is exclusive to the Legacy of Darkness version of the story. If you play through the game as Henry Oldrey (who was exclusive to the game), Reinhardt Schneider, or Carrie Fernandez, you would have to face this foe on their storylines as well (even though those technically came later, after her death).

Meanwhile, in Castlevania N64, the spider queen does not show up at all. This would imply, if we take the first game as the "canonical" version of Reinhardt's and Carrie's stories, that the Queen dies at Cornell's hands and only her spider-women were left to continue the tribe after her defeat. Just an interesting continuity thought. 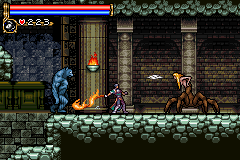 The the official release order of the series, the Arachne first appear as the enemies "Spider Centaurs" in Castlevania for the Nintendo 64. The heroes first found themselves in a tunnel, ebbing all around them. They then spy a beautiful woman bathing in an underground lake, but soon she rises from the water, revealing her torso to be that of a giant spider. The heroes then have to fight against the spider-creatures as they attacked, spitting poison from a distance before coming in close to lunge with their tridents. Spitting will become a regular theme for these encounters.

Queen Algenie is the first evolution we find, in Castlevania: Legacy of Darkness. First seen attached to the egg sack she had on the wall leading to the exit, Arachne acts like a powerful turret. She'd shoot out webs at the hero, and if the hero was caught by the web they'd get sucked in to be fed on by the spider queen. She's also drop little spider babies on the floor that was skitter around and attack the hero. But, if Cornell got too close, she spit poison at him, forcing him to balance distant and close ranged attacks at the foe. Note, though, that attacking the webs and spiderlings could drop useful items for the fight.

Once her first health bar is depleted, she'll detach from the wall to crawl after the hero. She'll strafe around the room, working her way closer to Cornell (or the other heroes, on their play-throughs) until she can strike with her clawed limbs. She'll also spit poison from time to time as well. Be careful not to get pinned to the side of the boss chamber as Algenie can easily corner you, combo-ing you over and over, draining your health. But of course you do need to watch out because Algenie can also hit you with ranged webs. If your hero gets caught, she'll bundle them up and then swing them around, chucking them against a far wall, dealing massive damage. This is a tough boss with a lot of health, so come in prepared.

From here, the Arachne(now going by that name for all future releases) is relegated back to being just a regular enemy. In Castlevania: Circle of the Moon, the spider creatures appear in the Catacombs after Death is defeated, as part of an enemy upgrade for the early parts of the game. She'll track along the floor, back and forth, occasionally spitting sticky webs at the hero, slowing them down for a time. A stronger version also appears in the Arena, several of them appearing alongside a trio of Succubi.

They next appeared in Castlevania: Aria of Sorrow in the Study. They show up in a couple of long hallways, which are also patrolled by Ectoplasm and Fleamen. They'll back away from attacks by the hero while sometimes spitting jets of webbing (that deal damage) at an angle towards the hero. Defeating them can grant the Arachne Bullet Soul which lets you fire off damaging webbing.

Finally, a new version of the Arachne made an appearance in the Tristis Pass of Castlevania: Order of Ecclesia. These spider-creatures look different, with less of a creature-taur style body. They will skitter around, spitting acid at the hero, poisoning them on contact.

Arachne hails from Greek mythology. She was a weaver of some skill, who gained the attention of the Goddess Athena (and, if you know anything about the Gods and Goddesses in Greek mythology, this will not end well for Arachne). Feeling challenged by the "lowly mortal" as some said Arachne's weaving was better even than Athena's, the Goddess setup up a contest between the two of them to see who truly could weave a better tapestry. Arachne won, which only angered Athena more, so the Goddess turned the woman into a spider. You know, a normal and sane reaction.

Of course, this is all a means to explain why spiders are such good weavers. Clearly one of them was a woman before the gods turned her into a spider, and thus all spiders come from this one woman-spider, and that's how we get spiders. Usual mythology stuff.

The Arachne of myth (the spider-woman) appears in Marvel comics, where she acts primarily as an antagonist. She's different, though, from the Goddess spider (a Hulk version of the spider that bit Peter Parker) and the Spider God, who was just a giant spider, and all of these are different from the spider-deity that apparently controls the great Spider-verse. Comics are... well, rather silly.

And while Arachne's tale has not been the source of much depiction in movies and television, it did feature in more than one painting, including "Minerva and Arachne" by Rene-Antoine Houasse (1706) and "The Spinners, or, The Fable of Arachne" by Diego Velazquez (1644–48).