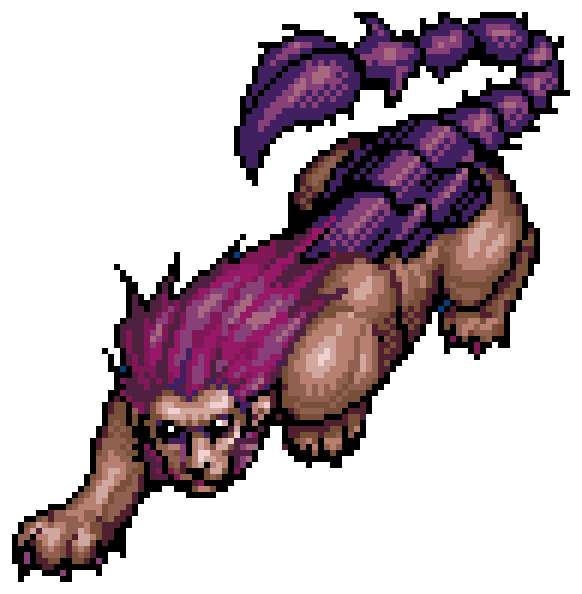 The Castlevania series has a long tradition of pulling from classical myth for the monsters populating Castle Dracula. This started back in the very first game, with Medusa appearing along side the classic Universal Monsters of Frankie, The Mummy and, of course, Dracula. Since then, more and more creatures of myth and legend have appeared in the series, with that count positively exploding once the series made the full committed move to Metroidvania game play.

One game that really worked a lot of mythological creatures into its core was Castlevania: Circle of the Moon. Not only were many monsters pulled from myth and legend, but the game featured a deep and interesting magic system, the DSS Cards, which used creatures and gods on the representative faces of the magical cards. This created a kind of "element system" for the game, and assigned behaviors for each of these monsters that would carry through, to a certain extent, throughout the series (even if the game itself was quickly removed from official canon).

In the case of the Manticore, the creature was assigned the "poison" element. That poison element would come into later games when the manticore acted as an enemy. It's tail could inflict the poison status upon heroes, reducing their attack power for a certain amount of time. This then created a legacy for the manticore within the world of Castlevania, fleshing out the unified world for the series across its many titles.

The first appearance of the manticore wasn't as a monster to battle but a magical card to collect. Vampire hunting apprentice Nathan Graves found himself trapped within Carmilla's Castle as the evil vampiress used Hugh's teacher, Morris Baldwin, as a vessel for the resurrection of Dracula. To save his master, Nathan had to venture through the castle, defeating monsters and collecting equipment, all to gain the power needed to defeat Carmilla and, eventually, Dracula himself.

Along the way, Nathan stumbled across magical cards, ten in the form of Gods and Goddesses and ten in the form of powerful monsters. These were dropped randomly by enemies, so Nathan found these cards in fits and starts. Nathan's first opportunity to gain the Manticore card came from the Thunder Demons in the Machine Tower, who would drop the card infrequently at best. Gaining that card gave Nathan poison spells, when he paired the card with one of the many God cards he'd found. This allowed him powers like a poison whip, poison bombs, and even a Manticore summon, when cast.

Circle of the Moon was the only game in the series to feature the DSS Cards, or any kind of magical system like it, and it was the last time where the Poison Element was something the hero could cast as part of their spells. While games like Castlevania: Harmony of Dissonance and Castlevania: Lament of Innocence featured magical systems that did use something akin to elemental magic (with Tomes and Orbs, respectively), the Poison Element was not included in those powers. 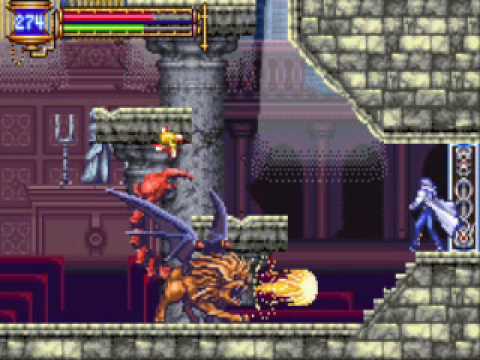 Over two centuries later, it would be hero Soma Cruz who would next encounter manticores. After arriving at Castle Dracula, which was trapped within an eclipse (to seal away the demon's dark magic), Soma was forced to explore through the castle to find a way to escape the eclipse (and the seal keeping him trapped within). This eventually led him into the Chapel where, deep within its bowels, he came across a manticore. This beast, which spit fire while lashing around with its scorpion-like tail, guarded the way forward and was a forced battle that Soma had to take. If he was lucky he could end up collecting the monster's soul, granting him the ability to turn into a hulking, powerful beast for a short period of time.

Much later in his quest he came across a second manticore, this time guarding a room within the Float Gardens. This beast didn't block Soma's path but it did present a second opportunity for him to collect the soul, and gain the manticore's beastly form, if he had so desired.

Aria of Sorrow featured a number of unique souls that weren't repeated in its direct sequel. Although manticores appeared in both games, only Aria had it bestow a hulking "rush soul" form. While similar souls were available in the sequel (albeit not as powerful in some respects), manticore's soul was changed. The hulking beast from was removed, likely to re-balance the sequel and take away an early source of extreme damage from the hero. 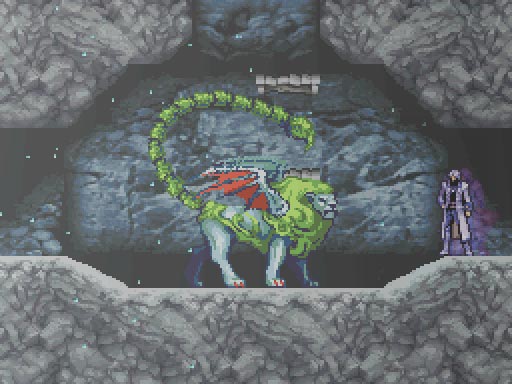 A year later, after Soma had dealt with the events at the resurrected Castle Dracula, he was forced to go to a new castle. This time around a cult of Dracula worshipers had built their own castle and filled it with monsters they summoned. To prevent someone else from gaining the power of Dracula, and to stop the cult, Soma was forced to go to their castle and fight through the various creatures inhabiting within.

Among those creatures was another manticore, the scorpion-tailed, lion-headed beast. The beast patrolled halls within the Wizardry Lab, fighting all who came in his way. But then, later in his quest, Soma also ran across a more powerful version of the manticore, the mushussu, which defended the heights of the The Pinnacle. Both creatures granted Soma powerful tails when he gained their souls, making them worth additions to his magical collections for his quest.

It's also worth noting that a version of the manticore appeared in Castlevania: Grimoire of Souls which, while it did take place in 2037 AD, technically revisited these two adventures in Soma's life, so it's not technically a different version of the beast.

Fighting Against the Manticore:

In all of its various incarnations as a monster (both manticore and mushussu), the strategy is similar. The beast has to major forms of attack: fireballs, which it will spit at the hero, and it's tail, which it will wiggle before lashing at the hero. Getting struck by the tail will cause a status effect (poison normally, or petrify for the mushussu). being able to dodge these two attacks, while layering on damage, is all the hero needs to succeed.

The manticore hails from Persian mythology. It was a creature with the body of a lion, the head of a man, very sharp teeth, and a braying voice. Sometimes it would appear with wings (and that was reflected in the design for the creature in its appearances in the series), although it's not always described as a flying creature. It's tail was that of either a dragon or a scorpion (the latter of which was it's design for the Castlevania series). After its initial appearance in Persian myth, as the merthykhuwar 9meaning "man-eater"), the Greeks adapted it's name to be that of "mantichoras" or simply "manticore".

Over time the beast appeared in various mythologies, including various Medieval texts ad bestiaries. It was even, for a time, a fixture of heraldry (before being usurped in the art by the "man-tiger" (aka "mantyger").

Of note, although the mushussu is linked to the manticore in the Castlevania series, they aren't entirely related in mythology. The mushussu was a dragon-beast, with a horned head, a crest, snake-like tongue, lion forelimbs, and talons of an eagle. They are related in that both creatures are "dragon-like", but they come from varying mythology (the mushussu being Babylonian in origin) without a direct relation between. In fact, it is theorized that the mushussu name may have been the inspiration for Mushu in Disney's Mulan (while not really appearing in that Chinese folklore).