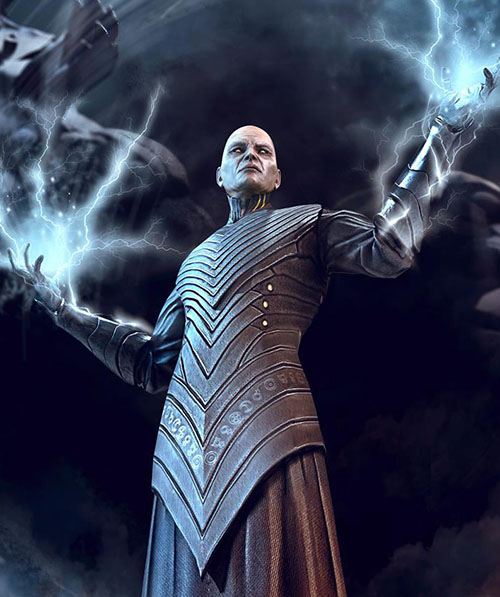 In the story of Castlevania: Lords of Shadow 2, the darkest demon on Hell, Satan, need acolytes on Earth to do his bidding. Unable to set foot on the soil without a proper summoning (which, itself, requires the world to be turned to darkness and ruin), the devil instead has half-human / half-demon children who work to ensure his arrival. Satan is barred from the Earth but those with human blood may walk upon the ground.

Nergal serves as the second of three acolytes our hero, Dracula (aka Gabriel Belmont) faces off in his quest to ensure Satan is not able to take over the Earth (ruling the Earth is Dracula's gig). A tall and thin man which powerful magics Nergal works behind the scenes, letting his possessed minions do his bidding (so he doesn't have to directly get his hands dirty). Confident and proud, he considers himself far superior to the likes of a vampire (or a Belmont).

One can trace the inspiration for Nergal back to Mesopotamian mythology. Worshiped through all periods of Mesopotamian history, Nergal (aka Meslamtaea) was the god of war, death, and disease who ruled over Kur, the Mesopotamian underworld. That translates well to his role as one of Satan's acolytes, working to ensure the ascension of Hell from the top of a tower of war and power. 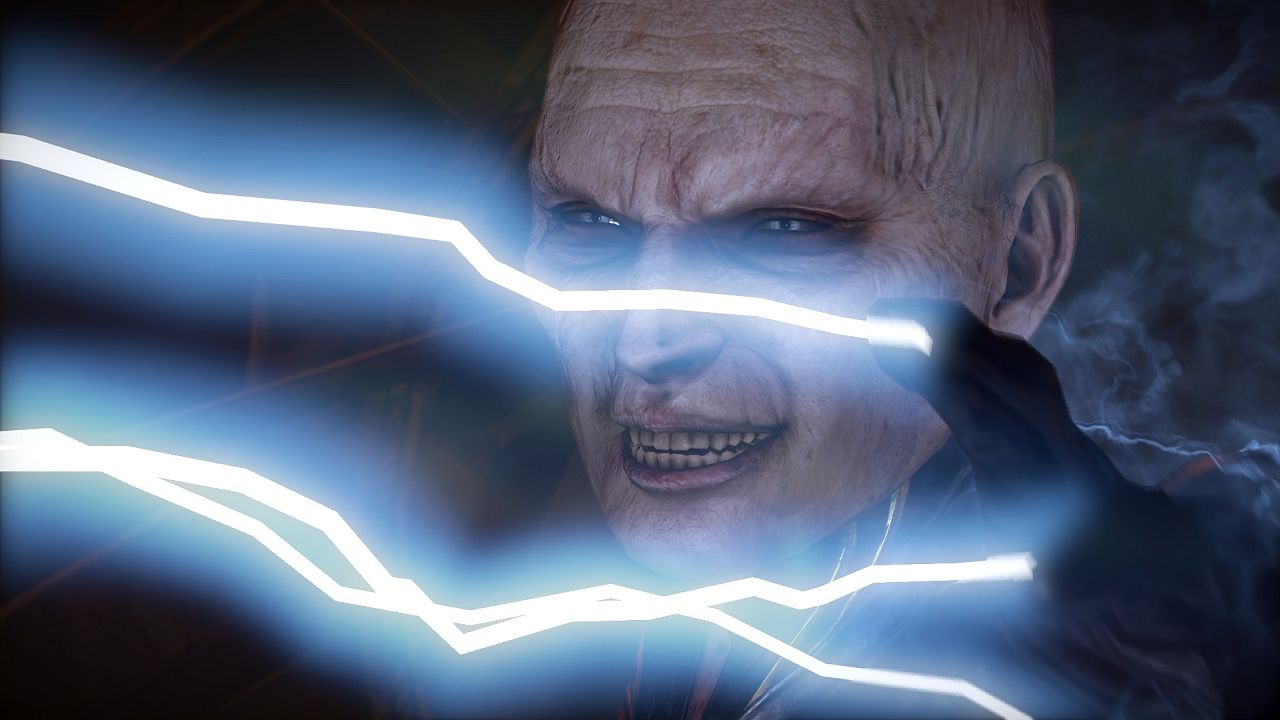 Dracula's first brush with Nergal doesn't come from a face to face encounter. Instead, Nergal's power takes over a statue, one armed with a sword, who stab's Dracula's descendant (and recently gained ally), Victor Belmont. Dracula watches as Victor's soul leaves his body, the magic of it drawn upwards to the ramparts of a great tower high above. With Victor slain (and having looted his corpse for the shard of a powerful relic, the Mirror of Fate, which also forced Dracula into a battle against a blood-infected statue), Dracula then sets off for that tower, the headquarters of an weapons manufacturer, assuming (rightly) that one of Satan's acolytes resides within.

Scaling his way up, Dracula soon confronts Nergal, the head of the munitions plant and, yes, one of Satan's acolytes. Very quickly Nergal reveals his power, striking Dracula with power blasts of electricity, hobbling the vampire. Toying with his food, Nergal follows as Dracula desperately crawls away, the magic too much for the Dark Prince to handle. Nergal, though, soon finds himself walking into darkness, a shadowy rift that, quickly, transports him, and Dracula as well, to the high, snowy ramparts of Dracula's castle.

Removed from his own lab, Nergal suddenly finds himself cut off from his most powerful magic, all while Dracula grows strong on his own lands. Realizing he underestimated the vampire, nergal gives his respect. He then pushes his magic into three statues high up on the walls of the castle, turning them into his minions to battle against Dracula. Each statue that Dracula destroys, though, weakens Nergal until, finally, as the last golem crumbles, it's just the beaten and battered body of Nergal prone before the vampire. Only then does Dracula crush the half-demon's head beneath his boot, spelling the end of Nergal Meslamstea. 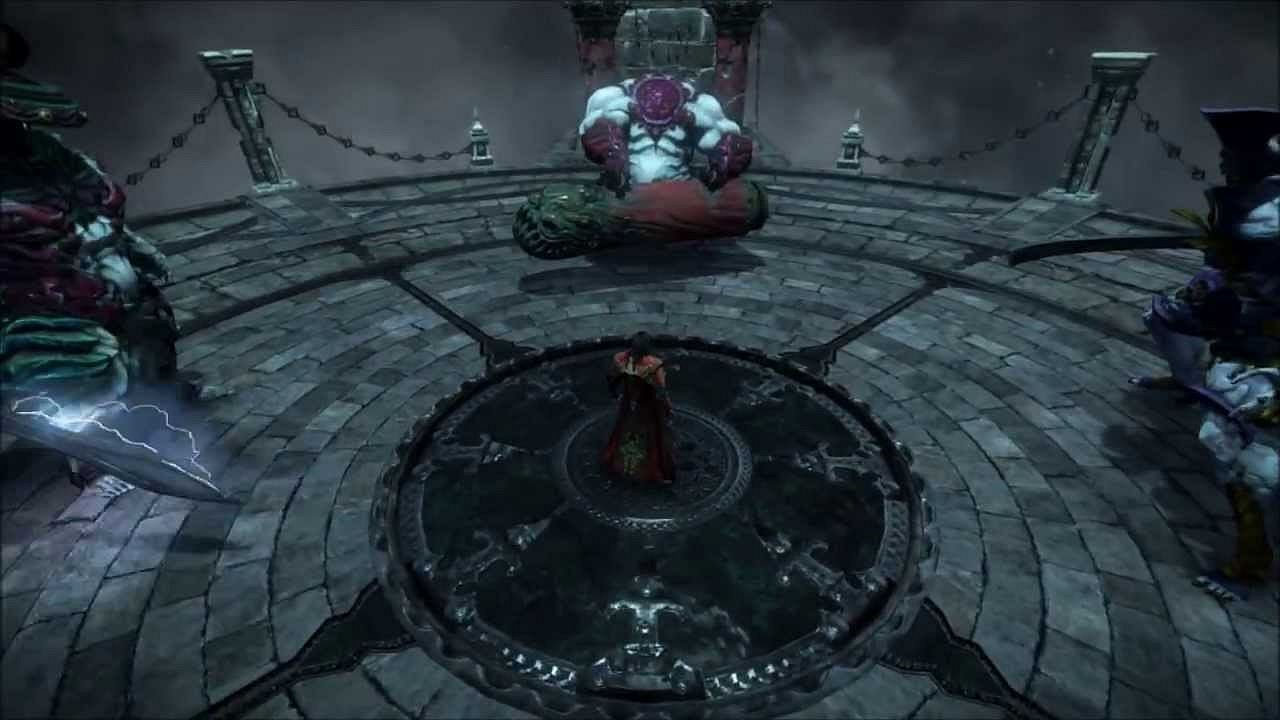 Instead of fighting Dracula directly, Nergal possesses three statues -- one armed with an electrically-charged sword, one with a broken column it uses like a club, and one with a vicious spear -- and has these three battle Dracula instead. Each statue has its own attacks. The sword statue is slow but will unleash powerful, sweeping sword strikes. It can also unleash powerful, lightning-charged arena-long sword slashes across a single line of attack. And, if the hero gets too close for too long, it'll put up a radial shock shield to damage its foe. The club golem can smash the club on the ground, creating a powerful, radiating shock wave. It'll also slowly smash and bash it at the hero. The spear wielder will dive in with quick, whirling attacks. It can also spin its spear very quickly, creating a sucking vortex that will pull the vampire in (if he's caught in it, drawing the hero to the golems so that ca attack him altogether (this requires a QTE button press to escape). And it can turn itself into a tall cyclone that will home in and chase Dracula.

Taking out these beasts can be hard. They each work in a coordinated manner, but they will also do their best to avoid attacks. The club golem can block with his giant weapon while the sword master will parry away, always working to stay out of reach of the hero. However once a third of their collective health is removed, a QTE will occur, and, upon success, Dracula in this event will use the spear of one golem to stab the sword statue, killing it, leaving only two remaining. Down one on their team, the other two will gain electricity on their weapons, allowing each to add shock magic to their own attacks. Despite this additional power, the two are less of a threat than when they were three, and it's simply a matter of handling their attacks as you did before.

Knocked down by another third, another QTE will play, this time between Dracula and just the spear golem. When successful, Dracula will break the spear and then smash the golem. This will send its magic on to the last, giant statue to defeat. The battle will then proceed as before (albeit even easier with only one to tangle with), right up until the beast is almost dead. Only then will it unleash a powerful final attack. It'll summon a great void of darkness behind it and begin shooting out targeted blasts of lightning at the hero. Dracula has to trudge slowly to the beast, avoiding its attacks, until he gets within range. Then a cut-scene will play, with QTEs, and this will lead to the destruction of the last golem and, thus, lead to the death of Nergal himself.