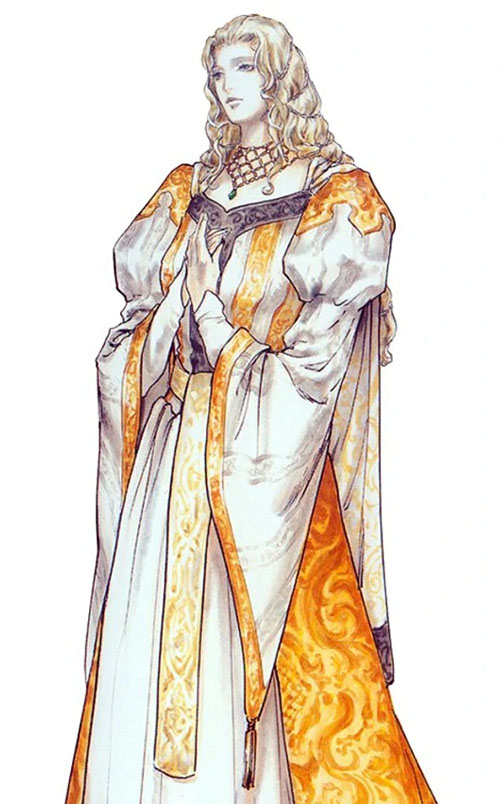 As we've noted elsewhere, wives in the Castlevania series tend not to be long for this world. The often end up dead, or kidnapped, or kidnapped then dead, all to motivate the big, burly man at the center of the story. And, sometimes, the wife that does also sends the villain into a spiral, raging against god and looking for some kind of revenge against the world. As it turns out, Castlevania: Lament of Innocence features both.

While that game's story is focused on Leon Belmont and his quest to rescue his beloved Sara Trantoul, the story really begins much earlier, with Matthias Cronqvist and his wife, Elisabetha. Matthias was a knight, one of an elite squad who protected a large swath of Wallachia. Working with his friend and fellow knight, Leon, the two protected the region from many of the outside threats -- not just the Huns but also all kinds of demons and devil. They had fame, power, and responsibilities.

But then Matthias's wife, Elisabetha, fell ill while he was away on an expedition. By the time he returned she'd already died, a victim of the cruel fates of God. Grief stricken, Matthias raged at God, at the world, and looked for some way to fuel his hate and take his vengeance at all that had betrayed him. He soon learned of the power of two great stones, the Crimson Stone and the Ebony Stone, that could not only grant someone eternal life (as a vampire) but also boost their innate powers so much they'd be like a god. Matthias lusted after these stones, one of which was in the possession of the vampire lord Walter Bernhard. All he needed was Walter's death, to help charge the Crimson stone, and he'd be able to reap untold powers.

But he never would have followed this plan were it not for the death of his wife. Elisabetha, who doesn't even show up in the game properly, is killed to motivate her husband's pain. It's sad, but what's more tragic, really, is just how often the series goes to that well.

Of note, of course, is that this Elisabetha was likely based on Elizabeth of Celje, the historical wife of Matthias Corvinus, the future King of Hungary (and the historical inspiration for Matthias Cronqvist. Any additional connection between her name and that of Elisabeth, wife of Dracula from the 1992 film, Dracula, is purely coincidental, but a nice touch if it was, somehow planned by IGA and Konami. Certainly you can draw parallels between Dracula's early story in that movie -- the death of his wife and his renouncement of God, becoming a vampire -- and what Matthias goes through here.

It's also worth noting that is assumed that, in the series, Matthias eventually becomes Dracula. Dracula, it should be noted, has said he only had one love in his life, his dead wife Lisa, but here Matthias has another wife before that. This is one of those weird details that makes some fans (the editors of The Inverted Dungeon) assume that Matthias actually isn't Dracula at all. But we're unlikely to get any clarification on that matter at this point.