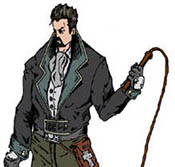 It's hard to know how the Castlevania series would have evolved had Castlevania: Resurrection not been cancelled. Developed for Sega Dreamcast, the title was reported to be upwards of 80% complete for the the game was scrapped, although that's the less fault of Konami and more due to Sega being unable to advertise their system, or plan for it, or do anything that might have made the Dreamcast a success.

Certainly it's true that Konami wasn't entirely happy with the development process, as the team creating Resurrection was based out of the U.S. and there are stories of friction between the U.S. office and Konami Japan. Still, something with that much work put into it couldn't have been easy to kill, so it's entirely possible that if the Dreamcast has sold better, Resurrection might have come out, and then where would we be? With a, entirely different branch of the Belmont family alive and well.

See, Resurrection was going to feature two Belmonts, both dragged across time to fight Dracula during the Great London Fire of 1666 AD (a real historical event as well as a nice nod towards the number of the beast). One of the heroes was Sonia Belmont, at the time to progenator of the Belmont clan (before she was retconned out of existence), while the other would have been Victor, a shiftless gypsy-type from the 1800s who dodged out on his commitment to the clan. If their game had come out, Sonia likely would never have been removed from continuity and Victor... well, who knows? 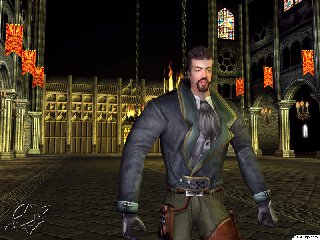 Victor was born to the Belmont clan in the 1800s, Victor ran from home at an early age, shunning his obligation to his clan. Instead he took up work as a warrior, working for whoever paid well, trying very hard to not be reminded that he was technically the heir the Belmont lineage.

Of course, all his best laid plans to never be a hero were thrown into the air when he was transported back to 1666 AD England during the time of the Great London Fire. Dracula's castle appeared against the fire and smoke and Victor realized he probably had to finally become a hero if London were to be saved (and, based on his character, this was presumably a difficult decision to make).

Take up his family's obligation he did, though, with the help of his ancestor, Sonia Belmont (who had also been transported to 1666 AD, although for her it was a leap forwards, not back). The two fought their way valiantly to the top of Dracula's castle, defeating the evil vampire lord and saving London from his dark magics.

In the end Victor learned the true spirit of a hero and finally became the warrior his clan needed.

As some fans have pointed out, Victor's story starts in the 1800s, right around the time that the Belmont clan disappeared, entrusting their whip to the care of others. This might have been inspired by Victor's storyline -- if he'd shunned his life as a vampire hunter, it's probably that the clan would have had to find other caretakers for the whip what with their chosen hero bailing on his life (and possibly ending the family line with him). It's an interesting theory, to be sure.

It's worth noting that Victor was originall intended to be called "Julius" (in reference to Julius Belmont from Aria of Sorrow and Dawn of Sorrow. His name was changed out of respect and not interfere with IGA's legacy in the series.

What's interesting is that while Victor Belmontnever officially appeared in the main Castlevania series, a character with the same name did appear in Castlevania: Lords of Shadow 2. It's hard to know if this was an intentional nod to the cancelled character or if Victor was just a common English name they simply chose (although we at the Inverted Dungeon certainly like the idea that Konami made an homage to Resurrection).

In the game, Victor is the last of the Belmont line alive in 2057 AD. Acting as the head of the Brotherhood of Light, and armed with his family whip and other weapons, Victor stands against the evil that has spread across the land. First appearing as a hooded figure following Dracula (ne Gabriel Belmont) around, Victor eventually confronts the goddamned bathead. Of course, Dracula is working to fight a greater evil, Zobek (and his master, Satan). Victor eventually teams up with Dracula against the forces of evil and sacrifices his own life to protect Dracula and aid the vampire in his quest.

Upon his death, Victor charges Dracula with carrying on the Belmont line, as the vampire is the last Belmont alive (in any capacity) at that time.

It's a bit of a lie to say you even get to "play" as Victor. He never appears as a playable character, and one of his two appearances was cancelled outright without much in the way of images or footage existing of what he would do. Although often depicted by fans as having a whip, it's probably that whatever weapon Victor would have used wouldn't have been the proper Vampire Killer (again lending credence to the idea that Victor is the reason that the Vampire Killer had to be passed to other caretakers). Instead, if he did use a whip, it was likely some magical knockoff. He could have used sub-weapons, of course, as just about everyone had those in the series, in one form or another.

In Lords of Shadow 2, Victor is shown with a version of the family whip (a replica Combat Cross) and various relics and sub-weapons. In his boss fight against Dracula he's a capable fighter (he's remarked upon in the game as perhaps one of the "most powerful Belmonts"). His boss fight escalates, with Victor growing in power and strength, until he throws devastating final moves in acts of desperation. he is not a fight to be trifled with.