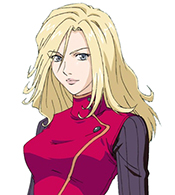 The Sorrow games are interesting inclusions in the series. Taking place after the actual death of Dracula (permanent, seemingly final, never gonna come back death), the plots revolve around how he died, what happened, and ensuring that no one ever gets the power of the Dark lord again. In a way, they're like companion pieces to Lament of Innocence, which itself was interested in how Mathaias (ne Dracula) went on to gain all his power to begin with.

Functionally that makes the two Sorrow games something of end-caps to the series, the final word on the world of Castlevania, at least as far as the timeline is concerned (well, more or less, so long as you're willing to ignore the time travel shenanigans of Judgment). From this angle, it makes sense that the "last" games in the continuity would feature all the highlights of the series: Metroidvania gameplay, a Belmont, a cameo from Alucard, and, the subject of this bio, a Belnades sorceress in Yoko.

As a character, Yoko is definately a Belnades sorceress in the mold of Sypha (especially in the second game, Dawn of Sorrow). She's limited to the three main spells of her clan, with no fancy extra spells or other major changes. She gets by on the power of Ice, Fire, and Lightning, and her magical Belnades staff. it's just a pity she didn't get to do more in her few appearances, as a future version of the Belnades clan was worth exploring in more detail than we got in her few games.

A descendant of the famed Belnades clan, Yoko was a power sorceress working for the Roman Catholic church. Her job was to find information about potential attempts to resurrect Dracula and be there, on the scene, to try and stop these dark and evil dealings. Dracula had died years before, his power and castle both sealed within an eclipse. Years later, though, the dark magics were building. That's why Yoko was at the Hakuba Shrine when Dracula's castle reappeared in 2035 AD -- she had a job to do no matter who else showed up. 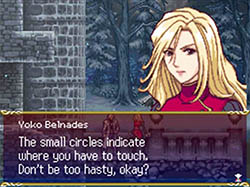 Yoko was deep into the castle when Soma Cruz showed up, and she warned him about the dark magic residing within the halls. It's through these dealing with the young student that Yoko learns of a pretender to Dracula's throne, Graham Jones, a man hell-bent on stealing Dracula's power and becoming the Dark Lord, the one, true Dracula. In an attempt to stop Jone, Yoko confronts the madman but is mortally wounded in the fight. It's only through Soma's intervention that Yoko is saved.

Taken to the entryway of the castle by Soma, Yoko, unconcious from her wound, is bandaged up by Genya Arikkado (another person at the castle working to stop Dracula who also, spoiler, is Alucard), and then left in the care of Mina Hakuba, Soma's kinda-sorta girlfriend. She stays there, at the castle gates, until basically when the story is over, awakening only right near the end to lend her moral support to Soma in his attempt to finally stop Dracula's power from ever coming back.

As we've noted elsewhere on the site before, female characters in the Castlevania series don't meet great ends. Sure, at least Yoko doesn't die in her first appearance in the series, but she's still mortally wounded and basically used an a motivator for the fated male, Soma, forcing him to recognize his own needs and what he must do. It's a role many female characters take in this series. Thankfully, she gets more to do in the next game... 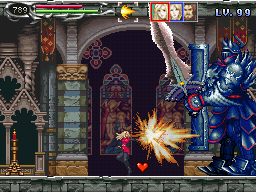 One year after the events of Aria of Sorrow, a new cult of Dracula worshippers had risen up to try and resurrect their Dark Lord, either in the body of Soma cruz or in a couple of other potential host they could find. Yoko, along with the current weilder of the Vampire Killer whip, Julius Belmont met up with Soma near the entrance of the cult's homebase/fortress/demon castle. They advised the young man about the dangers lurking within the evil castle and wished him luck on his journey as they, too, explored the fortress.

Soon after, Soma ran into Yoko and helped lead her to safety after the mosters of the castle proved too strong for her magic. Finding a safe place for her in the Lost Village, Yoko elected to aid Soma in his battles. She taught him how to use the Magic Seals, spells required to defeat the various bosses throughout the fortress (and in no way an excuse to use the DS touchscreen). She also offered aid to Soma by allowing him to use the monster souls he'd collected to upgrade weapons, giving him more powerful equipment to use on his journey.

In the end, after Soma defeated the cult, Yoko joined the rest of the heroes, including Soma and his girlfriend, Mina, as they watched the castle crumble. They all had a laugh at his embarassment at being called on his feelings for Mina, one last good time before the story was closed on this era of Castlevania.

Of course, that's officially what happened. There was an alternate mode in the game, though, that showed what happened if Soma was tempted over to the dark side by the cult, giving into his dark ways and officially becoming the host of Dracula's dark magic (becoming the true Dark Lord). In that version Yoko, along with Alucard, and Julius, went through the castle on a quest to confront Soma and defeat the soul of Dracula. The trio are able to confront Soma and defeat him. Sadly, while Dracula's resurrection is stopped, Soma is killed as well. The heroes depart the castle, relieved the Dark Lord is gone but sad that their friend was lost to the dark magics.

Yoko makes one additional appearance in Harmony of Despair. Shee's one of the downloadable characters in that game, and she plays almost exactly like her appearance in the bonus mode of Dawn of Sorrow.

In her appearance in the bonus mode of Dawn of Sorrow, Yoko is one part of the three-person team set to take on Evil Soma and save the world. Although not as physically strong as her companions, Yoko does bring powerful magics to the table. She has the three classic Belnades spells, Blue Splash (Ice), Holy Flame, and Holy Lightning. She is also able to attack with her Belnades staff (or kicks when she's kneeling), and physically attacking foes generates a small amount of health for her with each attack (helping you to refill on lesser enemies if need be).

Her inclusion in Harmony of Dissonance finds her playing almost exactly the same as in Dawn. She still has access to her three spells, as well as her staff. Sadly her healing ability was removed, making her idea in certain tight situations. She's ends up not being the best spell caster in the game, easily out-classed by Charlotte Aulin when it came to a variety and flexibility of attacks.