In the Castlevania series the spouses and other family of the Belmonts is hardly ever known. The few times we see or hear of them its so they can play damsel in distress for the Belmont to rescue or, worse, so they can be killed to motivate the Belmont on their journey. Rarely do they get portrayed as heroes of any kind in the own right even though, presumable, most of these ladies would have to be strong women to stand up to (and handle) their menfolk.

Although there are shades of damsel in distress to Illyana's story, she does manage to come across as one of the few Belmont ladies with her own agency (probably because she married into the family). Strong of will and full of determination, Illyana views herself an equal to her husband, just as capable on the battlefield and able to handle the dangers of Dracula's lands. Considering the region, and the long history of warrior woman and shield-maidens, its entirely possible she could have been right on this score.

At the very least she doesn't die in her story and that makes her the rare exception in this long series indeed. 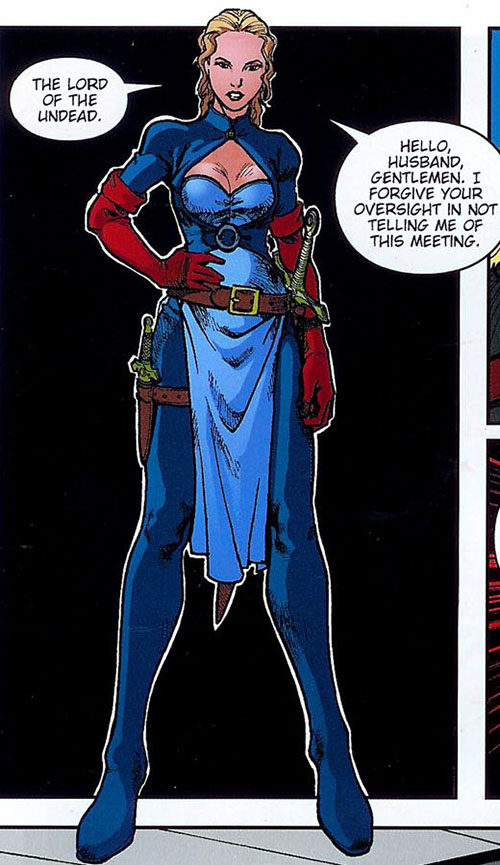 In the comic Castlevania: The Belmont Legacy, Illyana was a pretty noble girl who lives in the village that resides on the Belmont lands. Strong of spirit but fair and kind, Illyana was desired by many in the village, including the nobleman Ivan Bartley, although Ivan's niece, Sona, didn't think highly of the woman. Sona had her eyes on Illyana's betrothed, Christopher Belmont, likely for his power and title, but Christopher only had eyes for Illyana. The two lovebirds were quickly married and set about their life (and love) together.

That changed quickly, though, when an ancient evil returned after 100 years of sleep. The Dark Lord Dracula, had once terrorized the lands of Romania and, with a cult of followers dedicated to their dear master, Dracula soon would walk again. Aided by his human servants, Ivan and Sona, who all too willingly performed the dark acts required to resurrect Dracula, the Dark Prince lived once more. Dracula immediately set about evening the score with his enemies, the Belmont family, and his past defeat at their hands. He attacked the Belmont family crypt, destroying and desecrating the tombs there in an effort to draw out Christopher and get him to do something foolish. When news of this heinous act reached the newlyweds, Christopher immediately began gathering a posse together to head out to the ruins of Castle Dracula.

Initially Illyana sought to go with her husband on th adventure, saying that she was just as strong a fighter and wanted to be at his side rather than at home, worried. Christopher forbade it though, fearing the distraction of keeping her safe (despite her being an accomplished warrior) when the fight with Dracula began. Instead he took other aides and set off on his adventure to Dracula's foul lands. This left Illyana with only a young Romani boy, Viktor (grandson of one of the warriors that went with Christopher) to aid her. Dragging the boy along in her wake, Illyana took her own path into Dracula's realm.

Unfortunately for Illyana and Viktor, the land proved too treacherous and both nearly fell to their deaths when the ruins crumbled beneath them. That was when Dracula arrived, an evil smile on his face. He attacked Viktor, savagely ripping into the boy's throat, draining him of life and turning the lad into a vampire. Viktor was sent to torment Christopher and his team while Dracula grabbed up Illyana, dragging her to a crypt on his lands. There she was chained to a wall while Dracula decided his next steps.

In the crypt Illyana was confronted by a very naked, and very undead, Sona. The woman had given herself to Dracula to be his next bride, but Dracula has cast her aside, turning her but then immediately becoming disgusted by her presences. Sona wanted nothing more than to kill Illyana, but quickly Dracula returned, ready to play with his new toy, Illyana, and make her into his bride. He slit up his chest, pouring out his blood, making Illyana drink from his life so that his darkness would be in her, too.

Thankfully for Illyana, before Dracula could complete whatever ritual he had planned Christopher and his crew arrived. They were able to find the crypt and this distracted Dracula, sending villain against hero in deadly battle. Sona was quickly dispatched as well, as she was no match for the warriors (and barely had any of the power of Dracula). And when Christopher handily took down Dracula, he was able to free his wife so they could go back home together.

Six months later, we find Illyana pregnant, the Belmont lands once more a happy home. But, as we learn, Dracula's foul magic still hung over the couple as the baby within her had a dark connection to Dracula's magic, a connection that... well, would never be explained in the comics because a sequel was never produced.

Although the events of The Belmont Legacy are strictly non-canon, they do coincide with the events of The Castlevania Adventure. In that case, Illyana would be the unnamed woman, presumed wife of Christopher, who would give birth to son Soliel Belmont between The Adventure and sequel Castlevania II: Belmont's Revenge. The demon-spawn baby inside Illyana at story's end would then have probably been Soliel, the same character who is tempted to the darkness by Dracula around his fifteen birthday, setting the sequels events in motion. How that would have played out in the comics is not known, sadly.

Illyana's maiden name, Riktor, is likely a reference to famed Belmont hero, Richter. This would imply that the name, in some form, continued on as a family name passed through the generations.