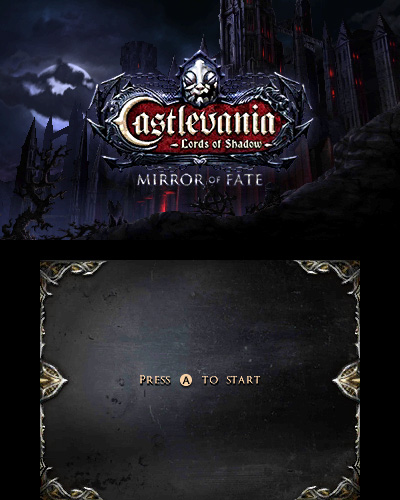 After the success of the series reboot, Castlevania: Lords of Shadow, with that game becoming the best selling game the franchise has ever see, Konami was quick to capitalize on the success and put a sequel into production with Lords of Shadow development house MercurySteam. Interestingly, besides green-lighting a full and proper sequel, what would eventually become Castlevania: Lords of Shadow 2, the company also approved an interquel that interlocked and recontextualized the first game with a new adventure.

This title, Castlevania: Lords of Shadow - Mirror of Fate (titled Kyassuruvuania: Rodo obu Shado - Shukumei no ma Kagami in Japan, which directly translates to the American title) reportedly started life as an HD title meant for modern (at the time) systems. Eventually, though, Konami made the call to have the game come out on the Nintendo 3DS instead of on the main consoles, at least at first, and MercurySteam put in the effort to translate the release for Nintendo's portable architecture. (Of note, it was eventually released on digital store fronts, and packaged with a collector's edition physical release of the first game, on Xbox Live and PlayStation.)

While the original Lords of Shadow was a fully 3D action game, Mirror of Fate (largely) sets its action against the traditional 2D platformer view. In the game players take on a variety of heroes, from an interlude starring Gabriel Belmont (returning from Lords of Shadow), to zones and time periods featuring Trevor Belmont, Simon Belmont, and Alucard, all previous heroes from the mainline series rebooted into new forms in this hand-held sequel title. It's a multi-part, multi-angled game that still feels more like a classic title than the original Lords of Shadow.

The game is largely concerned with Gabriel's fall from grace (which happened at the end of the previous game). Now the vampire lord Dracula, the quest rests with his son, Trevor, to take up the mantel of the Brotherhood of Light and defeat the evil that is spreading across the land. And then it's up to his son, Simon, and a mysterious figure, Alucard, to continue that quest and, hopefully, rid the land of Dracula once and for all (at least until the sequel). Through three time periods and by four heroes, the game spins an arc about Dracula and the titular Mirror, an object that can reveal the past and transport people to histories they need to see.

Although play-wise the game was a return to form for the series, showcasing the action platforming and Metroidvania style hardcore fans desired, the game wasn't a complete success. Many fans (and critics) felt that the game itself was too easy, certainly not anywhere near as difficult as the classic games fans had grown up with. Additionally, splitting the story across three time periods, and moving in and around the first game, created a muddled plot line that didn't really answer as many questions as it raised and seemingly did little to actually add to the story of Lords of Shadow. By introducing versions of the heroes fans remembered, the game played more like fan-service, a salve for those who hated seeing the old continuity going away, but one that didn't really do much with what was given.

Not only was it not as well received by fans as Konami might have hoped, it also didn't do well at retail. The game became one of the worst sellers, at least in its physical presence, only around 160,000 copies, a stark drop off from Lords of Shadow's 1.75 Mil. Even taking into account the shift in hardware from HD consoles to the 3DS, that was still a staggering drop in units. That might explain why the HD version of the game was quickly shoved out later for the other consoles, in hopes of gaining a few more digital unit sales in the process. Overall, though, the damage was done, with the general opinion being that this game had been a failure.

Considering that the previous title in the series didn't come out on Nintendo hardware (Lords of Shadow skipping the WiiU), putting an interquel out on that console probably wasn't the best move. Fans of the previous title that might have enjoyed this game couldn't get it on the console they had, and Nintendo fans were only going to get part of the story on their console, making this a lose-lose prospect. Perhaps releasing it to digital storefronts the first time around would have helped the game find an audience, instead of staggering it out and missing out on potential day-one sales.

On it's own, Mirror of Fate is a fun but shallow title, a flight of fancy for the series before it took it's final bow with Lords of Shadow 2. But perhaps it could have been more, the opening of a series of little interquels that occurred throughout the span of Lords of Shadow and Lords of Shadow 2 had but the series been managed a little better by Konami and MercurySteam.

The Story of Mirror of Fate:

While the idea of bringing Lords of Shadow back to its roots seems like a good idea -- certainly I appreciate that it answers one of my biggest complaints about the first Lords of Shadow -- in execution there's something missing from Mirror of Fate. The game looks like the Castlevania when know and love when you see it in screen shots, but once you actually pick up and play the game you'll notice that something feels... off. It's close, but the beating heart and undead soul is missing from the game, keeping it from truly feeling like a proper part of the franchise.