Although Abaddon first appeared in the Castlevania series in Castlevania: Dawn of Sorrow, his origins are much, much older than that. As with many creatures that have appeared in the series over the years, Abaddon owes his creation to classical mythology, with repeated appearances (in various forms) in the Hebrew Bible and than Christian texts. Generally depicted as a demon or fallen angel with an affinity for locusts (an insect that was quite the plague in those eras), the demon brought destruction with him wherever he went.

Interestingly, the times where the creature wasn't depicted in demonic or angelic form, it was actually considered a place, a deep and dank pit populated by lost souls. This does actually go some way towards explaining his first appearance in the series, with the demon -- a master of locusts who will summon his insects in waves onto the screen, almost like a conductor -- appearing in the Abyss. A demon of locusts guarding the deepest part of a dank pit? That does align with the creature's mythology.

His second appearance in the series seemed to ditch much of the mythology of the character. Acting in Castlevania: Lords of Shadow 2 as a servant of Satan, Abaddon served as an adversary to both Dracula (aka Gabriel Belmont) and the currently leader of the Brotherhood of Light, Victor Belmont. Chasing both men around the city, Abaddon led his army of demons on a charge to make the Earth ready for his Dark Lord. And then Dracula killed him. 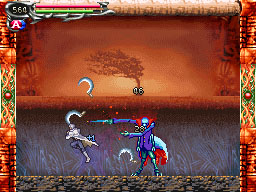 For his first appearance in the series, Abaddon can be found at the deepest part of the Abyss, the very last area of Dawn of Sorrow. Serving as something of a mid-boss (although he is a full-fledged boss encounter), Abaddon tries to prevent your further progress. He's given no story, simply waiting in his boss chamber for you to arrive. He only has two types of attacks, either jumping towards he hero once or summoning his bugs. The summoning will be telegraphed, with the very handsomely dressed demon waving his conductor wand in a specific motion, letting you know how the bugs will arrive: either in a vertical U-shape, in a series of downward L-shapes, or in three lines at rising height across the screen. He's an interesting boss but, due to the way he shows you everything he'll do, not a very scary one at all.

Following that, the Lords of Shadow 2 Abaddon will arrive in his game after the hero has defeated Raisa Volkova (one of two acolytes of Satan in that game). Abaddon breaks free of the Abyss (see the parallel there) and brings his armies to Castlevania City to attack those who oppose Satan. Although the demon chases Dracula and Victor around the city, repeatedly interrupting their tense standoffs, the real battle comes a few scenes later. The confrontation between demon and Dracula begins normal enough (for this set of games). Abaddon has an obvious, glowing yellow weak point on his chest and the player must attack that to damage. While thy do, Abaddon will slash at the player, sometimes getting his claws stuck in the ground. He'll also shoot out gassy bodies from his back which will crash into the ground (and become damned soul enemies to fight), and he'll spray a gassy breath out at the player.

Once you do that enough to get him down by a quarter of his health, he'll get angry, close up his weak point, and then chase after the hero, slashing at them. The cycle repeats again, with Abaddon going through his basic moves. That said, he will also add on a stomp that creates a radial shock wave to avoid, and he can charge up and slash at the ground to send a powerful shock wave directly at the player. This process will repeat until, finally, the boss's health bar is depleted. Then the player will have to sit through a finishing cut-scene, with QTE button presses, to kill the beast for good (with failure refilling some of it's health to draw it out even longer). It's not a hard boss, just a tad time consuming.