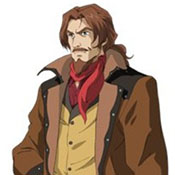 Although the various games to follow up Symphony of the Night largely followed up that games formula (large, freely explorable castle with powers and items to find). Few of the games, though, did it as well Aria of Sorrow. One of the best dynamics of that game was the interactions between Soma Cruz and Julius Belmont. As the game progressed, and the various secrets were revealed, the game showed an inverted dynamic from the usual Castlevania game -- the hero was, of all people, Dracula himself while one of his antagonists ended up being a Belmont.

Of course, to call Julius an antagonist implies he was a bad guy, but that's only the common definition of the term. An antogonist is someone that causes change in the protagonist and, in that regard, Julius fits the bill. It's through his own quest to stop the dark magics in the castle that he helps Soma find is own true self and become someone that can overcome the darkness within.

That said, he had a very enjoyable side quest not only in the first game but also the sequel. The journey of Soma Cruz was central to the games, but Julius added a depth and gravitas to the games that helped elevate the plot and create lasting classics in the series.

Prior to Castlevania: Air of Sorrow: Dracula's Final Defeat

As alluded to in the opening of Aria of Sorrow (and the cutscenes to follow later), Julius Belmont was one of many heroes (along with Genya Arikado/Alucard and representatives of the Belnades clan) who joined together to try to end Dracula once and for all. On the eve of the vampire lord's resurrection, these people came together and performed a ritual that not only destroyed Dracula but also seemingly sealed his magic (and his castle) away in an eclipse (try not to think to hard on that last detail). Sadly. Julius was was caught by the magic, knocking out his memory and leaving him with no knowledge of what happened or who he was...

Although this event is of huge consequence to the Castlevania timeline, Konami never actually made a game set in 1999 AD. Although we can kind of understand why -- the release of Aria of Sorrow does make it so we don't need to see this event in action to know it happened -- it's still a tad surprising. In this day and age of companies making DLC for any character they can think of, bonus quests for some side character to view a story from their perspective, one would think Konami would have released an Ultimate Edition of the game featuring Julius's quest through the castle. But that was never meant to be. 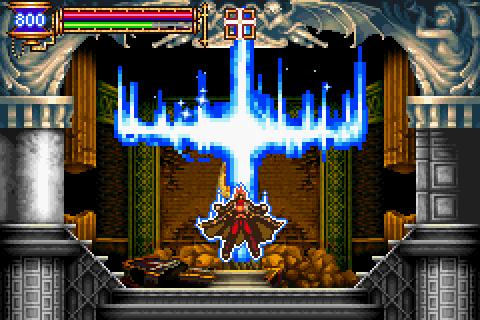 36 years after Dracula was defeated and his magic was sealed away, a young man, Soma Cruz, has come to Dracula's castle. Not sure how he got there or what's going on, he explores the castle looking for answers. At the same time that he's wandering the demonic halls, another man is on his own quest for answers. Calling himself J, this man has no memory of who he is or why he's come to the castle, he just knows it's important for him to figure out these answers quickly.

As it turned out, J was, in fact, Julius. Left without a memory for all this time (and having aged quite gracefully in the interim), J returned to the castle our of some sense that he was needed there. It's only through his explorations in the castle, and his repeated meetings with Soma, that Julius figured out who he was and what he had to do: he, the current heir to the Belmont clan, had to find Dracula and defeat him once more. The only problem with that plan was that Soma Cruz was a actually Dracula all along. Soma was the reincarnated spirit of Dracula, which was why that young man had been drawn to the castle during it's reappearance.

Whatever kind feelings he may have had for Soma, Julius knew he had one mission. Even though he didn't want to kill the kid, Julius fought him. Soma, though, proved the better man and better warrior; although he defeated Julius in combat he did not kill the man. Instead he left the vampire hunter live and, though Julius's advice, went on to seal the magic of Dracula's castle away once more. The world was safe once more, ironically through the teamup of a Belmont and the soul of the Dark Lord himself.

As is expected in a Metroidvania game, there were a couple of bonus modes in Aria of Sorrow. The first was an adventure mode for Julius (called, naturally "Julius Mode"). Here he got to explore the castle (not unlike Richter Belmont in Sympony of the Night). This mode didn't have any cutscenes and Julius didn't gain any special abilities along the way, but it was a fun way to explore the castle a second time around. Julius was also made available for use in the game's Boss Rush mode, giving players plenty of time to play as the Belmont.

It was one year after the events that gave Julius back his memory when another castle (not Dracula's castle but a fortress constructed by a dark cult lead by Celia Fortner) drew our vampire hunter out of retirement. The cultists wanted to resurrect Dracula in a willing host (so, not Soma), and had to potential lads willing to act as his new body. Julius knew he had to stop them no matter what so he went to the castle (as any Belmont would).

At a village on the outskirts of the castle, Julius met up with Yoko Belnades (who had been among the heroes at Dracula's castle the year prior) and Soma Cruz. Realizing that the young man could give in to his dark powers if he entered the castle, Julius tried to get Soma to leave. Seeing that the boy was determined to enter regardless, Julius let the boy go on his own but swore that he'd keep an eye on him.

As each man explored the castle they repeatedly ran in to one another. Once was in front a barrier that lead deeper into the castle. The barrier was made of powerful dark magics and Soma had no way to cross it. Julius knew he could destroy the barrier but it would drain his powers. Instead he told the lad to explore elsewhere -- nothing good would come of going too deep into the castle.

Later, Soma ran into Julius and Genya Arikado (who just kept showing up in these castles). Julius and Arikado were there to confront Celia and end her attempts at resurrecting Dracula. They bear witness to Celia sealing a demon to the soul of a potential Dracula surrogate, Dario. The two villains flee and while Arikado went off to find Celia, Julius pursed Dario. He did apparently catch up with the lad (although we don't see this scene in game, just hear about it afterwards) and while the two fought repeatedly, Julius didn't have any way to finish off the foe (as this game required the use of Magic Seals to bind bosses and Julius didn't have access to these artifacts). This left Soma to find a way to defeat Dario while Julius would go find some other way to seal the powers of the castle forever.

It was near the end of the adventure that Julius once again appeared. Heand Arikado were once again guarding the dark barrier that barred entrance to the depest parts of the castle. Soma needed access to this area, though, so Arikado urged Julius to use his power to break the magics. This action drained Julius of his power, leaving him unable to continue the fight. He could only watch as Soma ventured off to defeat the cultists and save the day once more.

In the end, though, all was safe with the world. Soma came through a second time and all the heroes, including Julius, safely escaped the castle sure in the knowledge that Dracula's power would never be unleashed on an unsuspecting world.

As with Aria, Dawn of Sorrow has alternate endings and story modes. The bad ending on the game has an interesting consequence: Soma goes bad, becoming Dracula, and it's up to Julius to save the day. Unlike in other games in the series up until now, this mode actually does have it's own story and cutscenes. Within we watch as Julius takes up his whip and joines forces with Yoko Belnades and Genya Arikado to explore the castle and fight Soma (acting as the newly resurrected Dracula). If sucessful, the three are seen outside the castle lamenting the death of their friend (Soma) while at the same time relieved that Dracula is once again defeated.

This mode had been praised by many for not only it's "What If" storyline but also its mechanics. Although referred to once again as "Julius Mode" it's really a three hero mode more akin to Castlevania III: Dracula's Curse. Here, Julius is the Trevor Belmont stand-in, fighting with his whip and classic sub-weapons. He can then switch off to Yoko Belnades (in place of Sypha) and Alucard (as Alucard, of course) at any time to use their exploration abilities and attack powers. It's great mode with a lot of depth (and, in the mind of the editors of this site, in some ways even better than the main mode of the game).

Julius appears in Harmony of Despair as one of downloadable characters for the Xbox 360 edition of the game (but was included in the full version for the Playstation 3). He joined a fair roster of whip-weilders in that game, but his inclusion felt right considering that Soma was also packaged in as well.

Both as a playable character, and as an enemy to fight, in Aria of Sorrow, Julius showed a lot of raw power. He was fast and agile but could hit like a truck, making him dangerous to anyone that had to tussle with him (including the players controlling Soma). He could use a small selection of subweapons (boomerang-like cross, holy water, axe, and the powerful grand cross) as well as a high-jump/uppercut and a teleport slide.

Returning for Dawn of Sorrow, Julius was not an enemy the player had to fight. Instead, Julius really came in to play for that game's "Julius Mode". He returns with his whip and sub-weapons, although his high-jump was removed (he could still uppercut, but the explorational benefits of the high-jump were given to Alucard and his bat powers so as to encourage the players to use all three characters). He also lost his teleport slide, instead just getting a more basic slide instead.

Harmony of Dissonance, though, saw Julius return in prime form. Armed with an improved selection of subweapons (adding the knife, ricochet rock, bible, and javelin to the mix, as well as all the retro subweapons included as DLC, but losing the grand cross as a subweapon) and a return of his high jump and teleport slide, Julius also gained a few tricks from Simon Belmont. Namely, Julius could now whip in all directions and grapple onto certain spots with his whip. He was powerful, agile, and a great character in the game.

Although not mentioned in the main series, Julius apparently had a sister (or maybe a daughter -- their relationship is not made entirely clear). Well, okay, as far as the Konami expanded universe was concerned, Julius had a close female relation, but that's only if we count the various parody games the company liked to produce. Featured in Otomedius Excellent (a spin-off of the Gradius/Parodius scrolling shooter games), Kokoro Belmont was the younger sister (or daughter) of Julius who took up the whip to help defend Earth against the Bacterians. While Konami did make this game, we doubt anyone would consider this connection official continuity.