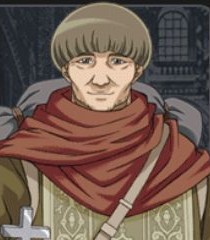 Every game in the later part of the Castlevania series needs a shop. That's just how the series has evolved at this point, with the Metroidvania aspects supplemented by an RPG system and all the frills. A shopkeeper is just part of that scope, and almost every game since Castlevania: Symphony of the Night has included one.

For late-DS entry Castlevania: Portrait of Ruin, the task of shopkeep to the heroes fell to Vincent Dorin, a bumbling priest who ends up at Castle Dracula. Vincent, in his own way, resembles Charlie Vincent, bedecked as his is in holy gear, stumbling his way through the castle. And, like that previous hero, Vincent here was ready to aid them in any way he could... although this time for a price.

While in-game Vincent Dorin isn't an exciting character, it is interesting to see the series revisit the concept of Charlie Vincent in this new form. Their looks are the same, their intent largely the same, and they even share the name of "Vincent" between them. While Charlie's game, Castlevania 64 isn't part of the main continuity anymore, it is nice to see nods like this in the later, canonical, entries. 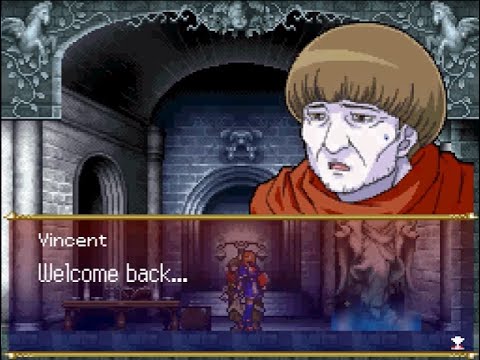 A bumbling priest drawn to the castle, Vincent wants nothing more than to see the evil in the castle (Dracula or otherwise), defeated. When our heroes, Johnathan Morris and Charlotte Aulin, first encounter the priest outside the castle, he notes that he had heard of the two of them before -- the protector of the famed Vampire Killer and his powerful sorceress friend being famous in certain circles -- and he decides to aid them as they're likely able to defeat the evil of the castle.

Hiding out in the early entrance area, Vincent sets up shop, providing aid and succor to the heroes... for a price, of course. He doesn't leave his area, instead enjoying the protection of his out of the way nook. It doesn't keep him entirely safe, though as, late in the adventure (after the heroes defeat Death, Vincent is attacked and bitten by vampires. Sensing the growing curse within the priest, the heroes lend him aid, curing him over the disease and saving his soul.

He then goes back to selling items to the heroes, thankful for their assistance (although any promise to lower his prices if he was cured are quickly forgotten).

You don't have to cure Vincent if you don't want to. Saving him or not only changes what he looks like in the game and there's no later boss fight you have to have against the vampiric Vincent. It's really just for show. But you can attack him while he's a vampire, which causes him to eventually run away, and that's pretty funny. He'll return though next time you enter the shop, so there really isn't a penalty either way.

Vincent is an even more minor character in the first Lords of Shadow game. As hero Gabriel Belmont (assisted at this point by Zobek) enter Wygol Village, they find a town ransacked by vampires. The priest, who was supposed to act as the protector for the village, instead locked himself away in the abbey, hiding from the monsters that attacked the town. This despite having a powerful relic, Holy Water, that could have defeated the monsters and saved the town. Gabriel and Zobek break into the abbey, confronting the priest, before taking the holy water and leaving. In the background they hear Vincent babbling and praying before, eventually, the vampires come for him, too.