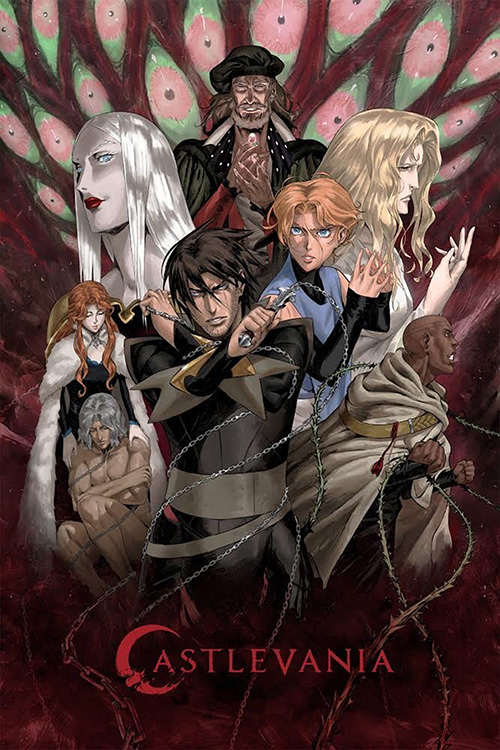 As I know I've mentioned before, I'm not a big fan of anime. That said, I am a gigantic fan of Castlevania (not that I have anything to prove on that point, all things considered). The Netflix Castlevania TV show was always a weird fit for me, then, because it's very anime but also very Castlevania, a blending that took a little while for me to enjoy. But then, it took a while for the show to find it's feet, with a rough but interesting first season followed up by a much improved, and vastly more enjoyable, second outing. Even for someone like me that really doesn't care much for anime, I had to admit that the Castlevania series was hooking me in.

Now in its third season, the question every fan had was, "where can the show go from here?" Dracula had just died at the end of the previous season, at the hands of heroes Trevor, Sypha, and Alucard (sorry, Grant, but you're still a no-show), and after that the heroes had parted ways, safe in the knowledge their job was done. Sure, the games followed Trevor up with Chris and then Simon, but the show seemed dedicated to exploring a post-Dracula world while still following our three heroes around. So, what story was left to tell in this new, different timeline for the series?

The show answers this by giving us four divergent storylines for its third season, all focusing on different characters from the previous season. Trevor and Sypha have gone off to find the read of the Speakers, Sypha's tribe of oral historians. They get waylaid at a town, though, dealing with a group of mad monks and whatever evil plans they have in store (that may eventually lead to the resurrection of Dracula, because of course he eventually has to come back since this is Castlevania). Alucard remained behind at the castle (which, if you will recall, now sits atop the great Belmont archive), guarding it from anyone that would seek to misuse Dracula's power (or the secrets of the Belmont clan). His reverie is interrupted, though, when two Japanese warriors -- Taka (Toru Uchikado) and Sumi (Rila Fukushima) -- show up at the castle asking to be trained in the means to hunt vampires, a request Alucard soon grants (even if things won't end well for this trio).

Meanwhile, in a plot line very loosely inspired by Curse of Darkness, the other half of the show follows the stories of Hector and Isaac. Hector, a Devil Foregmaster, was captured by Carmilla at the end of the last season and dragged across the continent to her home castle (Castle Karnstein, maybe?). There he's imprisoned until he agrees to work for Carmilla and her three vampire sisters -- Lenore, Morana, and Striga -- and make them an army of devils so they can conquer their part of Europe. Meanwhile, Isaac, who once was Hector's friend and forge-partner, is on a quest to track down Hector and get his revenge on the man after Hector betrayed everyone and tried to aid the heroes in the overthrow of Dracula (a plan that, in a way, did work). Isaac, feeling betrayed, has all kinds of things planned... once he finally catches up to Hector. 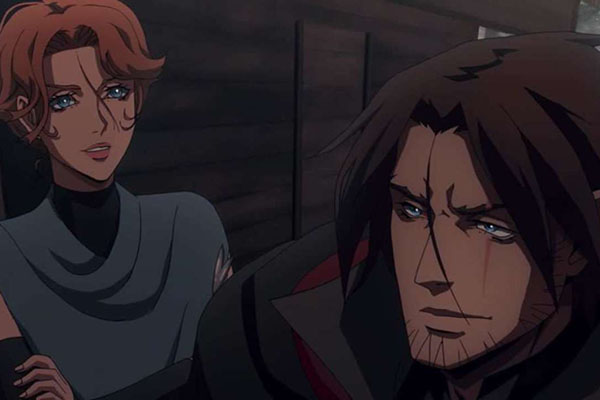 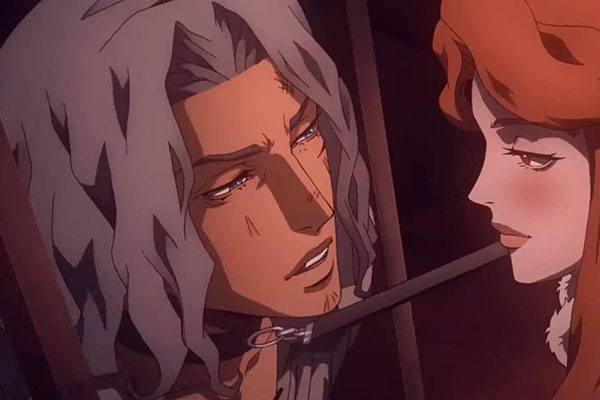 After the highs of last season fans had very big expectations for the third season of Castlevania. We all were curious, of course, to see where this season would go. Once it was announced it would be a direct follow up to the previous season, continuing that storyline (sorry Chris and Simon), we really just wanted to know where the series could go. Already the show had diverged far enough that a direct adaptation of Curse of Darkness seemed out (at least for now). I don't think anyone expected the storylines we got, though.

I don't want to make it sound like the storytelling in this season of the show was bad, per se. The problem with it (and the reason I think a lot of fans are complaining that this season just isn't as good) is that this season, despite being increased to 10 episodes this time around, doesn't actually go anywhere. Oh, a lot of the characters are moved forward on their paths but none of the storylines actually connect and there is no big confrontation between all the forces at play to unify the ideas at play. I'm sure that will come in the fourth season (whenever Netflix inevitably green-lights it), but for now we're left waiting for the other shoe to drop.

Some of the storylines are more interesting than others and these are the ones that help to drive the show forward, that's for sure. Trevor and Sypha get the best story of the set, focused on a town plagued by darkness. Their dealings in the town -- with the mayor who seems outwardly nice but is clearly hiding something, the monks that are obviously up to no good, and the mysterious stranger Saint Germain who seems to come from another time and place -- all build to a grand confrontation between themselves and a horde of demons that, in the process, are trying to open their own gateway to Hell to bring back Dracula. This section is compelling, action-packed, and enjoyable. Plus, it promises big things for the series moving forward.

Meanwhile, over in Eastern Europe, the interplay between Hector and Carmilla's sister, Lenore, makes for interesting person conflicts even if there isn't much action. It works, though, because these characters are compellingly written. Or, really, I should say that Lenore, the "youngest" sister of the quartet (it's hard to tell if she's really the youngest when we're talking about immortal beings), is the most interesting. She's explored in this season, given depth and substance, more so than her sisters (and that includes Carmilla), and her plots and schemes make for the most interesting part of this storyline. 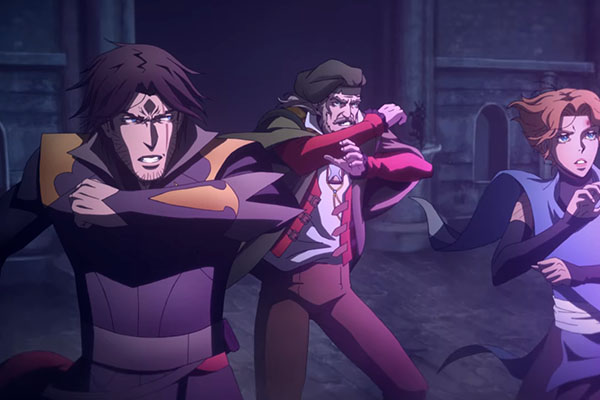 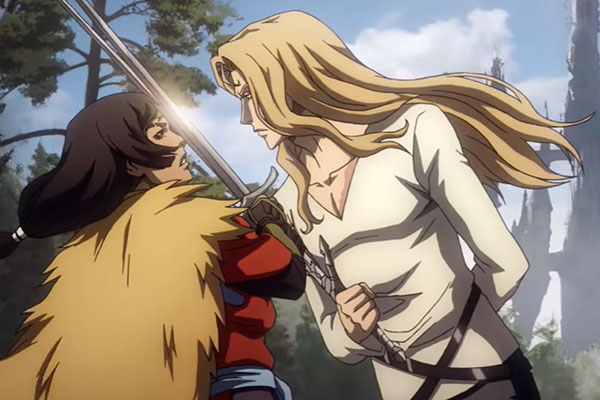 Where the show really falls apart is with the other two leads, Alucard and Isaac. The show uses Alucard's storyline to try and build up his character, to make him more than a silent protagonist who hates his undead nature. The two new characters, Sumi and Taka, seem designed to give Alucard a new purpose in life. The problem is that, pretty obviously from the beginning, these two new characters are up to something and, when it's all finally revealed it wipes away all the work the show did with Alucard, resetting him back to zero. It's not a great place to leave the character after ten episodes and makes it feel like his whole storyline was wheel-spinning so the vampire can wait for his father to come back and fight him again.

Isaac isn't much better, but only because there's so little character here to begin with. He's the evil Devil Forgemaster and whatever the show tries to show us about his "growth" he remains the evil one. His journey takes him from place to place where he meets mortals who act like dicks to him, so he kills them (or feeds them to his horde of monsters). Sure, his storyline builds to a confrontation where he takes on a wizard even more evil than Isaac, but that's not growth (even if it does lead to a pretty cool battle where Isaac takes on the show's version of Legion). Isaac remains a character shrouded in his own evil, someone with cool powers that, nonetheless, we don't care about in the least.

I didn't hate the third season of the show, I just wish it built to something more. Clearly this season acts as a kind of "chapter one" that will then be followed up (and concluded) in the "chapter two" that is Season Four. It just leaves all the narrative momentum with nowhere to go, a lot of build up but almost no release. We want to see Hector free himself from the vampires and then take on Isaac. We want to see Trevor and Sypha take on Dracula again, presumably with Alucard at their side. Right now, though, all of those ideas are just promises for a season yet to come. We don't have that story yet so we're stuck waiting, unfulfilled.

Season three of the show does have its pleasures -- good action, art that continues to be great, and fun interactions between various characters (Trevor and Sypha have such a solid dynamic this time around). What it's lacking is its purpose, a final event to unify itself and bring it all together. If and when the fourth season comes out we'll probably view season three as a great part of the overall saga. For now that, we're left wanting.