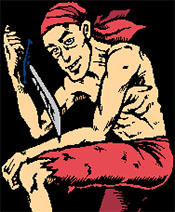 Though the first few games in the series (home systems, handhelds, and arcade alike) concerned themselves with just a single hero taking on Dracula -- namely a hero of Belmont persuasion -- there was more than one hero allowed in Romania at a time. The release of Castlevania III: Dracula's Curse showed that there were plenty of willing and able heroes in Romania willing to take up their preferred weapon to take on the forces of darkness. And many of these heroes (and their clans) showed up repeatedly throughout the series afterward.

Although the DaNasty clan ha only ever had one entrant in the series, Grant, he has proven to have a lasting effect on the series as a whole -- aided in this fact, probably, by being in one of the most revered games in the series. In fact, Grant stands alone in many respects: the only one of his clan in the series, the only character to play in any way, shape or form like he does, and the only pirate (winning out against ninjas, of which there are zero heroic ones in the series). That's quite an accomplishment.

Still, it seems interesting that for all the times Alucard has come back time and again (and again, and again), and for the number of Belnades heroines in the series, there hasn't been another DaNasty is the series at all -- not once (officially, although Hammer almost got to be one). Maybe it's the name -- the name is kinda dumb.

When Dracula began (or returned to, if you follow the events of Castlevania Legends) ravaging the countryside with his armies of darkness (not to be confused with the Army of Darkness, which was handled by Ash Williams), many brave and noble souls stepped forth to try and defeat the vampire lord. One among them was Grant DaNasty, a brave and noble rogue who had sworn vengeance against Dracula for the dark lord's hand in the death of DaNasty's entire family. Sadly, his attempt to infiltrate the demon lord's castle was met with failure -- instead of defeating the vampire, Grant was instead possessed with the vampire's demonic power and brought into the fold as one of the vampire's soldiers.

Not long after, Trevor Belmont came to Dracula's lands to try his hand at defeating the dark lord. While scaling the first of the towers that made up Dracula's immense fortress, Trevor came across Grant's demonic form. The two battled, but instead of killing the poor creature, Trevor managed to banish the foul magic possessing it. Grant DaNasty was freed and he willing joined with Trevor on his quest against Dracula.

Together, with the aid of the sorceress Sypha Belnades and the vampire lord Alucard, Grant and Trevor were able to make it to Dracula's throne room and take on the vampire. Though the battle was tough, the vampire was defeated. With the rest of his companions, Grant watched the castle crumble into the sea, confident that, for a time, the land was free of Dracula's dark magic.

To note, Castlevania III: Dracula's Curse did receive one remake, a cellphone-only edition. From what we can find, the game was largely the same as the original, just modified to work on mobile devices.

After their successful defeat of Dracula, the various heroes went their separate ways -- Trevor and Sypha were married, Alucard went to his grave to try and keep Dracula's power from spreading across the land, and Grant back to the towns of Romania to aid in their rebuilding. Grant's decision to move on was motivated in part for very personal reasons -- he was secretly in love with Sypha and resented Trevor for taking the sorceress's hand in marriage.

Despite this, Grant was willing to join with his fellow heroes when a dimensional rift was opened by the mystical traveler, Aeon. In the far future, Galamoth (evil villain and rival to Dracula) looked to defeat Dracula in the past and change history so that Galamonth came out on top. Sensing the kind of damage this could do to history (i.e., a lot), Aeon brought heroes and villains together in the rift in hopes that he could find one among them with the power and skill to stop Galamoth's plans... by pitting them against each other in combat (via a fighting tournament, naturally).

In the battle, Grant stood firm, taking on all the foes put before him, aiding in the great battle through skill and cunning. He really was a hero up to the task of taking on Galamoth and the evil lord's minions. After the tournament, Grant went back to aiding the towns of Romania, choosing to stay far away from the heroes he once called his friends.

(Of course, since it was a fighting game any one of the heroes, or villains, could have proved victorious -- the exact hero to end Galamoth's plans was never determined by Konami, so it's up in the air now if Trevor officially cast the fatal blow or not.)

Officially, in Castlevania: Symphony of the Night, Alucard has to face off against three zombies in the Inverted Coliseum -- three zombies that look like his old friends (from Castlevania III): Trevor Belmont, Sypha Belnades, and Grant DaNasty. This is a nice nod to the previous title, but this isn't considered an official reappearance of Grant (or the other two) since these are just zombie look a-likes.

Similarly, in Castlevania: Portrait of Ruin, the Zombie Trio make a second appearance, this time in the Nest of Evil. That area serves as a kind of "best of" for various Castlevania bosses from the Metroidvania era of the series. They don't serve any specific plot points here and, as before, these are just zombie look a-likes and not the real characters brought back to life.

Finally, a small nod towards Grant is made in Lords of Shadows - Mirror of Fate. Although Grant has no official analog in the series (unlike Trevor, Alucard, and Sypha), in the clock tower section of Mirror the body of a slain knight of the Brotherhood can be found. His has a scroll telling his tale: that he, of the clan DaNasty, swore vengeance against Dracula for the deaths of his entire family. Although the knight does not have a first name, it can be assumed that this wa a way to fit Grant in among all the other mirror-versions of his companions.

Although Grant doesn't show up in the Castlevania Netflix adaptation, a similar character, Greta of Danesti, does appear. Although likely not intended as a one-to-one analogue for Grant (certainly the producers say she isn't), there are enough similarities between the characters, and the space they fill in the series, that they could be considered parallels, for sure.

Grant is one of the most maneuverable heroes in the series, especially considering that he starred in an NES game. Having the ability to scale along walls and ceilings, Grant can get to a number of places no other hero can manage, at time breaking the game in ways the developers probably didn't intend. This can keep players safe against a number of foes, in many ways making the game easier (especially for beginning players). Make no mistake, Castlevania III is a hard game, and any edge players can get, like playing as Grant, is highly valuable.

Sadly, despite his maneuverability, Grant is not a very strong character. His primary attack, the knife, is both weaker than Trevor's whip and lacks the range to boot. Plus, while he can use sub-weapons, he's limited to just the axe, dagger, and stop watch, leaving him without the ability to get the more powerful cross or holy water. Playing as Grant may be good for tight platforming situations, but players will frequently have to switch to Trevor for the harder battles they'll face.

It is interesting to note that the Fake Grant in the Zombie Trio controls not like his playable form but his demonic boss variant from Castlevania III. This is probably, in part, to make him a more fearsome foe, especially considering that by the time you get to the Zombie Trio, Alucard has become a walking tank that barely feels any damage at all.

Despite being included as one of the Zombie Trio, though, Grant was shut out of the party but the time "Julius Mode" from the DS Castlevania, Dawn of Sorrow, rolled around. While the other heroes had counterparts (Julius and Trevor, Yoko and Sypha, Alucard again), Grant had no analog. Audio clips hidden in the game seem to indicate Hammer, a shopkeep in the game, was to be playable, presumably as the Grant for the team up, but was most likely cut for time.

Grant receives a pretty massive makeover, stylistically, in Castlevania: Judgment. Like his NES counterpart, though, Grant is a fast, agile fighter. If anything, he benefited from more speed and power than he ever exhibited in his NES title, able to launch and juggle characters with great ease. Although not necessarily the easiest fight to get a handle on, Grant could prove formidable in the right hands.