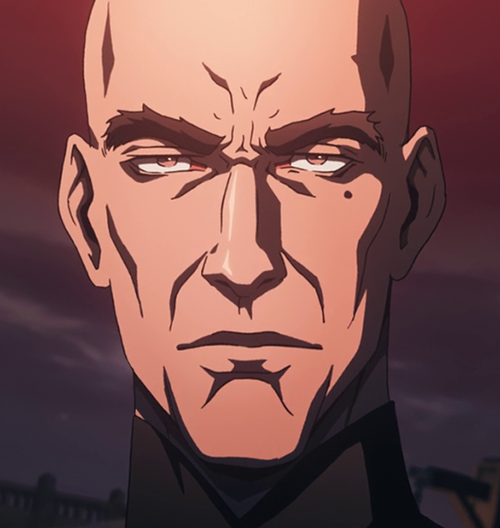 The Castlevania series has been around long enough that it has developed its own shorthand, its own tropes. The heroes are obviously heroes, the villains are villains, and you don't often get good guys going bad unless, plainly, they're really doing it for good reasons. It's easy to pick out the monsters in a series absolutely chock full of them. Rarer are the monsters that don't look like monsters at all.

The Judge is a character introduced in the third season of the Castlevania anime and, as far as we can tell, he's actually a good guy. His whole arc in the season is how he only has, "the best intentions for his town." He knows every inch of his town and he only has a few rules that are meant to keep the people happy and healthy. From all we can tell, they certainly seem to thrive under his rule as their only complaints stem from either the Night Creatures outside the town, that the Judge and his soldiers keep at bay, or from the priory within the town walls and the monk there that have gone a little... off recently.

The point of the Judge is to highlight that there are "good men" in the world of Castlevania, that not everyone is corrupted by power, absolutely. Except that really isn't the case, as is revealed late in the season, when it comes out that the Judge was, secretly, a serial killer, murdering (through his own little traps) any children in town that caught his ire (usually for running, or playing, or being loud). They'd die and he'd keep little trophies to remember them.

When this revelation comes out the heroes, naturally, are horrified. There's a moral lesson based around the Judge, that of whether good men are truly good, or if bad men are really, truly bad. Are the good works that the Judge carried out for the town washed away by the evil he perpetrated? Nothing in the world is black and white, something that is thrown into sharp contrast for our heroes who have easily followed a path that strictly segmented "good" and "evil" into their own zones. 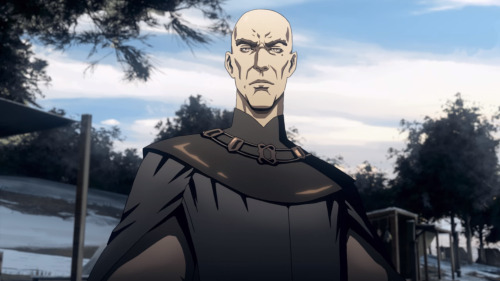 Our heroes, Trevor Belmont and Sypha Belnades, first meet the Judge (voiced by Jason Isaacs) when they came into the town of Lindenfeld having just defeated a pack of Night Creatures outside the town's walls. The townspeople viewed the two warriors as true heroes, welcoming them into their town. And the Judge, seeing the power of this duo, granted them respect, as well as leeway around the town. Of course he did also have his own use for them.

As it so happened, there was a group of monks living in the priory on the outskirts of town and these monks, led by Prior Sala, were clearly up to nefarious deeds. Months before a hulking Night Creature (known simply as the Visitor) had come into town and the monks had been the first to get to it. They'd secreted it away and, soon after, started going around in robes with a new "holy" symbol on it. This symbol, as Sypha later informed the Judge, was actually the alchemical symbol for "Hell", and it was clear that these monks, and Prior Sala, had been influenced by the Night Creature, becoming its willing minions.

Soon after the heroes arrived the Judge began noticing the monks going around town, acting shady (or, really, shadier than normal). Alchemical marks were found etched onto a number of buildings and, as Sypha informed the group, those symbols meant "change". Whatever the monks were up to, it spelled bad news for the town, a situations that had the Judge worried enough he called together his guards so they could attack the priory.

Unfortunately, before the siege could begin the monks launched their own plan. The Alchemical symbols burned to life, incinerating the families around town in their homes, sending their souls to the Night Creature that was still very much alive and lurking in the crypt of the priory. The Judge and his men attacked, fighting the monks as they guarded their domain; the heroes, meanwhile, found their own path into the building to take on the demon within.

Once Sala realized what the Night Creature had made him, and his men, perform, he fled the priory but ran right into the Judge. The two men fought, and out of desperation Sala pulled a knife out, stabbing and mortally wounding the Judge. The Judge sank to his knees, bleeding, but as he lay there he let Sala know, supposedly as an act of mercy, of a secret path out of town that would let him escape undetected. This path ran through the woods, a path the Judge has sent a child down earlier in the day. It seemed safe enough.

Later, once the demon beneath the priory was killed, Trevor and Sypha came out to find the Judge was dying. They were unable to help him with his wounds, but he asked them to burn his house without looking inside, a little act of mercy for himself. He also told them about the path he'd sent Sala down, saying that it "dealt" with Sala. Trevor and Sypha followed the path only to find Sala dead in a hidden spike pit that lay on the path. That was bad enough, but they also found other dead in the pit, old bones, many of them from small children, that lined the pit.

Going to the Judge's house, they went inside and found something truly depraved: a room of trophies taken from all of the Judge's victims, and there were many, most of them from children. This ghastly discovery turned the stomachs of Trevor and Sypha. They burned down the house to rid the world of the Judge's evil, but they realized there was no way to truly remove the taint of evil from this world, not when even "good" men could have such evil lurking within.