Although the Castlevania series draws many monsters in from various sources of pop-culture and mythology, few creatures are pulled from actual science. Beasts of the heavens, beasts from Hades, any any other plane of existence are expected, but a monster from the very past of Earth is much rarer indeed. And yet, that was the seeming source for the monster Gergoth, a beast most assume is meant to be an old, undead dinosaur (of some indeterminate kind).

The key identifying feature of Gergoth is its rot. It's a dead and half-dessicated thing, with loose skin that pulls from its jaw, eyes gone completely to rot, its tail half-ripped away, and its ribs completely exposed. If it once had upper limbs those were lost long ago. it vaguely resembles a T-Rex or Raptor, only undead and magically powered. It makes for a very interesting boss, indeed, especially within the context of the boss chambers the beast could be found lurking within.

Gergoth has appeared in a number of games in the series, starting with its original debut in Castlevania: Dawn of Sorrow. Since then the monster has maintained its form and design (unlike Castlevania: Aria of Sorrow creation Balore), making it one of the most consistent monsters in the series. It's also a fan-favorite, which explains why the beast was even featured in the fourth season of the Netflix Castlevania anime, acting as a siege engine for the bad guys in the climactic last run of episodes that season. 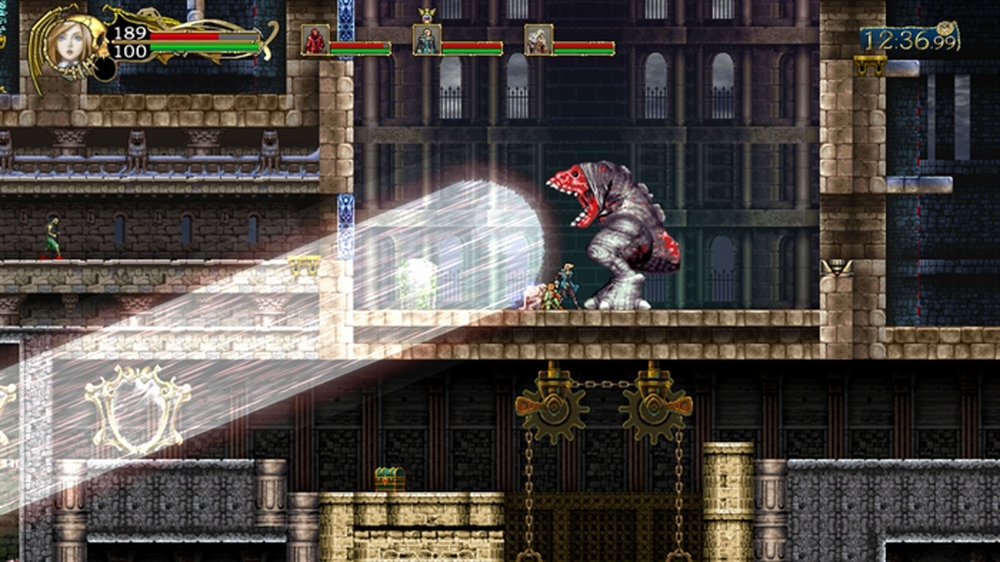 In its first appearance in the series, in Castlevania: Dawn of Sorrow, Gergoth acts as the guardian of the Condemned Tower. It has a set of attacks it can perform: it can bite at the hero, or it can unleash a cloud of gas that will cause status ailment against the hero, and it can unleash a powerful laser that will cover the arena in a wide arc (although it can be dodged by getting up close to Gergoth and kneeling). After attacking it also has a chance to jump ad change to the other side of the arena. Once enough damage is dealt, the beast will let out a roar and then jump way up, causing the floor to give out when it lands. This will plunge Gergoth, and the heroes, down the whole of the tower. Once it lands i will get its face wedged in the ground for a short time (making it an ideal time to attack the monster) and then it will free itself. When it's shackles break the battle is nearing its end.

When it reappeared in Castlevania: Portrait of Ruin, Gergoth maintained most of its attacks. Patrolling as the second boss in the Nest of Evil, Gergoth could be met in battle, and it will bite and gas and laser at the heroes. Of note, though, is that the beast isn't in a tower and it won't cause this show-stopping moment of destruction like it could in Dawn of Sorrow. Defeating Gergoth will also unlock the Wind Quest to have Charlotte defeat Gergoth with the Blank Book. Only the finishing blow has to be dealt with this tome, so just deal a ton of damage up front before Charlotte goes in for the kill.

Gergoth then came back in Castlevania: Harmony of Despair where it had a similar set of attacks. As the heroes made their way to the boss, the guardian of the first stage of the game, they would find that every 30 seconds Gergoth would wake up and fire its laser beam across the stage, forcing the heroes to dodge quick. Once they made it to the final chamber they'd be in for a similar fight once again: bites, gad clouds, and lasers, although Gergoth also added in a slide-tackle to its repertoire. As the whole center of the castle was one long tower, Gergoth obviously was going to unleash his big smash attack once again, making for a very dynamic, and interesting, stage to experience.

We get another return of Gergoth (or "Gergos" as he's called here) for Castlevania: Grimoire of Souls. Here he's the guardian of the ninth chapter of the game and awaits in the Eternal Imprisonment section. Most of his attacks are what you've already seen from his Dawn of Sorrow in carnation, so if you're familiar with that fight (detailed above) you'll be good here. There are just a couple of differences. For starters, the room is bigger, so he gets the ability to walk, jump, and dash around it, making his attacks a little more varied. Also, if you lay on enough hits quickly you can sometimes stun the old dinosaur, forcing it to fall over and recover. This grants you plenty of time to lay on some extra damage. Overall, though, this is not a hard fight.

Of note, it is possible that the Gergoth wasn't meant to be a dinosaur but was, instead, meant to be a reference to Fafnir, the dragon slain by Sigurd in Norse mythology. In the graphical code for Dawn of Sorrow Gergoth has the tag of "f_fafni_0#.dat", and "fafni" could have been meant as Fafnir. This is only supposition, of course.

Meanwhile, a similar monster to Gergoth is featured in Castlevania: Lords of Shadow - Mirror of Fate. Named the Executioner, this monster looks a lot like Gergoth if you dressed it up in a robe and gave it a weapon. The description for the Executioner even matches the in-game descriptor for Gergoth in Dawn of Sorrow, a "gentle beast who grew deformed and was driven mad by imprisonment". It's possible, even likely, this was intentional.