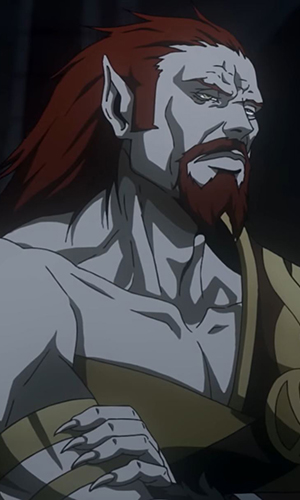 Although Castlevania is a series about a vampire -- Dracula, specifically -- we don't see a lot of vampires in the main series of games. Generally the series is content to show us other creatures, an amalgam of of various Universal Monsters and creatures of myth and legend. Only a few other vampires have ever shown up in the game series -- Actrise, Carmilla, Elizabeth -- alongside one game that features them as minions (Castlevania 64), and that's about it.

The Netflix anime, though, changed that, introducing a host of new vampires into Dracula's ranks in the show's second season. Although most of these vampires remain simple minions, unvoiced characters that do, at least, have interesting vampiric powers, one vampire stood out from the pack: Godbrand, a drunken lout who also held himself about everyone else because he was old, and a vampire, and, well, that was about it. Played with style by Peter Stormare, Godbrand became the focus of one of the side plot lines in the season, giving voice to the discontent in Dracula's ranks and acting as a counter to the machinations of Carmilla and the very plan Dracula had set in motion.

And then he died, because he was an idiot and wasn't very good at playing the political game. Not every vampire is destined for higher purpose, as Godbrand clearly illustrated, which also might give us some explanation as to why so few vampires appear in the Castlevania series. One could suppose that vampires all think they are the superior beings, not just to humans but potentially to each other, and it would be hard for any one vampire to tolerate being under the thumb of another, and Godbrand certainly fits that model. If all the vampires are busily attacking each other, that only leaves a few that can actually work together. Dracula simply has, over the years, found the few he can trust and has kept them in his ranks for centuries. 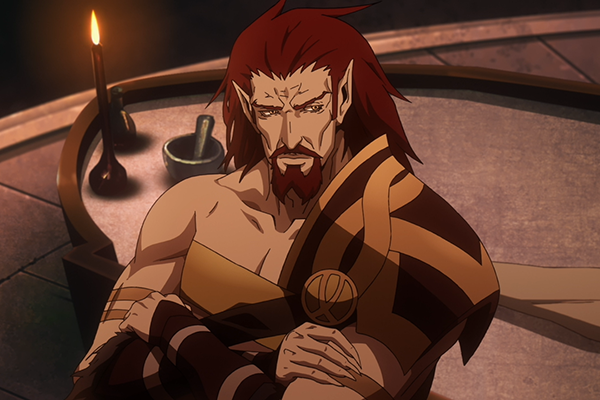 Introduced at the start of season two, Godbrand (voiced by Peter Stormare) was a Viking warlord turned vampire centuries before the events of the show. He had a love of pillaging, of going to villages and killing the townspeople for sport. The time of the Vikings might have passed but his desire for blood and carnage never abated. That made him a powerful warrior in Dracula's campaign against the humans, but it didn't necessarily make him the most astute when it came to matters of politics.

Where Dracula wanted to wipe all of humanity from the planet (with, perhaps, only a tiny herd of them left to serve as a controlled food source), Godbrand wasn't really on board with this goal. He liked having humans around to toy with, to attack, to feed from (and not just because blood from other animal, like pigs, gave him "the shits"). If all the humans were gone, he realized that would spell certain doom for vampire kind. In his eyes Dracula had to be stopped and someone else needed to take over the campaign, so why not Godbrand?

He tried talking to other lieutenants in Dracula's ranks, but Hector, the Devil Forgemaster, wasn't interested in what he had to say while Carmilla, the vampire lady, thought him a drunken moron (she wasn't entirely wrong about that). He tried, repeatedly, to talk about the matter with the other Devil Forgemaster, Isaac, but that lieutenant was even less receptive. Isaac was a loyal soldier, as loyal as they came, and he didn't like what Godbrand had to say one bit.

During one of their many "chats", Godbrand (who was drunk on blood from a raid he's led just hours before) thought he had finally convinced Isaac of the intelligence of his plans, of letting Godbrand take over and bring the humans under heel. Godbrand dropped his guard, thinking himself the victor, and that's when Isaac struck, impaling the vampire with his forgemaster knife. This engulfed Godbrand in unholy flame and incinerated him, destroying his body once and for all. Godbrand died like he lived: impetuously, stupidly, and (because Isaac covered in up and washed away the evidence) ignored by everyone around him.