Among the various "lesser" monsters of the Castlevania series, none may be as iconic the duo of Slogra and Gaibon. First introduced all the way back in Super Castlevania IV, this pair marked some of the earliest original creations for the series, monster designed whole-cloth for Konami's Gothic horror games and not just based on monster of myth, legend, or pop-culture.

Their first appearance was certain eye catching, showing up in the "Tower of Fiends" near the end of the SNES game. But it was with Castlevania: Symphony of the Night that their legacy was cemented. Although they had original appeared one at a time on the SNES (two back-to-back fights in their Tower), they were paired up for the first boss fight of the game on the Sony PlayStation's entry in the series. It might be considered something of a sad drop in rank for the monsters that they went from being near-end bosses to the first major encounter of the game, but they still had flair and style that made their fight interesting and fun.

From that title the duo has appeared, generally together, in several of the Koji "IGA" Igarashi titles, often as enemies in levels throughout the series. Their iconic nature has not changed, though, as amongst all the usual beasts and creatures, minotaurs and monsters, these two have their own specific look and feel that makes you say, "hey, it's Slogra and Gaibon," when they arrive on the scene (only to then get quickly wiped away as our overpowered heroes make mincemeat of them duo).

As noted, the two bosses fought separately in their first appearance in the series. Slogra came first, the starting boss in a trio that then went to Gaibon and finally Death (with Dracula then coming last in his own keep). Slogra was certainly the most vicious of the three, a brutal fight where the boss when leap into the air and then try to land on the hero, Simon Belmont. Each time he was hit he would leap up into the air again, going off screen, to then surprise attack the player once more. The trick of the fight was to keep moving, the jump and attack with momentum such that the hero could then be far enough away from Slogra's next dive to avoid taking a hit from Slogra's own plunging attack. Once the boss had taken half his health in damage he'd lose his spear and attack, instead, with claws, following the same pattern but sometimes performing a lunge strike on the ground once he landed. Many solid runs of the game would end on this hard, nasty fight.

Gaibon was much easier, by comparison, in the SNES title. Gaibon will swoop into his room as Simon enters, and then fly around, spitting fireballs at the hero. These would come as single shots at first, and the fireballs could either be avoided or taken out with Simon's whip. As with Slogra, once Gaibon was damaged for half his health he'd shift, turning reddish in hue before spitting out volleys of fireballs, three at a time, towards the hero. Still, it's just a simply matter of avoiding shots and laying on the damage. Where Slogra could take many lives to get past, Gaibon could often be defeated in a single go.

In their next appearance, in the Sony PlayStation title Castlevania: Symphony of the Night, Slogra and Gaibon were much easier to take care of. Paired together (as would become the standard for these two in their future appearances), they act as a single boss fight in the Alchemy Lab. Although functionally they are similar to their previous appearance -- Slogra will use his sword until he's weakened, then switch to claws; Gaibon will be blue and spit a single fireball until he's weakened, then will turn red and spit larger fireballs -- it's in their pairing that they get a little more interesting. Here, instead of leaping into the air on his own, Gaibon will pick up Slogra and then dump him on the player. This does actually make the fight easier as Slogra is effectively at the mercy of his partner now, but don't sleep on this duo. They appear early enough in the game that hero Alucard could die to them if he's not careful.

Slogra and Gaibon also show up later in Symphony of the Night, this time as normal enemies in the Inverted Castle version of the Cave. They don't pair up and fight like in their boss battle, and in fact they have the same stats as before so by the time you reach them this late in the game you'll basically steamroll them before they can do much of anything.

In the next three games where the hero can fight the duo -- Castlevania: Dawn of Sorrow, Castlevania: Portrait of Ruin, and the multiplayer Castlevania: Harmony of Despair -- Slogra and Gaibon remain basic enemies, appearing much as they did in Symphony of the Night. They fight, with spear and fireball respectively, but aren't much of a danger for the heroes (not like in their very first appearance). In Dawn of Sorrow, it's worth noting, hero Soma Cruz can gain the souls of Slogra and Gaibon. Slogra's soul allows the hero to throw a Magic Spear (essentially a Javelin sub-weapon) while Gaibon can be summoned as a familiar.

It's worth noting that the Gaibon familiar gets used by the Dark King Soma when you fight Soma after the "bad ending" of Dawn of Sorrow. Here Gaibon acts like the familiar you'd expect, flying out to attack the hero physically before flying back. You can't damage Gaibon, he's just there as a weapon in the fight.

In Castlevania: Curse of Darkness, the two enemies make their last major appearance, and the only time so far they've shown up in glorious 3D graphics. Both look somewhat different from their previous appearances -- Slogra is meaty instead of bearing his usual skeletal look, while Gaibon appears much more gargoyle-like. The two can be seen together, like always, with Slogra wielding his spear (he can stab at the player, perform a three-hit combo, and "grab the hero by stabbing them and pumping them full of damaging energy) and Gaibon with a fancy new laser (he can fire his beam, or swoop at players and slash with his claws, and even grab them and hit them six times with his claws). If they show up together, the two can also juggle the hero back and forth for a crazy amount of damage.

Gaibon makes another return in Castlevania: Grimoire of Souls, one more attached to the Dark King Soma fight (as part of Chapter 9 of that game). Here he acts in his familiar form, flying out and attacking the heroes physically. Worth noting, though, that he can also grab a hold of a hero and stun them for a short time, leaving them vulnerable to attack. The heroes, though, can in fact attack Soma's familiars here, meaning you could kill Gaibon if you really wanted to put in t he time and effort (instead of focusing your attacks on Soma himself). 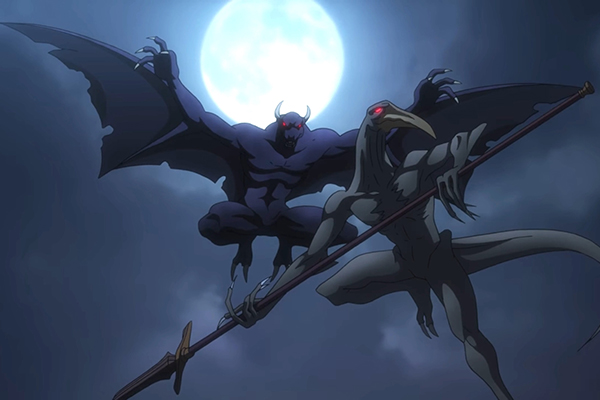 The skeletal remains of Slogra and Gaibon can be seen in the background of the Skeletal Cave in Castlevania: Harmony of Dissonance. It's interesting, in fact, since Harmony takes place between Super Castlevania IV and Symphony of the Night, meaning they died, became fossilized, and then came back to life along their own timeline. Weird.

Similarly, although neither appear as enemies in the Castlevania: Lords of Shadow games, Slogra does make a cameo appearance as a statue at the end of the first Lords of Shadow game, tucked away in the secret ending of the game after the credits roll. This same statue then appears in the Lords of Shadow 2 Revelation DLC where it can be spotted by Alucard as he explores the crypts of the sleeping Dracula.

Early in season two of the Castlevania Netflix series our heroes, Trevor Belmont and Sypha Belnades -- come across a pack of Night Creature. Among this group of beasts, sent to attack a small village for the sake of the carnage, are Slogra and Gaibon. They fight here as they do in many of the games, with Gaibon grabbing Slogra and flying the pair up into the sky so Slogra can drop on his enemies from above. Gaibon can also breathe fire here, a fact that does him no good when Sypha casts her own fire into him, exploding the beast. Slogra, meanwhile, is impaled by Trevor on his own spear, an ignoble end for this beast.