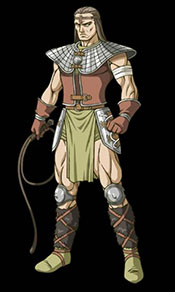 The first two Castlevania games starred Simon Belmont. By the time the third official game in the series came out, Simon had featured in two main games, a proto-Metroidvania remake, and possible an arcade title (depending on who the official hero of Haunted Castle was intended to be). It's no wonder, then, that what the first Game Boy game for the series came out, people assumed it was Simon again. Why wouldn't they? The series had two things consistently in it: Simon and Dracula, and if Dracula came back, presumably Simon had as well.

And yet, the third official adventure in the series, The Castlevania Adventure, starred not Simon Belmont but his ancestor, Christopher Belmont. Set 100 years before the time of Simon, Adventure helped to flesh out lore of the series by showing the Belmonts as a clan of vampire hunters devoted to protecting the lands from evil (read: Dracula).

While Simon and Trevor have both shown up in further games in the series, both sequels to their games as well as the series-spanning Castlevania: Judgment, Christopher did not get the same treatment, only showing up in one further adventure, a WiiWare remake of his first adventure, Castlevania: The Adventure ReBirth.

When The Castlevania Adventure came out, Dracula's Curse was still a year off from release. As such, the rule that Dracula came back every 100 years had been put into effect. However, since we now view the series from the perspective of all the games released (with strong recommendation from the official Castlevania timeline from Konami, we know that Christopher took up the whip that had been wielded by his ancestor, Trevor Belmont, 100 years before.

When Castle Dracula appeared on its customary place among the mountains of the Borgo Pass, Christopher realized that the evil vampire Dracula -- the one that had been mentioned in the stories of his ancestor, Trevor Belmont -- had returned. It was up to Christopher, then, to take up the whip and go to Dracula's castle, the fight his way through the evils that lay there in the fortress, and take out the demon king.

In the end, Christopher was able to defeat the vampire. And yet, Christopher's adventure had only reached the end of its first chapter. A greater danger awaiting him...

The Castlevania Adventure had one remake, created as a download-only title for Nintendo's WiiWare e-Shop. A remixed, re-imagined game, Castlevania: The Adventure ReBirth featured drastically different music, levels, and gameplay from the original, giving fans of the series a new adventure starring one of the more ignored heroes of the series.

For Christopher, thoughts of Dracula did not return until fifteen years after his first adventure. One day (some might call it fateful if they were writing bad fanfiction), Christopher's son, Soleiyu, went missing. That same day, four mysterious castles appeared around the Romanian countryside. Sensing the two events might have been linked (because, duh), Christopher took up his family's whip a second time.

Venturing to the castles, Christopher found four despicable bosses. Defeating each of these guardians destroyed their elemental castle, and once all four had been destroyed, a hidden fifth castle was revealed -- Dracula's Castle, once again whole.

Exploring this final lair, Christoper found not Dracula, but his lost son, Soleiyu. The younger Belmont had become possessed by Dracula's foul magic, serving as a vessel for Dracula's power. Only by besting his son in battle was Christopher able to rid the boy of the magic, revealing Dracula's shadowy soul. Chasing the soul to the final throne room, Christopher battled Dracula one more. The vampire was defeated, and Christopher was safe in the knowledge that this time his homelands were safe from the vampire's evil.

Christopher is the hero of a comicbook mini-series, Castlevania: The Belmont Legacy. The book is a re-imagination of Christopher's first game, The Castlevania Adventure, although it honestly has more in common, story-wise, with Haunted Castle -- Christopher is about to get married, but on the eve of his wedding, Dracula kidnaps his finance, so Chris has to go to Dracula's castle to defeat the vampire and save the woman.

While changes to the story are fine and good, Castlevania: The Belmont Legacy is just not a very good comic. It's poorly written and rushed, leaving readers wondering why they bothered picking up the book to begin with.

Christopher, in many ways, plays a lot like Simon. He has similar controls, a similar (although not exactly the same) upgrade system to his whip, the ability to use sub-weapons. He does, however, have a couple of tweaks to the formula that help to set him apart. Firstly, Chris doesn't have to worry about jumping onto and off of stairs -- neither Adventure game has any stairs at all. Instead, the levels are laid out with ropes and chains for the Belmont to climb, and he can freely jump onto and off of them.

And while his whip skills are similar to the NES version of Simon, Chris gets a special power on his second whip upgrade: the ability to shoot fireballs from his whip. The downside of this final upgrade was then, when Christopher takes damage, he loses the update and has to find it again (hidden in another candle). So while the fireball was very handy, it's use was very limited. It's worth noting that the fireball upgrade made an appearance in Castlevania: The Adventure ReBirth, but while Christopher could still lose the upgrade by being hit, it also had a time limit on it, so even if the player could avoid taking damage, the fireball would still run out over time.

One interesting fact that is worth mentioning is that, originally, Christopher Belmont and Trevor Belmont were meant to be the same character. That was the plan from Konami, naming the character Trevor C. Belmont (or Ralph C. Belmont, if you go with the original Japanese names), with the "C" standing for "Christopher". During the English translation for the Castlevania Adventure, the character was named Christopher and it stuck. Eventually the continuity was officially retconned to make the two heroes different characters on the timeline.