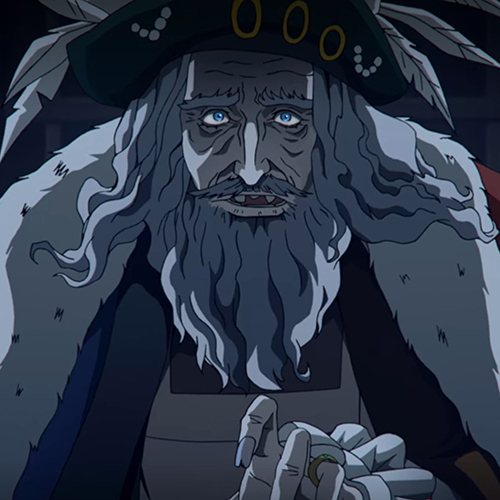 We don't get a lot of villains that are independent of Dracula in the Castlevania series. Every villain we've seen, major or minor, is aligned in some way with the vampire, serving as his lieutenants or working to bring about his resurrection (or both). Villains that actually work separately from Dracula are few and far between and, in fact, may be limited just to Brauner in the main series and Satan (and his minions) in the Lords of Shadow sub-series. That is not a large bunch at all.

The Netflix Anime did add one more villain to that group at least: the Magician, a minor villain who works in his own in a land removed from Dracula or his generals. The Magician is a powerful sorcerer, to be sure, but he's not a big character; he functions mostly as a impediment for Isaac as that man makes a journey across Europe, a stepping stone for a different character, but he's certainly not in the same league as most of Dracula's horde.

But then it is at least good that we get to see other evil figures in this series. The world is larger than just Wallachia, and has more monsters and mayhem than can fit in the single castle. As the series had widened its scope, it is good that the number of potential villains has gone up as well, minor as they may be.

The Magician was a sorcerer of some power, a great spellcaster who, one day, moved into a populous land and took it over. His magic could ensorcel the minds of those around him, taking them over and turning them into drones to do his bidding. He did this wherever he went, and when he finally settled down he took over the whole land, draining it of all its people, save one.

That one survivor was named Miranda and she, too, was a magic user. Although her gifts were different from the Magician, and had in fact faded some over time, she had enough power to resist his spells and refused to be dominated by his magic. An armistice was set up between the two, an unspoken agreement that he would avoid Miranda and her cabin so long as she didn't come anywhere near the new sorcerer's tower, and its fortifications, that the Magician's drones were building.

That truce, though, didn't extend to Isaac, a Devil Forgemaster moving across the countryside on his own mission. The Magician's lands lay across his path, and he had to get where he was going as his mission was one of revenge -- his quarry was far on the other side and to go around the Magician's lands would add weeks, maybe months, to Isaac's route. So, instead, he learned what he could about the Magician from Miranda and then went into the sorcerer's lands.

The Magician, naturally, was none to pleased to have another powerful magic user in his lands. He sent his drones after Isaac and the Forgemaster's demonic horde, and the battle quickly grew fierce. When Isaac wasn't immediately defeated, the Magician pulled their bodies together, creating a giant sphere of drones (that greatly resembled Legion) and sent that sphere after Isaac. It, too, wasn't strong enough to stop the Devil Forgemaster.

Once Isaac reached the Magician's tower he still had to fight his way up, battling the bodies that were sent after him. He eventually reached the top of the tower and there faced off against the Magician. As with the drones in his lands, the Magician tried to ensorcel Isaac, casting his mind control magic at the Devil Forgemaster. Isaac, though, had enough power to break the spell and free himself of the curse. He then stabbed the Magician, breaking the magic that held the whole land under its sway. The curse fell away and all the drones it had been controlling died, their life drained as the magic faded away.

Isaac left the Magician's corpse where it fell and went to loot the tower of its mysteries. He had won, and the Magician had lost, and the land was free of the sorcerer's dark magic, for whatever that was worth.