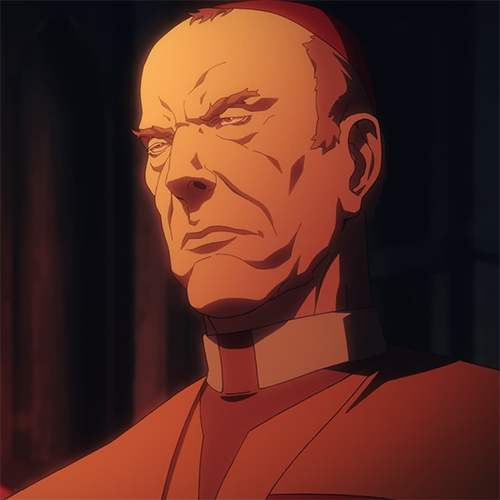 Castlevania is a game series about heroes fighting vampires and monsters for the sake of the world (a fact you likely already know as you're browsing this website). When it was announced that Netflix was going to produce an anime series based on the Castlevania games, it was assumed that it would be a show about a Belmont (at least, a Belmont at the start) fighting against Dracula. But then we get to the Church.

We don't mean the actual Catholic Church (although considering the plotting of this first season it's hard to see that Church being all to keen on this series); no, instead we're talking about the Church in this fictional version of Wallachia. Anyone familiar with the game series will know that early in Dracula's reign as a vampire (ignoring whether or not he was, in fact, Matthias Cronqvist under a new name) he met a woman, Lisa, and the two fell in love. After many years together the Church came after Lisa and executed her for witchcraft. And that's when all hell broke loose.

Dracula was already not the nicest person even on the best of days. The death of his wife, though, pushed him over the edge into an all out hate-rage for all of humanity. This was the churched fault, but in the games we're not given a direct character to blame for this action. The Netflix series changes that; instead of it just being the Church, or random villagers, we now have a out-and-out villain, a crazed Bishop with designs to rule Wallachia from the Church's pulpit. Killing a healer/medicine woman was just one of many steps he took to consolidate his power and keep the townsfolk fearful. The Church was their salvation, not anyone else.

It's an interesting take, to be sure, and it gives us someone to hate. This has the effect of turning Dracula into a figure not to fear (at least, not immediately) but someone to care about. It also, though, gave the series the look like it was very anti-religion, a fact many fans of the game series were quick to point out. Although the show does eventually point out that the Bishop is crazy (and hardly a man of God at all by the end of it), villainizing the Church was a step not everyone in the fandom agreed with.

That might go some way to explain why the Church was minimized as a plot point after the first season. Once the Bishop was dealt with by the end of the season, the show moved on to focusing on actual monsters and vampires, leaving the concerns of mortal (mad)men to other series. 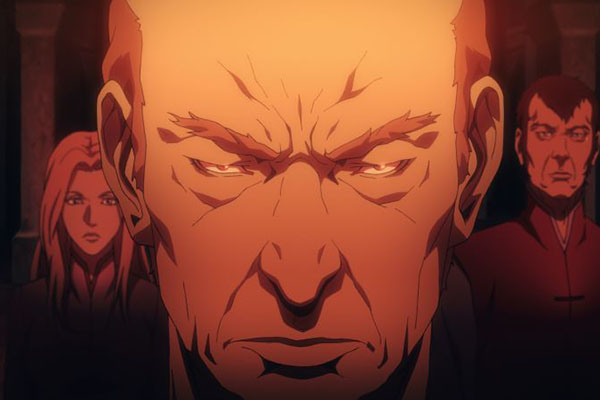 For many years the country of Wallachia was ruled with an iron fist. Vlad Dracula, son of Vlad Dracul, had returned from exile and conquered his homelands, stripping it away from the Turks who had, years before conquered the lands themselves. Dracula then set about cleansing the lands of those who stood against his family, consolidating his power until all the towns and villages feared his mighty wrath. The lands fell in line and Dracula retreated to his castle to rule, from afar, the now peacefully controlled lands of his family.

But then a woman, Lisa of Lupu -- a local medicine woman and scientist -- made quite the impression on Dracula. The two struck up a friendship that turned into a romance, and eventually Lisa convinced Dracula to let go of his warlord past, to become "like a man" and live among the people. This effectively created a power vacuum, one that the local sect of the Church was all too willing to fill. Without a leader to guide the country (even if by fear), the Church took over, ruling the people with their own idea of an iron fist while the legend of Dracula faded from memory.

Climbing his way up the ranks of the Church, one Bishop (voiced by Matt Frewer) began collecting more and more power. He was the one who, in 1475 AD, barged into Lisa's workshop in the town of Lupu, attacking the woman as he declared her to be a witch. He had her dragged off in chains, to be judged for her "crimes" and burned at the stake. He then had his goons burn down her workshop/cabin, the home she had shared for years with her husband. Her husband, it should be noted, who was a powerful practitioner of the dark arts and and power vampire to boot.

Needless to say, when Dracula found out what had been done to his wife he pledged his full and ungodly power against humanity. He appeared at the burning of his wife )only to find her already dead) and declared that humanity had one year to leave Wallachia or he would cleanse them from his lands. The Bishop saw it as proof that Lisa was aligned with Satan, that she was an evil witch. He brushed off the warnings, though, declaring that the power of God was more than whatever power an apparition of the Devil could muster. Life went on and the Bishop continued to consolidate his power assured that he was the man of God to rule Wallachia. 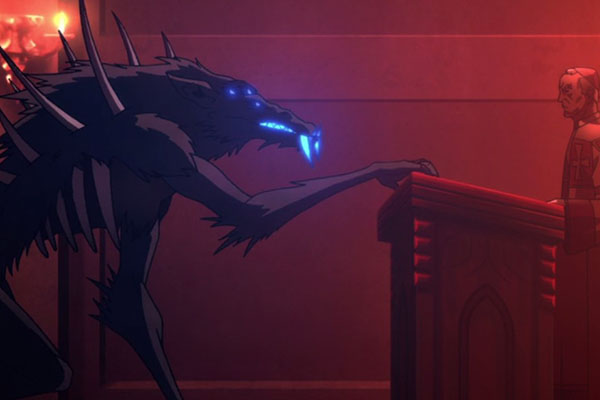 One year later, the Cardinal of Wallachia delivered a statement at the Church of Targoviste, declaring that the appearance of "Satan" one year earlier was obviously just an illusion, a trick played by the Devil. It had been a year and no harm had come to the people of Wallachia. God had one and the people were safe. Like a cruel and funny joke, though, it was at that moment that the sky opened up and rained blood. Dracula had not gone away, nor had he forgotten. He'd promised unholy hell on the people of Wallachia and, one year to the day, he sent his Night Creatures out to slaughter everyone they saw.

Conveniently the Bishop was not there when it happened, having moved on to Gresit to bring the town in line with the Church and stamp out any "unfavorables" he found there. That included the clan of Speakers that had recently moved into town. Speakers were teachers, healers, and scholars, and they had come to Gresit to aid the townspeople and give of their knowledge. The Bishop, however, saw them as heretics to be stamped out. He had his goons terrorize the clan, and it's likely that he would have succeeded in killing this traveling band of Speakers were it not for the intervention of one Trevor Belmont.

Months (maybe years) earlier, the Belmont Clan had also fallen under the evil eye of the Bishop, with the Church excommunicating the clan as witches and warlocks. Their lands had been seized, their properties burned down, and most of the clan had been killed. Trevor was the only survivor, the last heir of the clan, and once he was pulled out his drunken stupor (which he'd been living in since his clan was all but wiped away) he found a cause just and true: defending Gresit from the mad Bishop.

Hearing that a Belmont was in town. the Bishop had Trevor summoned so he could lecture at the man. He told him, in no uncertain terms, that the Church didn't want a Belmont in Wallachia and that Trevor had one day to leave town and never return. Instead, Trevor when back to the home of the Speakers and planned for an attack. He took on the various goons that the Bishop sent to kill the Speakers, defending the noble clan. In the process he eliminated the power-base of the Bishop, helping to free the town of his rule.

As for the Bishop himself, he met an even worse fate. Due to his evil, God had turned a blind eye towards the Church of Wallachia. This was made evident when Night Creatures invaded the Cathedral at Gresit. The Bishop was confronted by evil he though could never touch him, told the demons that he was God's servant and they would be unable to lay a hand on him. Then they ate him which pretty accurately disproved his point.

The madness of the Church wiped from Gresit, Trevor, along with two companions, turned his eye towards Dracula; the Church's evil had been stopped, but there was still a greater threat to Wallachia that had to be dealt with.

The Bishop did not survive the attack at the Church. Instead, by the second season of the show, the "holy" man was just one of many corpses dragged from Gresit by Dracula's minions. His body was dumped in the workshop of Devil Forgemaster Hector, a lieutenant of Dracula who created the monsters that supplied the Dark Prince's armies. Over the course of the season we're shown the body, again and again, until finally it's dragged onto Hector's demonic anvil. Thereupon, with the ringing of his hammer, the Bishop's body is reanimated, a corpse under the thrall of Hector.

When the Castle is moved (via magic and clockwork) to the seaside town of Braila -- ostensibly so that the forces of Dracula can pen in the humans and prevent them from making an escape via the sea -- the Bishop is then dragged out of the castle by Hector. The Devilforgemaster had been convinced by another of Dracula's lieutenants, the vampiress Carmilla, that Dracula needed to be deposed. With the Bishop's holy magic the seawater of Braila was blessed, making it toxic to the undead. As the Bishop dissolved in holy flame, we watched as Dracula's own forces, which had been sent out to take the town of Braila, fell under the attack of Carmilla's forces, which were there waiting in ambush. Dracula's legions plunged into the waters, burning up, and then Carmilla's forces fired off bridges that attached to the castle and gave them a chance to attack.

The plan would have worked, too, if Dracula's castle wasn't then pulled away from Braila by a trio of heroes -- Trevor, Sypha, and Alucard -- leaving Hector and Carmilla in the lurch back at Braila Not that the Bishop saw any of the rest of this as he was finally dead for good.