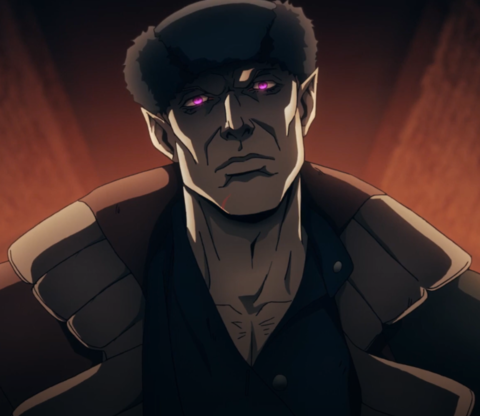 Introduced in the fourth season of the Netflix anime, Ratko is one of the many vampires that served in Dracula's court as the Lord of Vampires looked to destroy humanity. Sent to Targoviste along side another vampire, Varney, Ratko's job was to wipe the last of humanity from this city (which was already in ruins after the attacks of Night Creatures). A loyal servant, he stuck to his duties, killing humanity to further Dracula's goals even after the Dark Prince was defeated by heroes.

A self-proclaimed master of war, Ratko was tough and strong, one of the greatest vampire fighters seen in the series up to that point. He also had an ego to match, considering himself more powerful that just about anyone else around, including the heroes that defeated Dracula. It was to his pleasure when two heroes, Trevor Belmont and Sypha Belnades, arrived in Targoviste. They were on their own quest, to find the various cultists that were seeking a way to resurrect the Dark Lord, and stop those plans. All Ratko cared about, though, was the battle.

Taking on the heroes more than once, Ratko did indeed prove to be a formidable foe. His expertise in war more than made up for the natural talent of the Belmont hero. As it happened, though, Trevor had more than a few tricks up his sleeve and in their last battle together, deep in the treasure-filled chambers secreted under the city. There Trevor brought out a holy weapon he's just recently rebuilt (in that very chamber) and Trevor was able to impale the vampire on the weapon. A sudden and depressing end for the supposed greatest vampire warrior ever.

Even though he's eliminated here Ratko does still have an interesting place in the scope of the anime. Most of the vampires seen in Dracula's court didn't have lines (even major characters like the Japanese vampire queen Cho). Ratko, although not a major villain in the scope of the season (or the series) had more lines, and more personality, that many of the other vampire lords glimpsed. He was a minor, but effective, character, granting him a solid place in the pantheon of villains in the series.