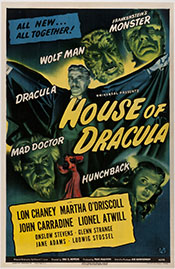 Sometime after the events of House of Frankenstein, Count Dracula (John Carradine) returns. Seeking the help of Dr. Franz Edlemann (Onslow Stevens), Dracula wants to break his curse of eternal life that causes him to feed on helpless victims. After a little convincing, Edlemann agrees to help Dracula. But Dracula has more plans than he initially lets on and this may all just be a scheme. Meanwhile, Larry Talbot (Lon Chaney Jr.) comes to Edlemann for help as well, seeking to curse his own affliction, that of lycanthropy. And then, during all of this, it's discovered that the Frankenstein's Monster (Glenn Strange), having sunk into a bog the last go round, has been dormant under Edlemann's lab the whole time. Now edlemann has to deal with these three monsters, their needs, and possibly his own affliction soon as well.

While House of Frankenstein more or less delivered on its promise of monster action and thrills while weaving a simple, fleet plot, its sequel, House of Dracula is neither quick about its business not thrilling enough to keep me interested. The pace of this movie is much slower, taking time to go over how the monsters are each afflicted with their curse and then describing goofy ways the doctor can cure them. Scene after scene is spent on diagnosis and science junk which might have interested the screenwriter but certainly doesn't make for a very interesting movie. Worse, there are very few action beats in the script at all, with all the good monster action happening in the last ten minutes. It's quite a slog to get through.

Worse, taking the science jargon out of the movie, what we're left with is a movie not all that different from the previous House movie. Mad doctor is introduced (although he doesn't go truly made til later in the film), along with his hunchbacked assistant, Dracula shows up before eventually getting offed around the halfway mark, then the rest of the film is spent trying to find a curse for the Wolf Man before all hell breaks loose in the last act when Frankenstein's Monster comes to life. The rest of the plot is, essentially, a mad libs style cut-paste job fitting details in around those story beats. I already watched this movie once when it was called House of Frankenstein. I did not need to see it retread so quickly.

The cast certainly doesn't help matters. While Lon Chaney Jr. is, as always, good as Larry Talbot, he's given just as little to do this time around as in the past couple of movies. The flick is, once again, all about the mad doctor, but Onslow Stevens is no Boris Karloff. While Karloff mad his mad scientist a compelling vile creature, Stevens plays Edlemann as a reserved fellow, even after he goes mad and starts killing people. He's just not fun, nor charismatic, and he ends up dragging the movie down. Sadly neither Martha O'Driscoll nor Jane Adams, as the doctor's assistants, add much to the proceedings. They're both uniformly bland, leading any scene with just the doctor and his staff to just drag on and on. 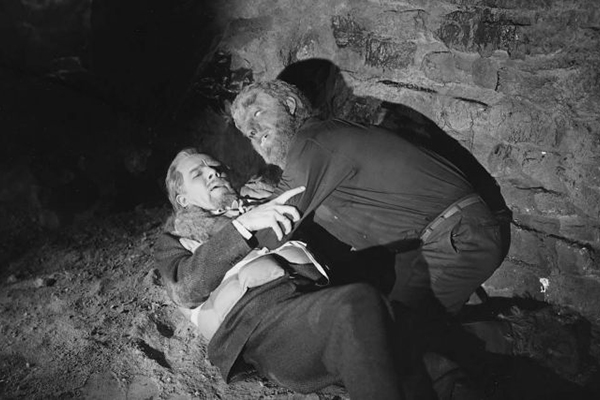 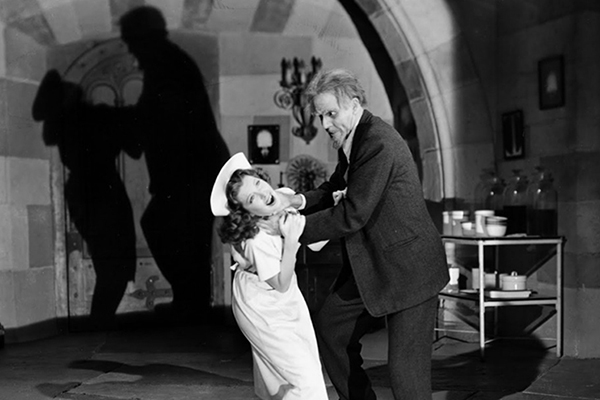 House of Frankenstein showed that a monster mash-up movie could be fun (even if it wasn't high cinema). House of Dracula is just a rote retread with neither fun nor thrills to be had. Universal should have just let the most die off before dragging them through this boring slog.

House of Dracula marked the last of the classic Universal Monsters horror films. The next films to feature the monsters would be part of the Abbott and Costello Meets series of films, starting with the comedians meeting Frankenstein (and Dracula, and the Wolf Man) before going on to Boris Karloff (the Killer), the Invisible Man, Dr. Jekyll and Mr. Hyde, and the Mummy. Finally, as part of a TV comedy special, the duo met with the Creature from the Black Lagoon.

The monster wouldn't actually appear in a proper Universal horror film until the 1970s with the 1973 TV mini-series Frankenstein: The True Story and the superb 1979 Dracula film.