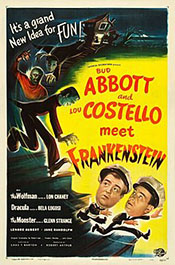 Wilbur (Costello) and Chick (Abbott), are shipping workers running a freight and package delivery service. After a fraught call from Larry Talbot (Chaney Jr.), a call that the men shrug off, the guys deliver two boxes containing th remains of Dracula (Lugosi) and Frankenstein (Strange) to a house of horrors. The remains are more than exhibits, though, as soon enough Dracula and Frankenstein come to life. Wilbur witnesses the happenings, but no one believes him. Even though strange things keep happening on and on. Soon enough, Talbot has come into town (bringing his Wolf Man alter-ego along for the ride), and then horror carnage and amusing hi-jinx ensue.

Watching this movie, what I really want to know is why this movie spawned a small sub-genre of "Abbott and Costello Meet Monsters" movies. I found the so called antics of Abbott and Costello in this movie to just be tedious -- I can fully understand why they had long careers, as when you get them talking back and forth, doing their vaudeville-style shtick, they're brilliantly funny. The quieter moments, when Abbott would say something (and the straight man) and Costello would fire back with a line, are the best parts of the movie here. Their repartee is top-notch and if the film had had more of this, it would have been a winner.

The problem comes in when the film goes broad and the monsters come into play. Watching Costello bumble around for a few moments is amusing, but it's pretty much the only joke the movie wants to play. Every scene with the monsters involved Costello stumbling into them, running away, telling Abbott about the horrors, and then when Abbott goes to investigate the monsters are no where to be seen. Over and over again, for close to an hour of the 80 minute runtime. It stopped being funny long before the movie felt the joke had ended.

The story, too, is an absolute mess. There's a love-triangle setup in the film between Wilbur, Sandra (Aubert), and an insurance investigator, Joan (Jane Randolph). We eventually learn that Sandra is actually our stand-in for the mad doctor, but she's never really given time to be her own character (just a love interest) before Dracula hypnotizes her and makes her do his evil bidding. There's setup to say she wants to use Wilbur's brain for her own ends, but throwing Dracula into the mix muddles her story and ruins that half of the plot line. The insurance agent also never pays off as she's knocked out half way in and essentially just functions as a damsel in distress for the rest of the film. 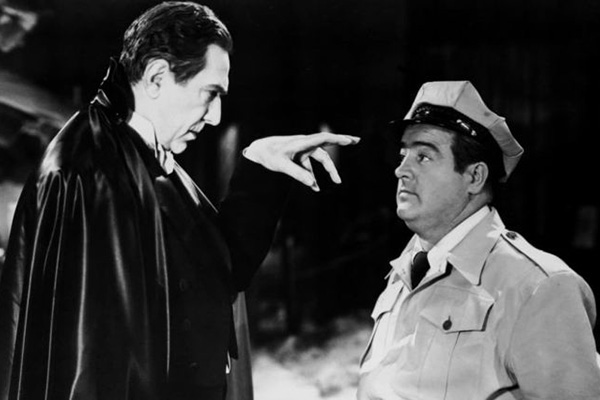 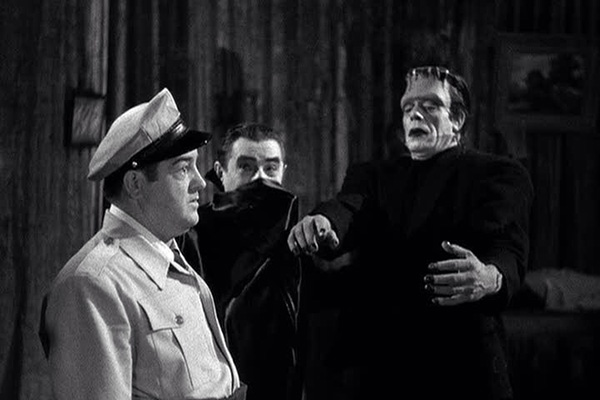 That also ignores the continuity issues this movie raises, such as the fact that the Wolf Man was cured in House of Dracula. Here, Chaney is once again forced to play the unwilling victim of his curse, but he's never even given more of the story than that to play off of -- he doesn't try to find a cure, he doesn't try to end his own life. He simply just reacts to Abbott and Costello's antics and then disappears for whole stretches of the movie. Worse, though, is Frankie who, for the third movie in a row, is given nothing to do until the last reel. Glenn Strange played the monster for three movies in a row and I have to think it was for a paycheck since the films never gave him anything meaty to do with the role.

So I come back, then, to how did this movie warrant further comedic adventures in the land of Universal horror? I didn't think it was funny, or well put together, but just a chore to get through. Yet somehow, in the 30-plus movies they made, Abbott and Costello made five "Meets the Monsters" films (plus one where they met up with the pirate Captain Kidd). Why? Am I missing something? Was this film actually funny and I just didn't get it? I don't see how, and, at least for modern audiences, I don't think other viewers are going to find a secret gem in this middling mess.

After this, Abbott and Costello met up with a few other villains, from the Killer, to the Invisible Man, and then Dr. Jekyll and Mr. Hyde. None of those monsters, though, have any bearing on the Castlevania series, so we won't cover their horror films, nor the Abbott and Costello comedies featuring them, here. Instead we skip ahead to Abbott and Costello Meet the Mummy, the last gasp of the classic Universal Monsters era.