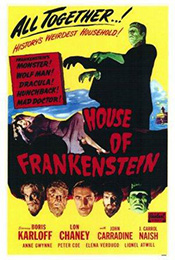 We open in a dank prison out in the middle of nowhere. Within the prison area Dr. Niemann (Boris Karloff), a fan of Dr. Frankenstein's past work who thinks he can pick up where the deceased doctor left off, and the hunchback Daniel (J. Carrol Naish), Neimann's soon-to-be willing assistant. When a freak lightning storm causes parts of the prison to fall apart, Niemann and Daniel escape. They soon take up with a traveling carnival of horrors (of which they kill the proprietors and take over the business). Within the carnival is the skeleton of Dracula and, with little hesitation, the evil doctor revives Dracula and uses the vampire lord to help the mad scientist get some revenge. However, when the authorities quickly catch up to Niemann, the doctor flees, leaving Dracula high and dry (and soon, dead).

Fleeing deeper in country, Niemann and Daniel make it to the land of Frankenstein's castle (the town is called Frankenstein once more in this film). There, beneath the rubble of the estate, they find the bodies of the Monster (Glenn Strange) and the Wolf Man (Lon Chaney Jr.). Soon enough, Niemann is working to revive the monster (and promising to help the Wolf Man, Larry Talbot, find a way to break his curse). But can the mad doctor be trusted, or does he have his own nefarious plans for all involved?

Well, at least Universal started really changing up their formula. Considering how many of these I've seen so far, I've really started to get tired of the basic grind of these movies. While this movie has its flaws, it's not the same old story as previous flicks in the series. If anything, it more closely resembles the later Hammer Frankenstein films with its emphasis on a mad doctor who just can't stop himself from being evil. He's the real monster of the movie, this despite the film advertising itself as a crossover of Universal's various monsters -- Dracula, the Wolf Man, Frankenstein's Monster, and the Hunchback. The monsters may be what put butts in seats, but it was Karloff's mad doctor that was the true villain of the piece.

Although Universal billed this as a big meeting of the monsters, it's really just a sequel to Frankenstein Meet the Wolf Man. Dracula may be in the film, but he's introduced, and dealt with, all in the span of the first act and neither the Wolf Man, nor the Monster, show up until the second act begins. While Universal also considered the Hunchback a monster, he's always been more a tragic figure. What they really were implying was a return of an Igor-like guy (but of course, Igor died two movies prior). Calling the monster the "Hunchback" ties him to the Hunchback of Notre Dame movie Universal made, but neither of these films are related, so that's really a bit of a lie. 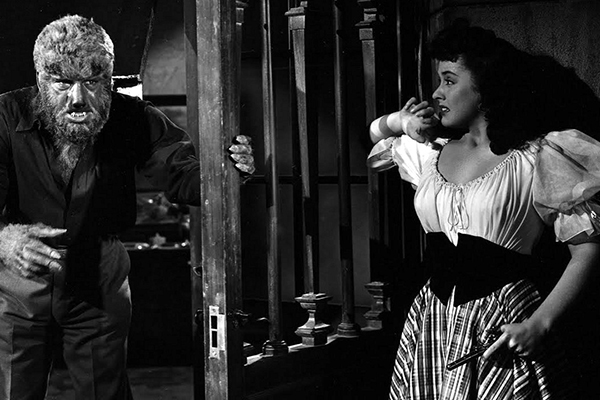 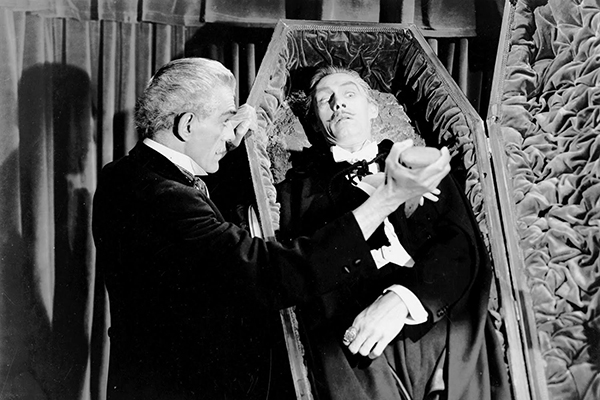 I also had issues, again, with the weird continuity these movies are supposed to have. The big battle between Wolf Man and Monster now took place at the grounds of old Castle Frankenstein in the town of Frankenstein, and somehow both the monsters, and the ruins of the castle, survived seemingly being swept away in a flood in the previous film (seriously, it all was gone at the end of the last flick but is standing around once more like nothing happened, despite the flooding being mentioned again). Dracula's body was also, apparently, found in his castle despite having last been seen in America, so either a whole chunk of his story was skipped over off-screen, or everything we've seen of him before this was thrown out. Considering the fact that they wanted to carry over some of the continuity they've managed to build from the Wolf Man onwards, errors like this annoy me.

Still, if you can ignore the continuity issues (clearly I can't), the movie is actually a pretty fun time. The story moves along at a fleet pace and despite it's episodic nature -- Act 1 with Dracula, Act 2 at Castle Frankenstein, Act 3 at Niemann's old mansion -- the story is interesting enough to carry through. Credit, of course, is due to Karloff, one of the greats of classic horror, and the fact that the entire movie is built around his character and his performance.

Used less well are the various monsters, who each get the short shrift in their own movie. Although Lon Chaney Jr. could still bring solid pathos to Larry Talbot, he's not really given much to do this time around. He's basically the third wheel in a love triangle between the Hunchback and a gypsy girl, Ilonka (Elena Verdugo). Most of his story is really just a variant on his plot from the previous film ("oh, woe is me, I want to die") and the film doesn't really add much new to it. Frankenstein's Monster gets even less to do, though, barely being conscious until the last five minutes of the movie. Considering that the film literally has "Frankenstein" in it's name, I would have expected something more from the monster. Anything would have justified the name more than this.

There's a lot the movie doesn't quite nail. Yet, despite this, I actually found myself enjoying it, and I credit just about all of that to Karloff. The man could sell anything Universal gave him to do and he helps to elevate the film and keep it all moving at a great clip. If you go into House of Frankenstein looking for a great performance from one the legends of horror, you won't be disappointed.