Editor's Note: Some explanation is in order before we can really begin to analyze this story. As per historical fact, Vlad III (aka Vlad Dracula, aka Vlad Tepes) was born in 1431 AD. He lived, he died, and somehow in that time he got vampire blood in him because, as per fiction and legend, he came back as a vampire, the evil Dracula.

However, the Castlevania timeline diverges greatly from historical fact. If we go with the main series continuity, Dracula likely wasn't Dracula (the historical figure) but was instead Matthias Cronqvist, a man who took the power of the Ebony and Crimson stones and used them to become Vlad Dracula (these details, as well as our thoughts on how this doesn't really make any sense, can be read in the main continuity entry for Lament of Innocence, 1094 AD).

Later still, in the early 1400s, Matthias/Dracula met a woman, Lisa and had a child (Adrian, who would eventually go on to be known as Alucard). The woman was then burned at the stake as a witch and Dracula blamed the humans for this act, vowing to wipe them from the planet. Alucard turned on his father in response and aided Sonia Belmont in her attack against the evil vampire (as recounted in the main continuity entry for Castlevania Legends, 1450 AD). That means that, by the time 1450 AD rolled around (the time of the events of Legends), Alucard had to have grown up and become a powerful half-vampire in his own right.

Now, Kid Dracula isn't a main series entry in the Castlevania continuity. It, honestly, would have no place for discussion in the Chronology section of this site were it not for the fact that some elements of the games feed from the main series and then, likewise, go on to add other elements back into the main series (as we'll note below). As such, we've chosen to assign a year for the events of this game even though it has no official place on the timeline. We went with 1440 AD as a point where a child-like Alucard could have adventured based on Dracula's own (historical) birth date. We like the symmetry there and, until Konami officially gives this game a date on the timeline (which they more than likely never will) this works as well as any other.

It should be noted, though, that the game, Kid Dracula, states the titular character is 10,009 years old. We chose to acknowledge the "9" and ignored the rest since any other version of that age would just be patently absurd. We can just chalk up the continuity issue of the stated ages as child-like boasting. 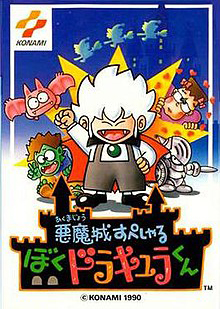 In a mirror of our world (or maybe our world entirely and we just never realized it), there was a very bad man. He was the baddest in all the land, the darkest, the evilest, the nastiest person to ever stride the Earth. He was Dracula, Dark Prince of Romania... and he had a son. This child took after his father, being vampiric in nature, powerful in magics, and with a nasty little evil streak in him. As they say, like father like son and that certainly applied to Dracula and Kid Drac.

On day, this son woke up from a long slumber (which, for a child, could have been anywhere from a few hours to many years -- kids are like that) to find that his father still asleep. Kid Dracula had the run of the castle to do as he liked. However, before the kid could enjoy his free time, a looming threat to Dracula's dominance appeared on the horizon: Galamoth, an ancient Egyptian god. This deity desired Dracula's territory and challenged the Dark Prince's son for power over the throne.

Kid Dracula, feeling awake and sprightly, took the challenge and set off to face this evil usurper. With the help of his father's cape, a selection of relics, and the guidance of Dracula's right hand-man, Death, Kid Dracula ventured out of the castle and across the countryside, through forests and mountains, all to reach Galamoth's fortress and face off against the Lizard King in one-on-one combat. It was a battle for the ages pitting strength against youth, power against exuberance.

After the grueling fight, Kid Dracula emerged victorious. He was proclaimed as the biggest bad in the land and could go back home to earn his father praise and respect (if the elder vampire would ever wake up). Galamoth, meanwhile, went away to lick his wounds and find a new way to potentially steal Dracula's lands out from under the slumbering vampire.

The biggest contribution this game had to the greater Castlevania series was Galamoth, the evil Lizard King/Egyptian God. Sighted here (and in the next game in this sub-series, the simply titled Kid Dracula), Galamoth would go on to cameo (as a boss) in Castlevania: Symphony of the Night and then have his soul appear as a (key) collectible in Castlevania: Aria of Sorrow.

Galamoth takes a bigger role, though, in the last (chronological) game in the series, Castlevania Judgment (set in 12000 AD. There, in this distant future, Galamoth sends his minion, the Time Reaper (another form of Death), to attempt to remake the universe and all of time so that Galamoth is the undisputed king of everything (while Dracula is wiped from the timeline).

Along with Galamoth, two further bosses from this game show up in later entries in the main series. Rahab is an undersea fish-snake from Castlevania: Dawn of Sorrow, a version of which would appear to be the boss of the fourth stage of I'm Kid Dracula. Meanwhile the Egyptian boss Astarte from Castlevania: Portrait of Ruin resembles the boss of the sixth stage of I'm Kid Dracula. These may just be similarities, but considering that series producer, Koji "IGA" Igarashi, seemed to like referencing I'm Kid Dracula, it's probably not coincidence.

Meanwhile, these two Kid Dracula games weren't the only times the Kid Dracula character was featured. He was a playable character in both Gokujo Parodius! and Jikkyo Oshaberi Parodius, two parody space-shooters from Konami. The company also featured cameo appearances of Kid Dracula in Legend of the Mystical Ninja as a collectible item and New International Track & Field as a celebration float. He's also appeared in a number of pachinko games that the company has produced over the years. As with the main Kid Dracula titles, none of these games are officially in Castlevania continuity but they are interesting for anyone with a passing interest in the series.