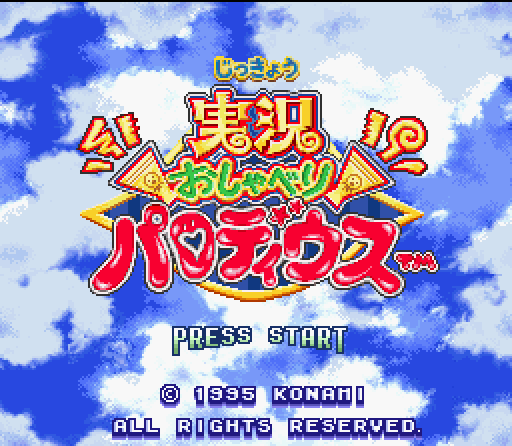 The Parodius series saw a flurry of updates over a short period of time. Every couple of years or so, Konami would publish out a new game in this parody shooter series (usually to coincide with a new release for one of the main-line entries for Gradius or TwinBee), with the company continuing to prove they had a sense of humor about their own games and their company's history.

That said, the quick releases between the third title, Gokujo Parodius!, and the fourth title released a year later on the Super Famicom, Jikkyo Oshaberi Parodius, didn't leave a whole lot of room for innovation. It's another cute-shooter with a bunch of Konami mascots, but while there are more characters included, the basic game play remained the same.

For some, this staid game play might be fine. Certainly if you have a character you like and you wanted to spend more time with this, this fourth entry does fit the bill. Still, it leaves the game feeling like more of a half-step for the series than a proper sequel. An expansion pack when fans might have been hoping for something more to sate their appetite for comedic shooting action.

The game does have all the series weirdness, from odd stages to giant weird and odd bosses, and a collection of soundtrack cues that will remind you of classic (public domain) songs while adding to the strange allure of the title. Of course, that's also how the third game worked as well, so it's still par for the course for the series.

Overall, this game seemed more like a retread of the basic material instead of a fully new game, which might go some way to explain why the game play was changed up more substantially in the next sequel, Sexy Parodius. That one added a missions structure to the game play, leading us (at the Inverted Dungeon) to think this game was released simply as a hold over for the series while the creators put a little more time into the next big game for the series. A way to mark time more than an innovative new sequel.