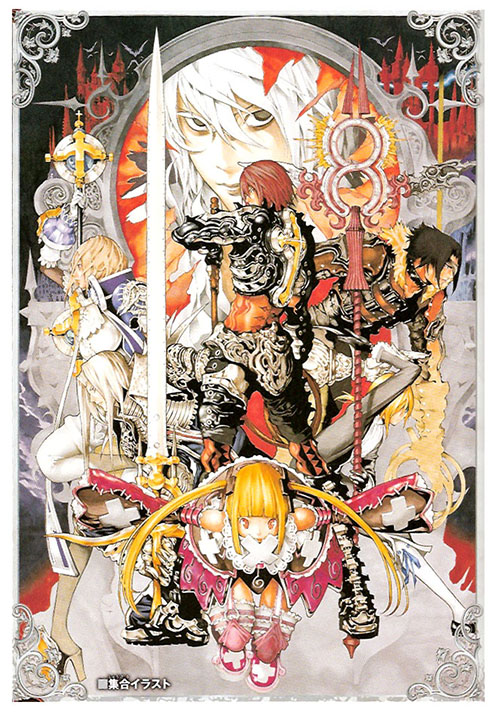 In the distant future, Galamoth (a villain seen briefly in a couple of previous games, but who's primary role was as the antagonist in the Kid Dracula series) wanted to find a way to destroy Dracula once and for all -- preferably at a point in time where Galamoth, and not Dracula, would be able to take over the world. Using his minion the Time Reaper, Galamonth sent this foe into the time rift to find a way to destroy the Dark Lord.

Aeon, one of a group of time agents, searched out thirteen souls that would be key to ruining Galamoth's plans (and thus save all of existence as we know it). Pulling these souls (the playable heroes and villains from the Castlevania series) into the rift, Aeon basically created a "tournament" where-in the various warriors would battle to find out who would be best suited to a final battle with the Time Reaper. Each had their own reasons for participating (be it Eric Lecarde, young and brash, learning to use his Alucard Spear, Dracula wanting to ensure his continued existence, or Maria Renard who was in the fight to get a bigger pair of tits -- we wish we were joking about that last one), and each fought for the right to save the world... and themselves.

In the end, the Time Reaper was defeated, and Galamoth was unsuccessful in his plan for world domination. Or was always unsuccessful, and this game just shows how so from the very beginning of time (time travel is confusing).

Judgment features 14 playable character (some of whom are unlocked over time), each with their own skills and abilities. Although none of them really resemble themselves in the main series (the art style for the game is... well, hideous, to say the least), each character has an in-continuity story in the game. Examples include Eric trying to learn more about how to use this mysterious Alucard Spear he's inherited, or Cornell being stuck in a wolfen form prior to the events of Legacy of Darkness and learning to control his new powers.

Whether showing up before, during, or after their main adventures (Shanoa, for instance, pops into the tournament part-way through Order of Ecclesia, not that you'd know it from that particular game), the characters then go back to their normal lives, potentially having learned something that will influence them down the road. Or not... Trevor, for instance, seems to have come into the tournament after all his adventures, and one character, the Golem, is only sentient within the time rift, and when returned to the real world, is back to being a dumb, lumbering mass of clay and flesh (and is eventually killed by a vampire hunter).

In other words, while the stories told in the game are all, technically, "in continuity", the plot is a big mess of ideas. It's best not to think too long about whatever snippets of story are conveyed, since by and large they don't have any lasting effect on the main continuity.