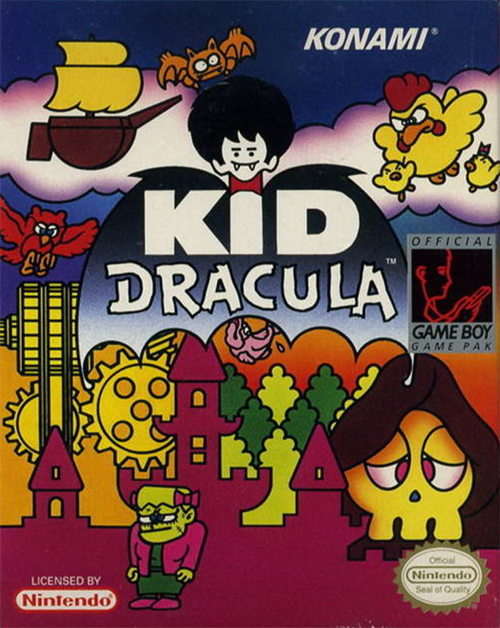 After the events of his first adventure, Kid Dracula returned home to the praise and adulation of the land. He was the baddest guy around (second only to his dad, Dracula, of course), and Kid Dracula could rest easy knowing no other challenger would ever come to face him again as he was just that big (well, so to speak) and scary.

Or so he thought. Galamoth -- evil Egyptian "god", Lizard King, and villain of the first game -- obviously felt that his defeat the first time around was a fluke. He desired a second shot at Dracula's throne and would stop at nothing to claim the prize he felt was rightfully his. Sensing that maybe the vampire prince had gotten too cocky, Galamoth again challenged Kid Dracula to a battle for supremacy over the land. Knowing he had to take any challenge put before him, the prince accepted and once again prepared to venture out into the world to defeat his rival.

However, in the intervening time since his first adventure, Kid Dracula had forgotten all his powers and lost all his special abilities. Thankfully with the help of his father's cape and the guidance of Dracula's right hand-man, Death, Kid Dracula was able to gain the powers and relics he needed to once again venture through the forests and mountain surrounding the lands of Dracula's castle all so he could reach Galamonth's evil sky fortress.

As before the two faced off, locked in deadly combat for control of the lands. Galamoth had a few new tricks up his sleeves, but it was the vampire prince who, once again, came out the victor over the Lizard King. This ensured Kid Dracula's (and, of course, Dracula's) dominance over the land for centuries to come (while Galamoth was sent off to maybe find some new way to conquer the world, perhaps through time travel). Kid Dracula once again returned home to the praise and adulation of the land. He was the biggest, baddest, nastiest guy in the land, and now everyone truly knew it. For real this time.

If the story of Kid Dracula sounds a lot like it's predecessor, Demon Castle Special: I'm Kid Dracula (circa 1440 AD), that's because it is. Although positioned as a sequel, Kid Dracula was effectively a remake of the first game. The Famicom version never left Japanese shores and when Konami decided to release a version of the game on Western shores, they went the "remake" route instead of making a more basic port.

That helps explain the "reset button" used on the main character (taking away all his powers) as well as the rehashed plot line. In effect this game could either sit on the same place as the original title on a timeline or act as a sequel. We choose to think of it as a sequel since the two games are just different enough, but since there's no real "true" timeline for the Kid Dracula games, which version of events you accept is entirely up to you. In effect it's just as easy to view it like many of the Mega Man games for the Game Boy, positioned as the same adventure just... different.