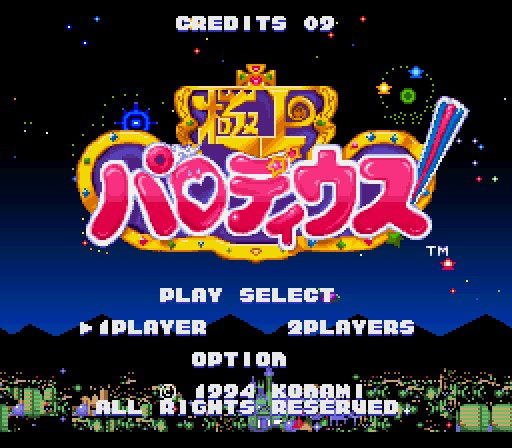 Konami has always had a silly side to their development. This doesn't just include adding a furniture collection mini-game to Castlevania: Harmony of Dissonance, or secreting Moai heads into various Gradius games; occasionally the company verge into outright parody.

Perhaps their most famous venture into this are the Parodius games, as a series of titles that act as a mash-up of Gradius and TwinBee series, just with the hyperactive silliness cranked up well past 11. The first two games featured just heroes from those two series blasting their way through increasingly silly stages, but with the third title, Gokujo Parodius (aka Gokujo Parodius: Pursuing the Past Glory, aka Fantastic Journey), the series became a crossover mascot parade.

This is also nothing new for the company as Konami had already released two crossover mascot action games in the form of Konami Wai Wai World and Wai Wai World 2: SOS! Parsley Castle. Adding additional mascot character into the Parodius series felt on brand, as did the inclusion of Castlevania character Kid Dracula (himself a star of his own parody games, Demon Castle Special: I'm Kid Dracula and it's Game Boy semi-sequel).

For this third entry into the series the company certainly went all in, ramping the strange humor and weird references up and up, making it one of the most bizarre titles in Konami's stable. But it's also a fun effort that stands as something more than just a curiosity, a fun game in its own right that fans of just about every Konami series needed to see, if only once, just to watch the company let its hair down and get truly weird in the best possible ways.