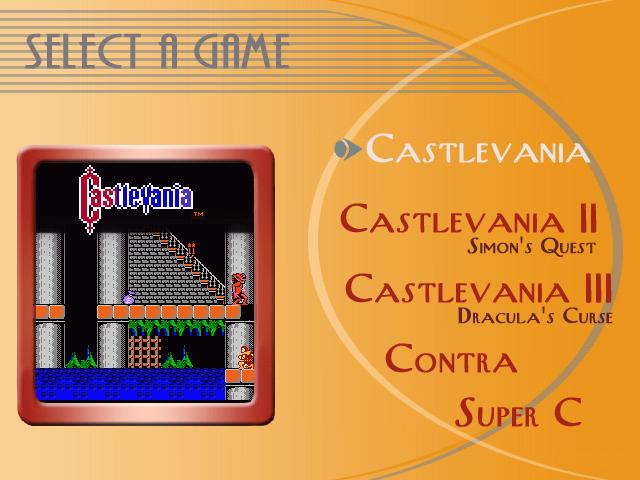 As games age, their value proposition goes down. That can easily be seen on the shelves of any video game retailer, especially those that also sell used games. When they come out, games will get priced at 50 or 60 bucks, but over time that prices drops and drops until they hit the bargain bit at 20 dollars, 10 dollars, or less. And then used games keep the titles around, often around 5 to 8 bucks. If a company wants to revisit its past catalog, especially without remastering the title, they have to find some way to give customers a value proposition worthy of their dollars.

In 2002, Konami of America published out a solid value deal for fans missing their classic NES titles who didn't also want to setup their old consoles again (if they even had them sitting around): the Konami Collector's Edition: Castlevania & Contra. As the name on the box suggests, this is Castlevania and Contra (and, hidden game Jackal, plus a demo of Dance Dance Revolution) all on a single CD-ROM. Depending on when you found this and how much it was (as it, too, inevitably went from full price to the bargain bin), five-plus games could have seemed like a good deal at the time.

As a collection of NES games, the title has all the games you'd expect from the name: Castlevania, Castlevania II: Simon's Quest, and Castlevania III: Dracula's Curse alongside Contra and Super C (see Asteroid G reviews: Contra & Super Contra). All games are presented in their NES glory, which makes sense considering the cross-section of this package and region it was released in (the U.S.).

Of course, that does mean that some features fans might have expected are missing from this older collection. As it's a cross-section of only NES games, alternate versions are missing entirely. The Famicom Disk System releases of Castlevania and Castlevania II aren't here, and neither is the Famicom edition of Castlevania III with its far superior music. Castlevania's PC edition (which did suck, in fairness) is also missing despite this collection also being PC exclusive. And, as far as American releases go, the Arcade editions of Contra and Super Contra are nowhere to be found, either.

Naturally, these exclusions do make sense: this is a basic package with a single emulator built into the back end. To add in support for other systems, like Arcade machines or older PC releases, would have required more emulators in the system. Whatever Konami of America's thinking on the matter (or development house Konami Computer Entertainment Hawaii, Inc.), and the pessimistic side of me thinking it was a money proposition over anything else, these other emulation systems weren't included. The Famicom editions, meanwhile, aren't here likely because gamers in America would have expected them to be translated and that, too, would have been expensive (and, really, unfair to expect of the company).

And, really, when looking at this collection of games, it's hard to judge the company too unfairly with what's here. The five featured titles (plus Jackal) are a solid cross-section of the company's NES efforts and, certainly, some of their most famous games from that era. Casual fans in America at the time likely didn't know the differences between the Japanese and American releases of the games, and few honestly remember the arcade editions of the Contra games as the NES title replaced those games in most gamers' minds. Frankly, if you asked players which versions of the games they wanted to play, the NES editions would likely be the ones mentioned most of the time.

With these five games in the set, there's is some value to be had here. With a controller (or just a responsive keyboard) hooked up these games play pretty well (it can take some work to get a controller working properly with the set, mind you, as this is a CD from 2002). They play with all the classic sound and effects you remember, looking just like you want. These are solid games from the classic era and there's a reason these five titles are treasured in the hearts of fans. Plus, there's also Jackal!

As far as the set itself is concerned, this is a basic emulation package. The games load from a start screen and immediately drop you right into the games themselves with no other build up of zest. Frankly, the starting menus could use some work as their pretty bland and no nonsense. They also have an obnoxiously loud "boom" they play every time you make a selection, a "feature" I could seriously live without. Clearly the designers thought it was cool, but that's a sound effect that didn't age well with time.

Inside the games you can quickly press a button to pull up an emulation window. This allows you to make save states, reload the game, or bounce back to the title screen to choose a new game. Again, it's fairly bare-bones and expected now. It's the minimum amount of emulation features you'd expect from a set like this, but it doesn't hold a candle to the in-game features available in the Castlevania Advance Collection; good for the time but not great now. Additionally, the in-game menus all use red text, which is awful for those with color-blindness. I personally don't have that but even I had to admit that the red doesn't have enough contrast against the NES graphics. it feels cheap and not very well thought out.

All things considered, this was a pretty bare-bones collection. I can see the value of it at the time but now, twenty-odd years on (and counting) there's little reason to get this title. The Castlevania games in here are also found over in the Castlevania Anniversary Collection, with more games to boot, and the Contra titles are available elsewhere as well. A stripped down package like this is only for the collector that has to have everything; all other fans should look elsewhere at this point.