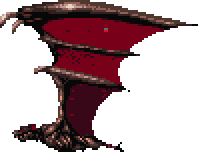 Is there anything more ubiquitous in the Castlevania series than bats? These enemies, first appearing all the way back in the first Castlevania, have appeared in (just about) every single game in the series. Showing up in inconvenient spots, and sometimes spawning in when the player spends too long on a single screen, the simple bat is both connected to the vampire that lives in the castle by essential morphic resonance and an iconic part of the Castlevania make up.

That first game in the series, though, also established another frequent member of the series: the Giant Bat. This guy, first showing up at the end of the first stage of the original game, has also appeared regularly (although not as frequently) as his smaller cousins. Sometimes they're huge, other times to come in groups that then merge into a giant form, but they're always big, hulking beasts that can cause a real problem for an unprepared hero.

Fighting Against the Giant Bat 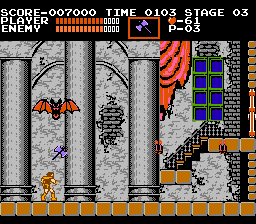 First appearing in the original game, the Giant Bat (called the "Phantom Bat" for his first appearance) is a fairly basic fight. It'll come off the ceiling (where it was resting) because swooping down at the player. It will hover for a time before swooping in again, often towards wherever the player last was. If the player lets the fight go on long enough the Giant Bat can, supposedly, spit fireballs as well, although we'll admit that we've always killed the bat before it has a chance to perform this. Of note, six of these guys show up on the Final Bridge area at the last stage of this game, although in this zone you don't actually have to kill the bats to proceed (and it's better if you don't try). And also. this bat is essentially the same encounter you'll face in port Vampire Killer.

Strictly the Giant Bat doesn't appear in Castlevania: The Adventure but is instead a second form of Dracula. That said, it's still a Giant Bat in basic form and function, flying around the top of the screen while it drops smaller bats in an arc. Since there are platforms on the sides of the room, reaching the bat form isn't all that difficult, and once you've killed the Giant Bat you've also defeated Dracula and won the game. From first boss to last boss, that's quite the upgrade in just two games.

Although Giant Bats don't appear in the original Castlevania II: Simon's Quest, they are in the (port in name only) Tiger Hand Held edition. Here the bats will swoop in from the back of the screen and hover in awkward places to attack the hero. They required two hits to kill (instead of one), but are otherwise just large enemies. Of note, this version of the game sucks.

The Giant Bat appears in two different locations, along two paths, in Castlevania III: Dracula's Curse (but you're not forced to fight both of them). In both instances, the bat appears hanging from a ceiling waiting for the hero to arrive. It'll fly around, trying to swoop at the hero, but this big trick with the bat this time is that it'll break into smaller bats (three times, for a total of eight smaller bats) as the hero damages it. You'll have to kill all the bats to finish this fight. This does mark the first instance of the "Bat Company" form of the Giant Bat. 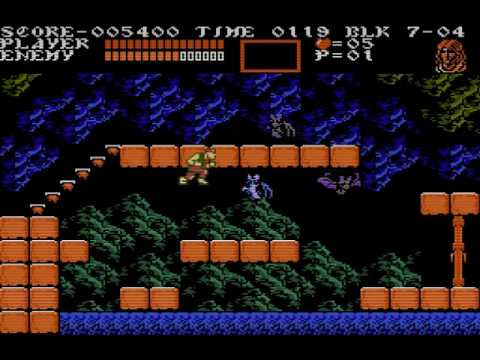 Giant Bats appear in Castlevania II: Belmont's Revenge, although they're back to being smaller enemies. When attacked, they'll break into two smaller bats which will then have to be hit again to be killed. This is the smallest possible form of Bat Company, which is a worthy bit of trivia.

We have another kind of Bat Company in Super Castlevania IV, this time called the "Zapf Bat". Here the Giant Bat is made up of gems and gold (as it's the boss of the Treasury), and these gems will break off and damage the hero as he attacks the bat. As hero Simon Belmont attacks the bat, it'll eventually break into smaller and then smaller still. As the Zapf bat is damaged, the health bar will go down, but while the other bats will split off only one bat (which will be denoted by the sound that's made when it's hit) is the actual bat that needs to be killed. Once that bat dies, all the other bats die as well.

Showing up as one of four bosses that make up the opening of the Shaft fight, the Giant Bat is the opening act of this encounter. The giant bat will have two major attacks, either winding up its wings before spitting a fireball, or curling up into a "drill" and slamming into the ground. Of all the encounters in this boss battle, the Giant Bat is certainly the easiest.

The Giant Bat, of course, is the first boss in the Castlevania remake for the the Sharp X68000 (released in the U.S. as Castlevania Chronicles. Here the bat takes on a bit of the Bat Company form, coming in as a group of bats that become the larger one. Each time the bat is hit it'll recoil, splitting into bats before reforming. In general, though, it just continues to swoop and flutter, as the Giant Bat generally does. And, of course, more of these bats show up on the Final Bridge although, as before, you can skip past all of them. 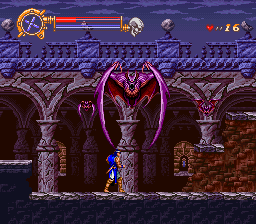 In Castlevania: Dracula X, the Bat Company (known in the U.S. manual as "Myotia") might look like the Rondo of Blood Giant Bat but it acts very differently. The Bat will fly around for a bit and then, when attacked, break into small bats that will fly around the room in a wave pattern. This is a dangerous form as the bats will take up a lot of space in the room and will be hard to avoid. They are also susceptible to more damage in their broken apart form though, so if you can attack it then, that's the best time of all.

Once you reach the Inverted Castle in Castlevania: Symphony of the Night, the Giant Bat (known as the "Darkwing Bat") will be one of the first bosses you could face. The bat can attack in one of three ways: with a wing gust that will throw the hero across the room (so you'll want to avoid, or turn to mist, to avoid this), it'll swoop in and bite at the player, or it'll turn into a drill form and dive across the screen. It's not a hard fight to manage, though, so just keep low and jump it's close-up attacks and you'll soon earn the Ring of Vlad, one of five relics required to get into the final boss room of the game.

Castlevania: Harmony of Dissonance features the Giant Bat in an optional fight. When the hero first enters the room, it'll be shrouded in darkness, but the darkness will then be revealed to be the bodies of the bats which will then form into the Giant Bat. It's a fairly standard encounter, though, with the swooping, fireballs, and and drill attacks we've seen before. Note, though, that after the bat is hit a few times (usually three but sometimes just one or two times), it'll break into smaller bats and fly to a different part of the room to reform. Then it'll start it's attacks again. These smaller bats are harmless, so this just serves to draw out the fight as the heroes do their work.

The Bat Company returns full force in Castlevania: Dawn of Sorrow in a very creative fight. The smaller bats will appear and form up into one of three shapes: a Giant Bat that will swoop at the player twice before breaking apart, a Giant Hand that will attempt to grab the player and squeeze, dealing heavy crushing damage, and a Moai Head that will float up and down while it spews out rings. Of note, the boss can only be damaged when its take one of these forms, while it cannot be hurt at all whiles it's broken into smaller bats. That said, the smaller bats can still, annoyingly, damage you, which is just rude. 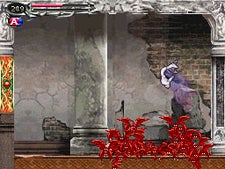 The Phantom Bat form returns in Castlevania: The Adventure ReBirth where it'll swoop back and forth before breaking up into smaller bats and flying around the room to reform and attack again. Similarly, the Phantom Bat also appears, in classic form, in the Retro Castle mission of Castlevania: Harmony of Despair. It'll behave just as it did in the original game and shows up both at the end of the first area and then later, in a pack, at the Final Bridge section.

Finally, the Giant Bat appears in Castlevania: Grimoire of Souls, both as a normal form and then as a Giant Lightning Bat. In both cases, it'll swoop around and then break apart into smaller bats when attacked. The lightning version can, of course, attack with extra damage due to its shock powers.

Technically a creature called the "Giant Bat" appears in the Lords of Shadow series. Popping up in Castlevania: Lords of Shadow - Mirror of Fate, this beast is almost wolfen in design, but with large wings as well. It rather resembles Dracula in mid-bat transformation, in fact, which may have been where the design for it came. As it is, the beast can fly around the battle chambers it appears in, but also will land and crawl at the players, all in an attempt to bite and claw and the hero to deal damage.

Other Appearances of Frankenstein

Technically the Giant Bat (or Bat Company, as it's also called) is in Castlevania: Aria of Sorrow. When you get to the bottom of the Arena you'll find a boss room. The bats will fly out, joining together to form the Giant Bat. However, right as you think you're about to fight this bat instead a giant hand comes out an crushes it, giving us our introduction to the real boss: Balore.