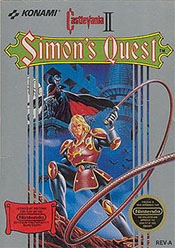 Many have observed that sequels to games on the NES tended to take a drastic left-turn from the original games. introduced two new characters, made each character play drastically different (whereas in the first game, both brothers played the same), and made it so that jumping on enemies -- the main way to kill them in the first game -- didn't kill the enemies. Zelda II: The Adventure of Link was even more radically different from The Legend of Zelda, taking a top-down adventure game and making it into a side-scrolling action-adventure with RPG elements. The early era of the NES was weird (at least in the U.S.).

All of that is to serve as an introduction to Castlevania II: Simon's Quest, the Castlevania series version of that hard-left turn. In the game, it's been seven years since the events of the first title, and Simon Belmont is once again venturing into the terrible wilderness of the Romanian countryside. But this time, he's not just scaling to the top of a castle; no, now he's out searching the countryside for five pieces of the body of Dracula. It seems Dracula laid a curse on our stalwart hero and if Simon doesn't reunite the body parts and resurrect Dracula the curse will kill the unlucky Belmont.

For it's time, Simon's Quest was both an innovation and a bit of an odd-man-out. See, instead of the standard platforming that the first game helped to perfect (although there's still plenty of that in the sequel), Simon now has to talk to townspeople, search the countryside, find hidden nooks, collect a plethora of items, and complete a sprawling quest. You, as the player, have to tease out clues and locations to find all the items needed (especially if you're going to do it in time to get the best ending to the game).

Unfortunately, getting in the way of your quest aren't just the innumerable monsters, but the townspeople and their faulty dialogue. In the United States, the translation we got for the (originally in Japanese) game was, to put it kindly, laughably bad (if you ever find the actual "graveyard duck", let the editors of the site know). Some clues were harder to parse out (due to space constraints or faulty spelling/grammar) while other clues lost all meaning. Even if you could figure out what was meant, though, many of the items are hidden in out-of-way, seemingly random locations. Getting the best ending in the game -- which requires you to beat Dracula as quickly as possible -- requires memorization, luck, and many sacrifices (buy the upgraded whip, or say "screw it" and move on before you run out of time).

But while the game may be tough, both by design and by translation, it's still fun to play. As before, Simon controls solidly. He does have the inability to change direction in mid-jump (which he gains later in the series), and you still can't jump on stairs yet (again, later in the series), so those of us that have played later titles may be thrown off a touch (my first time playing the game, on the very first screen, I died twice before realizing what the rules were). Just having a whole world to explore with no clock, no real need to be anywhere (if you don't realize that there is a time limit for the best ending), and the power to just do as you like is awesome -- open world games do have their perks. It would be years before the Castlevania series tried for a game as open and explorable as this. For us State-side players, this was our first taste of the Metroidvania titles to come.

For the ears, this game is just as good as the first, if not in some ways better. Simon's Quest sports many good tracks, not the least of which is the first outing for "Bloody Tears", a song that has shown up in just about every subsequent game since. Sadly, while the music sports a great mix of tunes, the graphics aren't nearly as innovative. Color-wise, the NES was (of course) limited, but the locations aren't that interesting either. Most areas end up looking the same, from "town" to "forest" to "mountain" to "fortress". Colors may change, not only on the enemies but the landscapes themselves, but the basic sprites do not, making everything feel very samey. Maybe this was due to size constraints of the NES cartridges, but with a map as large as this, more variance in the areas would have given the world more life.

Despite its flaws, though, Castlevania II: Simon's Quest holds a unique place in the Castlevania series. It may not be the best game but it's certainly an innovative one and not like many other games that came out during its era (in the West, at least; see Related Games for more titles like Simon's Quest from the NES era). Despite its flaws, it's worth a couple of playthroughs just to see Konami at its most innovative.

For whatever reason, Konami elected to license Castlevania II to Tiger Electronics for the release of a portable game. Electronic Castlevania II is not very good at all, as should be expected from Tiger Handheld game, though. Don't bother worrying if you've somehow missed out by not playing the title; you haven't.