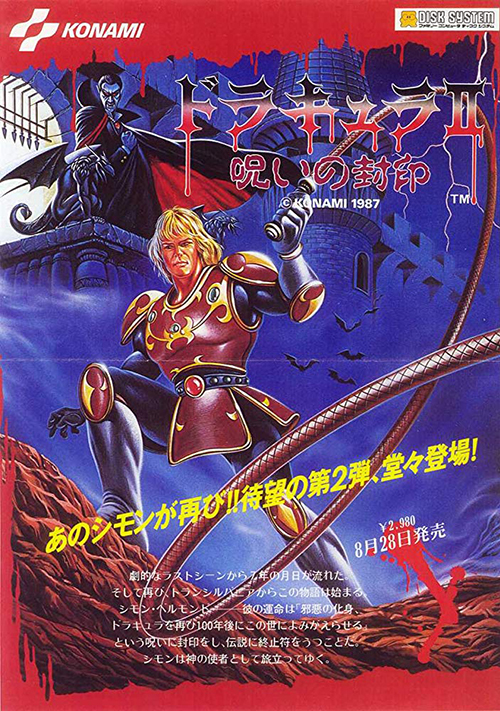 Seven years after Simon Belmont first bested Dracula, the vampire's dark magic still hung over the lands. The townsfolk were afraid to go out at night as the forces of the demon king were still spread across the countryside, terrorizing travelers when the sun went down. Although the vampire was dead, it was almost as if nothing had changed at all for the huddled masses of Romania.

Simon, too, had his own problems. Although he had won the fight against Dracula, in the process the vampire had his revenge upon the hero. His death triggered a curse on the hero, causing him to die if he didn't find Dracula's body parts (which Dracula's minions had immediately hidden around the countryside). He then had to take these parts to the ruins of Dracula's castle and cast a ritual that would have, once again, resurrected Dracula. Only doing this would the curse break, but it would mean Dracula could have the chance to escape if Simon didn't defeat him once more.

Realizing this was the only way to keep his life, and ensure the continuation of the Belmont clan, Simon knew what he had to do. Tracking across the whole of the lands, Simon had to explore every nook and cranny, venturing deep into caverns and battling through haunted mansions. All the while the pressure was on as Simon knew that if he didn't move fast enough the curse would take hold, killing the hero (even if he managed to kill Dracula first). He was under a time crunch and this only added more pressure.

As he explored he came across two of Dracula's minions, both set in their mansions to try and slow down the hero and make him waste more time. He fought Carmilla, the evil countess who had been made a vampire years earlier, and the Grim Reaper, Dracula's main lieutenant and the collector of souls. Defeating these two fiends granted Simon powerful relics, and their mansions (along with three others across the land) held the body parts of Dracula that Simon needed. These he gathered and, eventually, made it to the ruins of Castle Dracula.

Upon casting Dracula's remains to a fire at the center of the ruin, the vampire rose again, whole and ready for battle. Simon was forced to fight the Dark Lord again, a fierce and righteous battle for the sake of Romania (and Simon's own soul). When the battle ended, Simon was left alive and the foul demon to a sealed grave where the vampire, hopefully, was going to stay for all time. (But, of course...)

Castlevania II, along with Vampire Killer, are the two games in the series most credited with influencing Symphony of the Night and it's follow-ups. Castlevania II is exploration-heavy, requiring the player to search all of the land for items, weapons, and body parts in their quest to destroy Dracula. The player has to talk to villagers, learn where all the secret places and items are, and do so in a speedy manner. It was a revolutionary little game, and quite the divergent sequel from its predecessor (especially for American audiences never exposed to Vampire Killer due to that game's Japanese-only origins).

Unfortunately, Simon's Quest is not as beloved in the U.S. as its predecessor. While the exploration-style game play was ground breaking, the translation of the game into English was flawed at best ("god-awful", "atrocious", and "incomprehensible" also being applicable terms). Many of the clues to finding the items needed for the quest had to be parsed from the townspeople, and when they weren't even speaking clear English, or saying anything even closely resembling the original clues in the Japanese game, it did make for a confusing mess of an adventure.

The game had three endings, depending on how long the player took to finish the game. The best of the lot has Simon survive, but shows Dracula slowly rising from the grave again (at least his hand emerges). In one of the alternate "bad" endings, Simon dies having failed to completely seal Dracula's dark magic, while in another the game simply states that Dracula is dead at the hands of Simon Belmont. The best ending, with Dracula emerging from his grave, is the one that's considered canon.