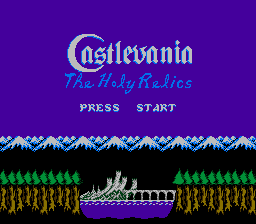 Although generally it's the Game Boy Advance games in the series that get the most rom-hacking love (Castlevania: Aria of Sorrow far and away has the most hacks of any game in the Castlevania game), the older games in series do see some love from hackers as well. Although many of those hacks simply rearrange the basics of the game for a "kaizo hard mode" style experience, occasionally you can something a little more creative from the fans.

Such is the case with Castlevania: The Holy Relics, a rom-hack that stands as a kind of side-story to Castlevania II: Simon's Quest. Working on the base of the original Castlevania, this game expands the basic game play, adding in relics to collect, keys to find, and completely new, and devilishly clever, levels to explore. Although I am a fan of Castlevania II, with its weird charms, I do feel like a game like The Holy Relics would have a better sequel to the original (at least as far as staying within the expected bounds of the game play experience).

In the hack, erstwhile hero Simon Belmont has to venture around the countryside of Romania collecting seven relics and protecting them from the curse of a great evil. But where Castlevania II used this concept for a proto-Metroidvania adventure, The Holy Relics presents a setup closer in style to Castlevania Adventure II. The game presents you with a stage select and you chose which of the linear areas, from Camilla's Crypt to Deborah Cliff, you want to explore.

Once you're in an area, you play through a stage that wouldn't be out of place in, say, Vampire Killer. Simon has an open, free-scrolling level to explore and he has to find a key in that area to unlock the door at the end to move into the next section. Stages are generally broken into three (or so) sections, and once Simon has found the key in each area and finished out the stage, he'll fight a boss and restore the power of a relic. Then it's on to the next stage, in any order the player chooses, until six relics are in Simon's possession and the last area, Vrad Manor, is unlocked for the final confrontation against the evil sorcerer, Lord Ghulash. 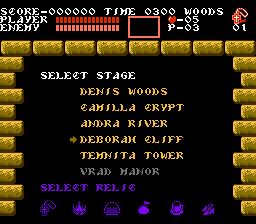 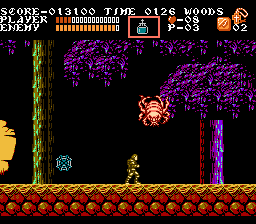 There's a lot to like about this rom-hack. Considering the base game its built on, a lot of work was clearly added in to The Holy Relics to give it such an expansive feel. It isn't just that each of the stages have been completely reworked, which they have, but that whole new mechanics were added into the game right from the very opening screen. Having a stage select is a really interesting function and gives you a greater sense of freedom in how you explore the game and tackle each of its challenges.

Having that stage select also means you can target specific relics first and use their abilities to better explore other parts of the game. You can only take one of the relics into any given stage, but their various powers, from temporary invincibility to health restoration and even an item that will drop Simon at the top of the screen so he can potentially reach upper areas much faster, dynamically shift the game in interesting ways. You can find charges for the relics in stages, so item conservation, and smart use of the relics, is key to having the best overall experience in The Holy Relics.

That said, the relics are essential to the game. You can play through the title without using any of the relics at all as each stage is completely linear in design (with minimal back-tracking for doors) and each stage can be tackled in any order. Consider the relics, and what they can do, a bonus feature added into an already solid experience. Take them if you like, or ignore them, but The Holy Relics lets you make that decision for yourself without forcing it upon you or resorting to hand-holding.

Along with the reworked main experience (including two new bosses put into the game -- a giant skeleton and the end boss), the game also features completely reworked sprites and music. The soundtrack is great, featuring a number of tracks from later games mixed to work with the original game's music capabilities. The graphics are less impressive; I appreciated that everything was redrawn, as that probably was a time consuming effort, but not all the sprites look as good in the new art style as they did in the original game. None of them are bad but I'd struggle to actually call them improvements. 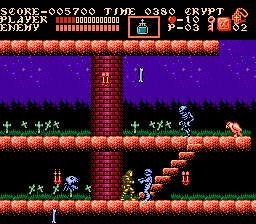 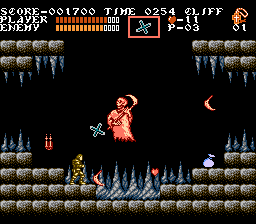 In general, though, this game is a solid winner. It really does feel like a proper, well thought out sequel to the original, one that could stand in place of Castlevania II. It plays smoothly, sounds great, and has a bunch of new features worked into the main game that you'll actually wish appeared in more Castlevania titles. If only ever NES rom-hack could be this good.