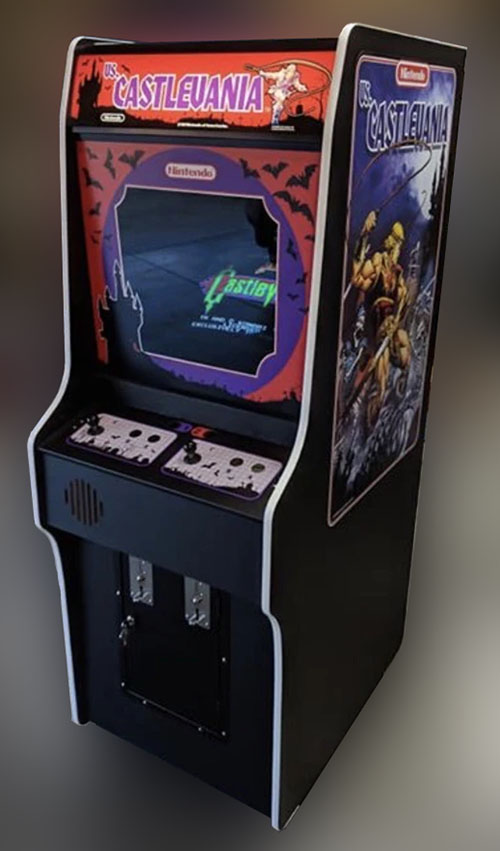 Although Haunted Castle is the Castlevania arcade game everyone talks about, it wasn't the only one released in the early era of video games. That one was Konami's creation, sure, but Nintendo also had a series of arcade machines out, the "Vs." series, that various game companies contributed games towards. With the success of Castlevania on home consoles (Famicom and NES), Konami pushed the title over to the Vs. format as well.

For those unfamiliar, the Nintendo Vs. System was a line of arcade cabinets (single cabinets, dual-joined "wedge" cabinets, and sit-down table cabinets) produced by the company for arcades. Unlike traditional arcade cabinets which contained only a single game and buying a new game meant buying a whole new cabinet, the Nintendo Vs. system was built with extensibility in mind. The cabinets were all standard, and they had swappable card slots (along with swappable marquee art) that allowed arcade owners the ability to refresh the games cheaply without all the expense of buying an entirely new cabinet.

As the name would imply, Vs. cabinets had an emphasis on two-player gaming. Some games lent themselves very well to this style of gaming, with titles like Balloon Fight (with two-player co-op baked in) and Golf (both Ladies Golf and Stroke and Match Golf, both with alternating player turns) being stand-outs for the form. Not all games worked as well in this format. Players waiting for their turn in Super Mario Bros. could be waiting quite a while if the other player was good at the game.

And then there's Vs. Castlevania. If you're sitting there going, "Castlevania on the NES doesn't have a two-player mode," you have already spotted a major flaw in the "Vs." idea here. Unlike other games in the "Vs." series, Castlevania did not feature any kind of added two-player mode. This was a single-player game, through and through, without anything special added for the arcade format. 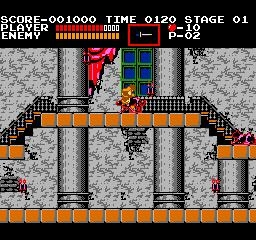 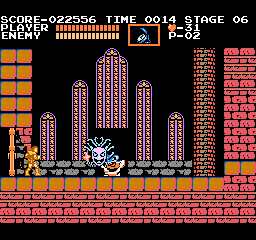 Loading up the game (either at the arcades back in the day, or on original hardware if you're lucky, or just via MAME now), you'll notice very little that's different about the game at first blush. Although the title screen is slightly different, with a little "Vs." pasted onto the familiar logo, the game otherwise looks as you'd expect from the NES title. The same familiar tunes, the same classic graphics. Things have been brightened up a bit, with the colors feeling like they have more "pop" to them, but if you didn't compare them side-by-side it's doubtful you'd notice the difference. It looks like the NES game, which you can play at an arcade for 25 cents.

Play into the game, though, and you'll notice a couple of major changes, both of which were put there for one simple goal: to steal your quarters. Back in the day (and, hell, this still may be the case) the goal of an arcade game was to give players about three minutes of play time and then leech their quarter. Some games, like Ghosts 'n Goblins, did this by putting in about a minute of (relatively) sedate game play before dropping in a trap or difficulty spike that would kill the player after one minute of game time, sending them right back to the start. Die three times, get your three minutes of game play, pop in another quarter. Constant money feedback loop perfected.

For Vs. Castlevania, Konami took a slightly different tactic; since the basic game play is exactly the same -- enemy placement, level design, item drops, all of it -- the company instead spiked the overall difficulty. Firstly, Simon now takes more damage from hits, losing easily a quarter of his health bar in one go (even from damage that would have only ticked off a couple of bars in the NES game). The first level is easy enough in the original that even with this penalty most players should be able to get to the end of the stage and beat the Giant Bat lurking there. But once you get into stage two, the natural difficulty progression of the short game means you'll likely die, and quick, from this increased damage. It takes about three minutes to get into stage two, and then you'll die quickly and go back to the beginning. Same perfected cycle to steal your quarters.

But let's say you're good at the original and can do "no damage" runs. Well, you still have to worry because the time limits on stages has been greatly reduced, down to 170 seconds from 300 originally. This, too, will push the player to die faster, since they can't mosey now, and if they take too long, that's another death and a speedier chance towards that quarter. For arcade owners this was great as it meant they could trust the machine would churn through players. The players, though, got rather the short end of the stick there. 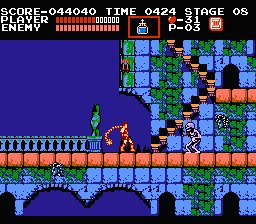 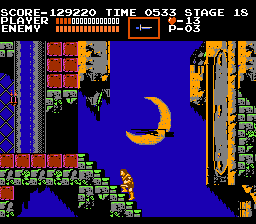 Honestly, for a game like Castlevania, the whole "Vs." concept was an awkward fit. Some games, like the aforementioned two as well as titles like Dr. Mario, Baseball, and Ice Climber could do well in an arcade setting, two players battling it out side-by-side as other players watched from the sidelines. That's a great, communal moment. But Castlevania, a game meant for one person, just doesn't have that same appeal. And with the spiked difficulty it's hard to see players looking at Vs. Castlevania and thinking "yeah, that's a game I want to go out and buy." The delicate balance of the game's difficulty is ruined here.

Those looking to use the arcade setting would have been better off with a different Nintendo arcade system: the PlayChoice-10, a cabinet that gave players a selection of ten games to play and a fixed amount of time to do it (per quarter). The games there were ported in their original forms, so the version of Castlevania that was made available in that series was the game players would get at home, and thus a better experience all around in this setting. By comparison to even that version, Vs. Castlevania is a flawed experience.

Even now, with access to thousands of arcade games (via emulation), you don't see much of Vs. Castlevania. The game is too hard for casual audiences, and those hardcore player might like to touch it -- speed gamers, really -- have the traditional NES experience to lean back on. The one thing that might be a draw for speed-runners -- the fact that the timer is shorter so, at the end of the stages, the counter takes less time to tick down -- comes with the other caveats of this game. Since speed-runners tend to use a lot of damage boosting to hustle through games, the increased damage tables here would preclude that strategy. Plus, death would be a bigger penalty here, sending players back to the last checkpoint, as it's so much more frequent in this version of the game. Overall, the Vs. Castlevania experience would probably end up slower than the NES game, which may be why we just don't see speed-runners play this variant very often.

That leaves Vs. Castlevania as a curiosity. It's an interesting footnote in the series, but not something most players are going to go out of their way to experience regularly. One time at the controls is probably enough.