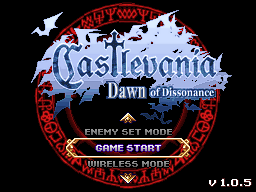 Editor's Note: Just so it doesn't seem like I'm purposefully doing a hit job on this game I want to point out that my opinion here isn't the opinion of every player that has tackled this game. If you are interested in an alternate opinion I will point you over to JupiterClimb and his two part play-through of this hack. He is much more effusive about this game than I am in the below review.

Credit should be given to the hackers that figured out how to go in and edit the DS Castlevania games as their worked opened up that ecosystem for all kinds of rom hackers to come out and try their hand are creating new hacks for the series. Although I'm not a programmer in that respect, as I understand it the DS games proved something of a challenge, but the work does by the community led to not only the DSVania Randomizer but the ability to hack the game as well.

One of the first hacks I heard about because of this was Castlevania: Dawn of Dissonance, a game designed on Castlevania: Dawn of Sorrow but edited to make a sequel to Castlevania: Harmony of Dissonance. And, to its credit, it does kind of work in that regard. It has Juste Belmont, and a host of his companions, all exploring a version of Castle Dracula. It's a neat idea and I can appreciate what the editor was going for. Sadly, in execution this hack falls very, very flat.

The first issue with the hack is its difficulty. The creator, Serbagz, does state that they went out of their way to create a hard mode hack of Dawn of Sorrow. I guess if that's your thing that's fine, but there are plenty of hard mode hacks of the various Castlevania games, and "hard" seems to be the default state that hackers aim for at this point with their games. Hard hacks are a dime a dozen and kind of boring, especially when they're done poorly. And make no mistake, Dawn of Dissonance is a bad hard-mode hack. 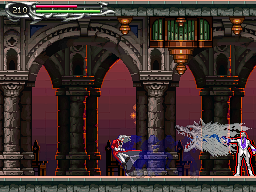 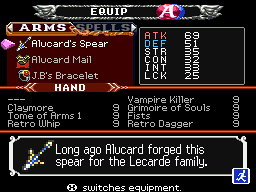 The issues with the hack come early and never really let up. From the start you'll see that the defense on all the enemies has been up-scaled massively. it often feels like whatever weapon you get will make little difference in the span of the game because the damage you're projected to make (via your ATK score) will be diminished by half, if not more, against even the weakest of enemies. The designer clearly wanted you to have to fight enemies in a slow, tedious dance from the start of the game to the end, and they make you pay for every second of it.

You will be fighting a lot of enemies, mind you, as the game is jam-packed full of enemy spam. You can hardly take a step in most areas without being confronted by three enemies at once, over and over. Often they're crammed into long, tight hallways such that the only direction you can go is through them, not around or above. Even if you know what you're doing, know what to expect, and are very, very good at Castlevania games, you will still end up spending a long time in each and every zone of the game as the hack punishingly spams you with unavoidable enemies.

Worse, most of their attacks are unavoidable, too. You'll quickly get tired of the skeleton archers, the skeleton gardeners, and the skeletons apes in the early zones as they have the uncanny ability to target you from off screen and nail you over and over again. They're all positioned to hit you the second you come on screen, even before you see them. It's annoying, and aggravating, and frankly just bad game design. There are ways to make games hard without having to resort to cheapness, but Dawn of Dissonance ignores all those rules.

It's a pity, too, because the game itself could be pretty good. The idea of a sequel to Juste's adventure has merit as his game wasn't exactly well loved when it was released, nor has it had the kind of cultural reevaluation among fans that would elevate its position in the Castlevania pantheon (unlike, say, Castlevania: Circle of the Moon). Taking the hero, putting him into a Metroidvania that had improved mechanics over his original game, and letting him loose on a new adventure is a fun idea. 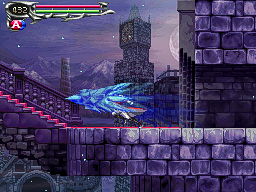 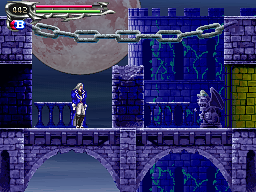 Certain decisions the creator made are also interesting. Juste has an ally he'll see from time to time, Sonia Belmont (no, not that Sonia Belmont, although she is named after her and designed to look like her) and the plot of the game sees these two allies assist, and bicker, with each other in fun ways. You also get to see Maxim Kischine and Alucard as well, and they add to the story (with Maxim providing some amusing dialog as well) that keeps things fun and fresh.

Not all the decisions on this front, though, entirely work. The villain is a Bartley sorceress that's just a re-skin of Celia Fortner while another of Juste's allies is a simple re-skin of Yoko Belnades and the obviousness of this edit actually pulled me out of the game some. That's in addition to many other edits, not just re-skins of other characters but throwing in references to other games like Mocktroid and Hylian Archers, all with the game graphics you expect, that made this game feel a little too silly as it was punishing me to high heaven.

The game is clearly a labor of love for the designer -- just look at the work they put into Juste, taking presumably the model of Julius Belmont and really putting in the work to make Juste look like his own character -- but there are enough stumbles that hold the game back from being good, let alone great. I could have forgiven the odd art design choices if the game were more playable, but the difficulty of the hack is unforgivable. Hard hacks are fine, but this goes well beyond that and right into the territory of simply not being any fun at all.