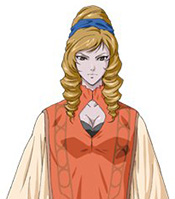 It shouldn't come as any big revelation to note that the Castlevania series is absolutely obsessed with Dracula. Even more than the Belmonts, the series is really all about the main vampire dude. If he's dead, his followers have to bring him back. If he's alive, the heroes have to kill him. In the span of the series there are only three games that don't feature a battle with Dracula by the end of the story, and two of those star Soma Cruz who is, in fact, Dracula reborn.

Once Dracula died in 1999 AD (I hope you lit a candle for him), his followers had to find new ways to bring him back. This did add a nice twist to the proceedings, especially once Soma rejected the power of Dracula -- no Dracula, no castle. Thus, for Dawn of Sorrow the writers came up with a new twist: a cult of Dracula worshippers that also had decent architectural skills. They built their own castle as bait and sucked Soma into another adventure.

Leading the cult was Celia, one of the few lead female antagonists for the series (and second only to Carmilla in terms of power). Although she only featured in one game, her plot was actually pretty good and, depending on the ending you take (namely, the bad ending) was actually successful in her machinations.

So we salute Celia. You actually won, in a way. Kinda. Sorta. Good for you (we guess). 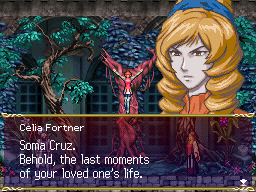 As leader of the Dracula-cult With Light, Celia believed that the world needed both light and dark, good and evil, to exist. As the greatest figure of evil in the world, Dracula was the one true source. With his death, and then Soma's rejection of Dracula's power (in the events of 2035 AD as told in Dawn of Sorrow), the world was without it's source of true evil. Celia knew (well, as far as her faith was concerned) that this had to change.

To that end, she had her cultists build a castle as a replica of Dracula's own. Within this castle her people summoned monsters and demons to populate the halls. She then launched an attack against Soma as a lure to bring him into the castle. She knew if she could get him within the castle his powers would fully awaken and then, at that point, she'd have a chance to turn him to evil so he'd accept his true, dark power. And if he didn't, well she'd have him killed so his magic could go to another potential host for Dracula's power (Dario Bossi or Dmitrii Blinov, the two potentials she had waiting in the wings).

At the castle, Soma does indeed find his powers blossoming once more. Through his explorations of the castle he encounters both Dario and Dmitrii. Despite their attempts on his life, Soma wins both duels keeping control of the power wawy from the two power-mad accolites. With their defeats, Celia then works to try to convert Soma once more. She summonns a doppelganger that takes on the shape of Soma's true love, Mina Hakuba, so that she can "sacrifice" the "girl" and force Soma to cross to the dark side. What Celia doesn't count on is Alucard's interference. With Alucard's help, Soma is able to see through the petty ruse.

At that moment, though, Dmitrii shows up and lures Celia away so the two can plot a new way to bring back the Dark Lord. As Celia soon learns, tragically, is that Dmitrii's plan is to sacrifice her, body and soul, so he can absorb her power and transcend. Soma, though, is able to take on the new, more powerful accolyte and defeat him. Dracula's rebirth is prevented and, eventually, the world resumes its relative peace.

Celia is sacrificed in the good ending for the game (although, to be fair, it doesn't work out so well for her). However, if, as Soma, you fail to equip a talisman you get from Mina before going into Celia's chamber, then Soma fully gives in to the dark power and becomes Dracula. This unlocks "Julius Mode" where you play as Alucard, Julius Belmont, and Yoko Belnades in an adventure against Soma (complete with a very traditional, Dracula-style battle at the end).

That said, even this "bad ending" doesn't go so well for Celia as, right before fully becoming Dracula, Soma kills her in an act of vengeance for the death of "Mina". So, either way, Celia dies. Damn.

Interestingly, Celia is one of the few major antagonists in the series to not have a boss battle. Whether you go for the good ending or the bad ending, you never have a direct confrontation, with action, against Celia.

A seemingly unrelated character in Lords of Shadow also bears the name "Celia". She was the love of one of the knights of the Brotherhood of Light. her knight was then killed when he gave in to the carnal lusts compelled upon him by demons. Aside from thename, there seems to be no other connection between the two characters.