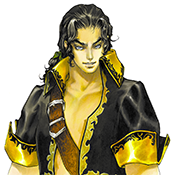 Konami got a lot of mileage out of very little story early on. For a long while the most story a Castlevania game included was a quick text scroll at the start and maybe a short block of text from the occasional villager or random hero joining your party (followed either by searching a graveyard for hours to find some random duck or a quick handshake, respectively). Then came Castlevania: Symphony of the Night which pretty quick molded the rest of the series around it. Now games could no longer just feature men in leather skirts hitting Dracula really hard with a bit of leather; now they needed story.

Of course, fans of the series ate it up (members of this site included). Symphony was a singular work, an our-of-nowhere reinvention of what a Castlevania game could be featuring not only fantastic game play but also breathtaking graphics and music. Even now, decades later, the game stands as an ageless achievement. So it was only natural for Konami to want to replicate that glory. After a couple of varied attempts (in a 3D adventure and then on the Nintendo Game Boy Advance), Konami had a winner with Castlevania: Harmony of Dissonance.

What Konami presented with Harmony of Dissonance was an also exact recreation of the elements of Symphony that they thought people loved, distilled down to a portable title (the opinions of the staff of Inverted Dungeon notwithstanding, largely because Konami has never cared what this site thinks or says and put up a restraining order against us so we'd stop hanging outside their corporate offices shouting). Once again we were presented with a bishonen vampire hunter, a once-hero turned unwilling villain, and two castles to explore. It was everything fans asked for in a sequel.

Thus we have not only Juste Belmont but also this page's character in question, Maxim Kischine. Once an ally of Juste, Maxim has his own dark path to tread that lead him directly to Dracula's castle and a conflict with his old ally...

From an early age Maxim Kischine and Juste Belmont were friends. Having grown up in the same village, the two played together and, once Juste was inducted into the Belmont line of whip-wielding heroes (the induction ceremony was light on the drinking but heavy on the naked hazing), the two trained together as well. They both also had a close friend in Lydie Erlanger (although she, in kind, mostly had the hots for Juste and his dreamy, long, white hair).

The problem for Maxim was that Juste was the favored son -- though they both trained together, Juste was expected to be the great hero that saved the day and killed Dracula (because even this early in the timeline everyone knew Dracula would be back again, and again, and again again, like a fungal itch that won't go away). Maxim trained hard and felt that he should be lauded as the great hero, so he bailed on the town ostensibly so he could "go train"... but he really had other plans.

After two years of searching, Maxim had managed to find (among the ruins spread across Romania) Dracula's five body parts (as Simon Belmont had fifty years before in as per Castlevania II: Simon's Quest). Unfortunately the events for Maxim didn't play out quite like with Simon -- instead of resurrecting the demon so that Maxim could kill it off once and for all, the dark specter of Dracula instead invaded the sorta-hero's body, possessing him and splitting him in twain.

Now of (literally) two minds, the Dark Maxim (who was, like, way into Nightwish) returned to the city and kidnapped Lydie, stealing her away to Dracula's castle (once again reborn on the cliffs of the Borgo Pass). The Light version of Maxim, serious injured and missing huge chunks of his memory, stumbled back to town and ranted at Juste about how a demon has kidnapped Lydie. The two went to Dracula's castle but split up at the gates with Maxim seemingly venturing off to find Lydie himself.

Inside, though, Juste encountered the Dark Maxim and slowly pieced together the truth. He learns about the two castles which act as dual-representations of the two halves of Maxim's own soul. He finds his friend in various states and tries to aid him. Eventually, he is confronted by a truly evil version of Maxim, one who swears he has bitten Lydie and they both will be vampires forever. Juste, though, is able to rid the evil from his friend through holy battle (aided by a pair of bracelets that he and Maxim used to wear, which reminded the later of their friendship). Near death, Maxim throws off the dark influences which coalesces into the dark specter of Dracula. This is the form Juste faces off with while Maxim runs from the castle.

Outside, Juste rejoined his friends, Maxim and Lydie, as they watch the castle fall. Maxim, fully restored, felt guilty for he'd done. Lydie, meanwhile, had only vague memories of her time in the castle (including the vampiric love-nip from Maxim). Juste, though, assures them both that the evil is gone, that their job is done. They head back home to live the rest of their lives in peace.

As Symphony of the Night had done before, Harmony features multiple endings. Although the best ending, one where both Maxim and Lydie survive, is considered the official canon, there were two other endings to the game. The worst saw Maxim bite Lydie before his battle with Juste but, when Juste is unable to free his friend from the darkness he kills the possessed hunter instead. Both Maxim and Lydie die and Juste is left alone as darkness spreads across the land (quite a bummer, really). Meanwhile, the slightly less bad ending see Juste confront Maxim, mortally wounding his friend in the battle. Lydie isn't killed in this version, but Maxim dies and darkness still spreads across the land.

Beating Harmony unlocks additional modes for the player to work through. The main new feature is "Maxim Mode" where you can take Maxim through the castle -- this is similar to the Richter Belmont mode in Symphony of the Night. Like Richter, Maxim is a light and agile glass cannon. While he's fast and powerful (featuring a huge attack stats and a floaty triple jump), Maxim has terrible defense. Players won't be able to take a lot of hits but, between his Stellar Sword (a long blade) and Throwing Star Boomerang (his only sub-weapon, which works a lot like the normal Cross), Maxim can certainly dish it out.

To note, Maxim can be taken into the other unlocked mode of the game, Boss Rush, by holding the L and R buttons while choosing the mode's difficulty.