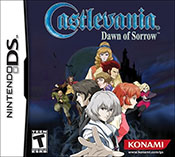 One year after the events of Aria of Sorrow, the followers of Dracula are back, lead by the sorceress Celia, and they are once again looking for a way to bring the Dark Lord back into the world. Soma Cruz, presumptive Dracula-heir (presumably the proper home for Dracula's reincarnated soul), is drawn back into the web, as the followers desperately want Soma to either become Dracula-incarnate, or to die and pass his powers on to one of the other Dracula-potentials. Soma has to battle through Celia's castle (built to resemble Dracula's own demon castle), defeating the other potentials and ending Celia's plans for Dracula's eventual rise and world-domination.

Like some games in the series before, Castlevania: Dawn of Sorrow is a direct sequel. The thing that benefits Dawn over other sequels in the series in the consistent, continuing plotline, allowing you to watch Soma's growth as a character, and understand his story and where he's coming from. Christopher Belmont may have had two games, one where he defeated Dracula (The Castlevania Adventure), and one where he then had to battle Dracula again, 15 years later, after Dracula seemed to esacpe from the first encouter (Castlevania II: Belmont's Revenge), but both games were relatively light on plot, and aside from a couple of spots of dialogue, you weren't heavily invested in the characters (heck, all the plotting from the first game was established in an introduction to the second game).

Of course, strong, consistent plotting has become a hallmark of latter-day Castlevania games. Modern games in the series have long, sometimes complicated plots that intersperse and interact with what fans are really looking for: action and exploration in strong, heavy doses. Thankfully, Dawn has the action as well as the story.

Much like the first game, Aria of Sorrow, Dawn of Sorrow features the strong, Symphony-inspired gameplay. Soma returns with his swords, his special abilities, and his soul collecting. As with most Metroid games, Soma reverts to his weak and piddly form, losing most everything he gained from the previous game. Thankfully, he's able to battle through, level up, and collect all the souls he can. The souls system has been markedly improved, though, adding the needed reason to keep collecting souls that the first game lacked.

To start, as you collect souls, you can have more than one of most any soul. The more souls of a type you collect, the more powerful it becomes. This gives you reason to try to find nine of the Skeleton soul -- it may not be a strong soul, but it's easy to collect, can be leveled up fast, and until you get something much better, a handy soul to rely on because of its relative strength. And then, once you're done with souls, you can take the souls and use them in the "Wepon Synthesis" system -- forge the souls onto weapons to make new weapons. Of course, there-in is a bit of a rub, and a bit of strategy: if you like a specific soul, do you really want to spend it on forging weapons, or do you want conserve the souls and wait for a different weapon to come along?

As this is a DS game, some features are added in that are presumably to give added value to the game through use of the second, touch-capable screen, but in practice are simply annoying. "Magic Seals" were included to put the toush-screen to "good" use -- when you get to boss rooms, you'll have to use the magic seals you found elsewhere to unlock the doors (by drawing the provided seal onto the screen), and then again during the boss battle (or the boss will regain some energy). The seals are obnoxious to draw, though, especially in the middle of battle, when both your hands are on the side of the machine. It pulls you out of the game to have to move your hand, draw this clunky picture, and then go back into the game.

The other dual-screen feature has you chipping away at crystal blocks with your finger. Again, this is the kind of feature better suited to a tech-demo than a game where you have to attack enemies with buttons, and then part way in chip away with your finger, before going back to enemies. It's barely used in the game, and in practice just doesn't serve much of a point that some other features (like locked doors) wouldn't have also provided.

These are minor complaints, though. With any new technology, special features will be shoe-horned in just to try and "add value". Thankfully, the hardware is solid otherwise, and allows for one of the best looking DS Castlevania games -- although some of the blame for this may just be with the relative lack of creativity in later titles. Although some areas feel a little flat, there are a number of gorgeouly detailed stages, and some areas feature 3D-polygonal backgrounds, giving many areas a sense of "ooh and ahh" as you scroll through them (seeing towers slowly turn as you venture through sections of the stages was a cool enough effect I ended up spending a couple of moments scrolling them back and forth -- a nice, subtle touch that shows the series has evolved, graphically, yet again). Personally, I love the look of the first areas, the snow-covered town. I know Castlevania has done towns before, but I loved the look of it.

The soundtrack, sadly, is as memorable as other modren entries (that is, not really). Of the songs, only "Pitch Black Intrusion" comes to mind as a playlist-worthy entry. None of the music is bad, it's all just more ambient then toe-tapping.

The best part of the game, though, is definitely the post-game bonus mode. In the first game, if you got the bad ending, Soma would become Dracula. This wasn't integral to anything, and all you had to do was find the right way to finish the game, get the best ending, and that's that. Well, in Dawn, that bad ending is back, but this time, Soma becoming Dracula unlocks the bonus mode -- Julius mode. Those that read my review of Aria will know I thought Julius mode was the best part of that game. It's back, and improved.

For one, it's not just Julius -- as Julius explores the castle, he'll unlock Yoko and Alucard. It's a very Castlevania III mode, where in you can switch between each of the characters and use their powers and skills to your benefit (a Grant-analogue is missing, although some think Hammer might have originally been intended for that role). The characters will level up, there's a real plot during the game, and the end-game bosses are different. This is the mode to unlock and play, and it's worth the price of admission.

Dawn of Sorrow is a stronger game than Aria, and while the "magic" of the series is starting to fade (how many Metroid-inspiried games do we really need?), and that "samey" feeling later entries have begun to get is harder and harder to ignore. Despite this, Dawn makes enough improvements, changes, and fleshes out the post-game content enough that, even if it's starting to feel old, it's good enough to justify its own esistence (later entries can't make the same claim).